I am maybe not the best angler in the world probably not even the best down our lane.  But know one thing for sure about fishing its that you cant catch anything whilst sat on your arse at home.  So after having a weeks holiday without any real fishing as per my Dales diary.  I was determined that the weekend would rectify that.  But after it rained on Saturday all the rivers were up and running.  It stopped raining on Saturday  afternoon but the signs were not looking good.  The EA site showed all my rivers running high . 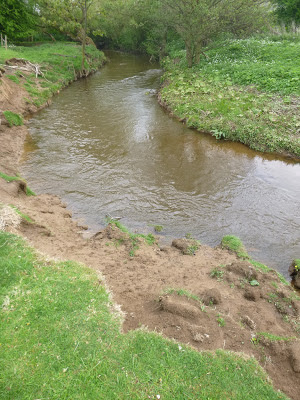 I did have one chance ,  the upper Dove a stretch that is high up towards the moors catchment and a stretch where spates run of very quickly ,  so on the Sunday I arrived around lunchtime to allow a few more hours for water to run of...However on arrival things didnt look good.  Water was heavily coloured and still running above normal. 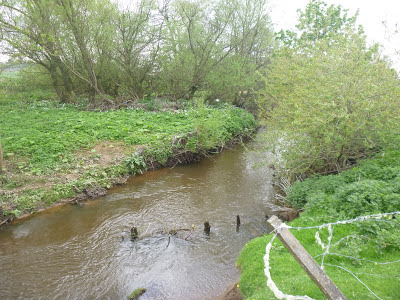 The exposed banks showing how  the levels had been up a couple of foot just 24 hours before. 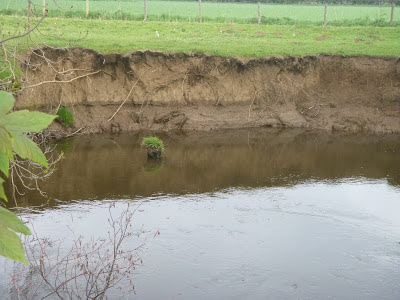 I started by prospecting the flats at tails of the small pools an area which seems to hold fish the soonest when spates are dropping . Prospecting with the duo was my chosen method . Not a method I like but have to confess its effective.  In high water the nymph helps anchor the klink and offers a second chance.   After 10 or 15 minutes a swirl at the klink showed that fish were still willing to rise. So of with the nymph and reduced the size of the klink to this little parachute emerger a 16 I think... The tippet looks like string in the pic but is 2lb10oz reflo power line a coarse angling line but is superb .  I have been using it a few years, its cheap to . Give it a whirl . 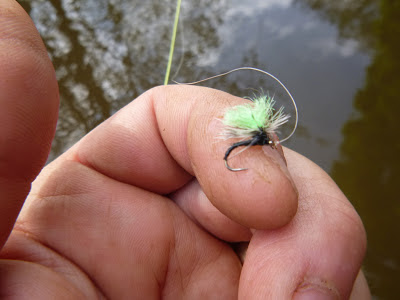 The next hour brought four fish all from the flat run at the tail of little pools .  Although I saw no other rises all came to the surface fly.  These were the best two .  Small but great fun on a three wt outfit. 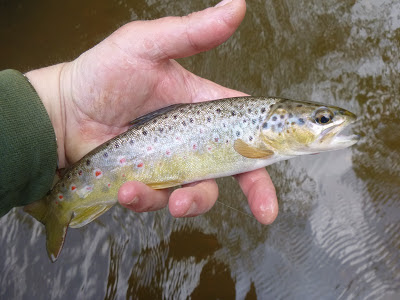 The one below fought like a fish of three times its size.. 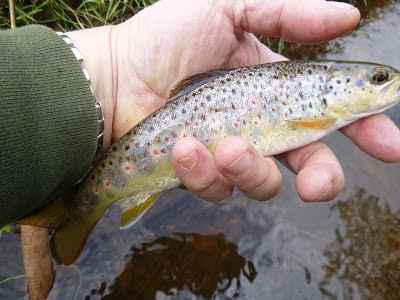 Just an aside this season I have become a convert to the chest pack instead of a waistcoat .  Everything just seems far more convenient  the one I have here is the vision mycket bra , I have no reason to recommend it other than I have used it a year now and it shows no sign of wear despite been generally abused  it seems well made strong zips and a sensible size. Cant see me going back to the waistcoat.  I have even bought a bigger chest and backpack for longer days. 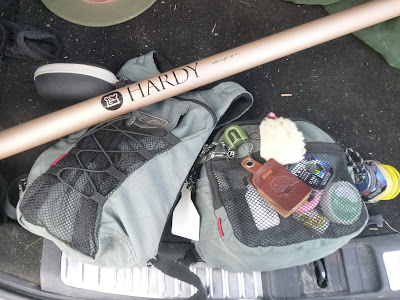 Posted by Becks and Brown Trout at 20:40