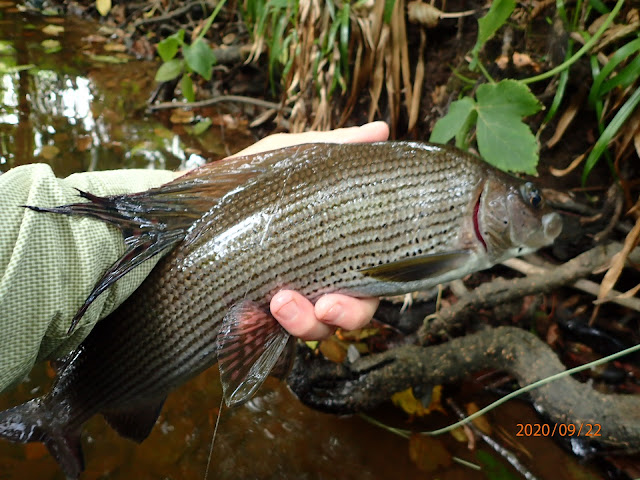 So it looks like the Trout season is done and dusted for the year .   There have been no monsters but a few good ones well good ones for the streams I fish.  The late start due to Covid didnt help matters much . then the August drought slowed things up . Amongst other things that are new to me this season  I have brought the cane rods out of storage in particular one I had built a few years ago and didnt really bond with it.  Getting the right line for the rod has brought it alive and have enjoyed the feel of a fish on cane rod and casting a silk line and am now looking forward to next season  and getting used to the feel of cane and silk and hopefully getting to understand what I want, then I plan to invest invest in a bespoke rod.  Cant help but worry that I need to go through the learning curve again.  The last ten or 15 years years has seen so many carbon rods come and go as I worked out what was right for me .  I dont want to make the expensive mistake with cane and have the wrong thing built. 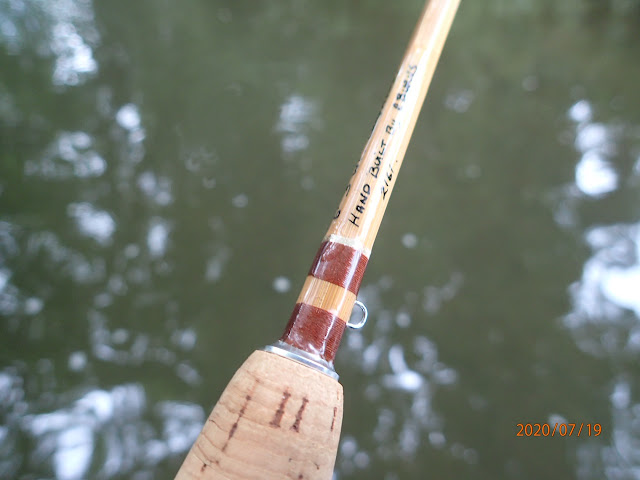 Anyway the truth is although the trout season finishes next week apart from potential sea trout in my local stream during October thats my trout fishing finished for the winter. its likely I wont do much sea trout fishing as my enthusiasm for chucking metal about or spinning as the afficionado would call it.  I know its effective but i really struggle to be enthusiastic about it.   Although I confess that I have been known to put a hildibrandt spoon on a fly rod , now shame on you the crowd yell take him out and flog him jeer the fly only crowd.  But it is legal and it is very effective and I can sort of kid myself that at least I caught on a fly rod it also lets me dibble a lure in the places the guys with the Mepps tend to walk past.

This year I have joined a new club well actually two and will look forward to them again next year . I have enjoyed not catching more than the very occasional stocked fish and have loved the wild fish that populate the streams .  So looking forwards now  the door to the trout season has virtually closed as this weekend has been a mixture of a blowout and a washout as the storms hit fairly hard in these parts  So the little chap below is likely to be my last Trout of 2020. The aphid pattern in his mouth and the fallen leaves on the water tell their own story. 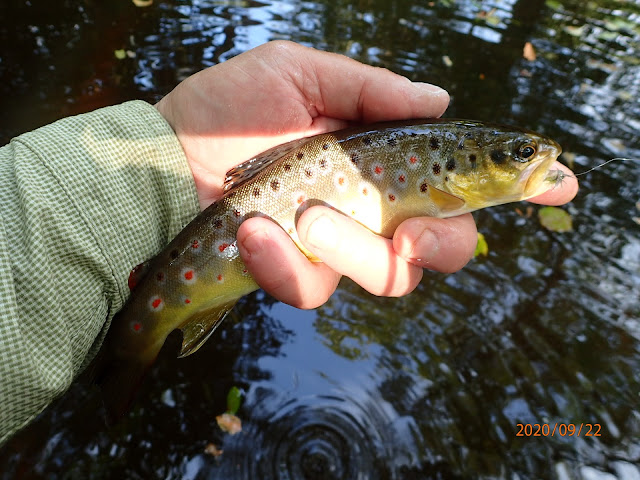 So it looks like the end of the trout season for 2020 will be remembered for me by the quality of the grayling I have caught in the last couple of weeks , it also heightens my level of optimism for the next months . All the rivers I fish have Grayling but there are two particularly ,  one would seem to have a particularly healthy population  of fish that run to decent but not exceptional size the other seems to have very low population but with some real clunkers that show up from time to time .  the one at the top is an example. Variations on this theme have been doing well for this year .  Or a silver beaded version .  Size 16 and 18. 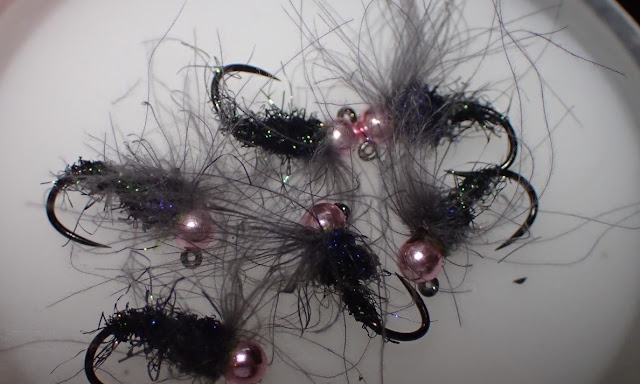 Despite what you read or some experts would have you believe a 2lb Grayling is a very very special fish I fished for many years before I found one, a 3 lber is a fish of a lifetime and certainly something that will probably evade me  and anything over a pound and a half is a real specimen.  I think that sadly Social media and magazine reporting has given many an unrealistic view of what fish they could reasonably expect to catch to some extent with Grayling and most definitely with trout .  This then drives pressure on clubs and other fisheries to stock,  As I said in my last post it surely cannot be coincidence that the two rivers that I fish that are completely un stocked are the ones that consistently deliver the better fish .

Summer is leaving Autumn is coming...

Catching this fellow at the weekend reminded me that the Trout season is nearly over .  Due to Covid  the Season has been the shortest one ever.   But what there has been has been of good quality .  My little North Yorkshire Streams have been in fine form for the majority of the season .  With a short period in August when the streams became very very low and the fishing dipped a little . But the quality of the fish has throughout been superb. 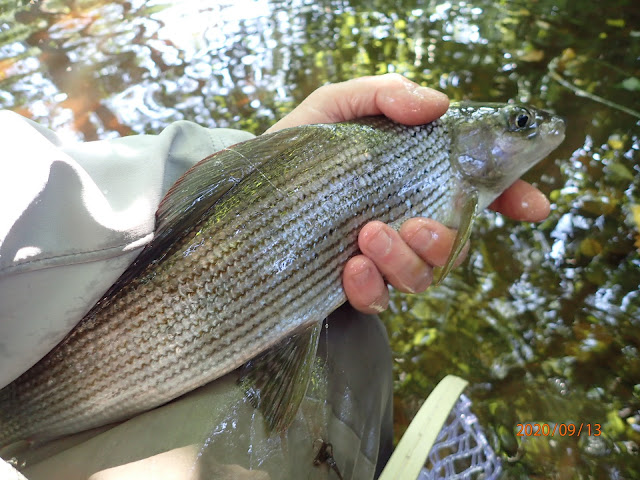 This stream has produced some wonderful Brown trout . Pristine and wild they are a pleasure to briefly hold.  For the first time in many years I can say that the number of stocked fish I have caught has been less than the fingers on one hand. That alone has given me immense pleasure. I have over the years fished nearly all the Vale of York streams ,  It surely cannot be a coincidence that the un stocked ones have a greater fish population and also better average native  fish size . 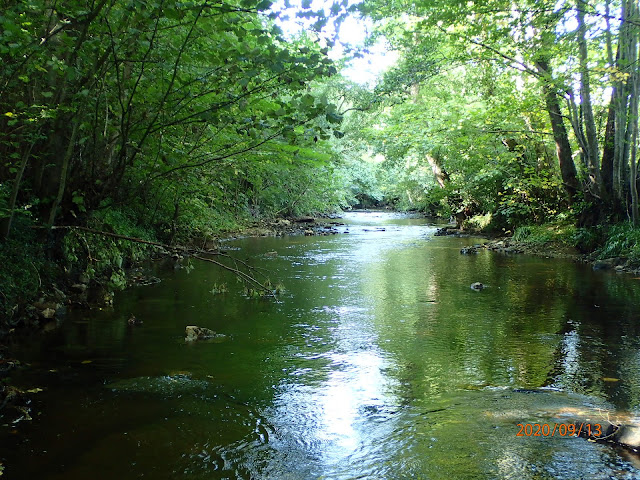 this is an example of what a proper wildie should look like and on a two or three weight rod they are great fun this was out of a stream that is only about 3 - 4 yards wide... 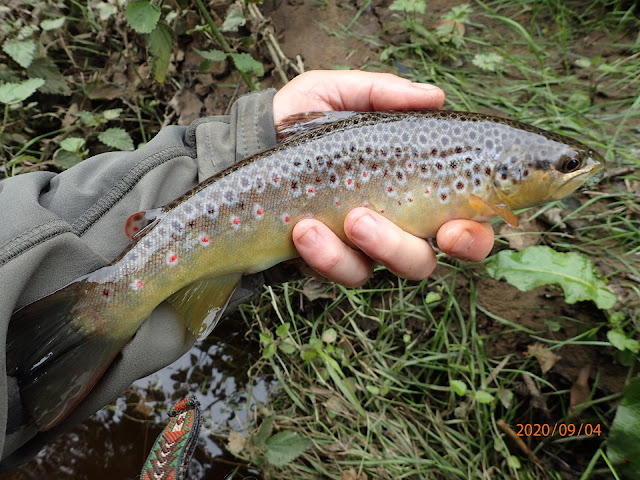 This was my best trout at the weekend . They are still rising freely .  They do not give themselves up though , they are very skittish and careful wading and casting are the key. 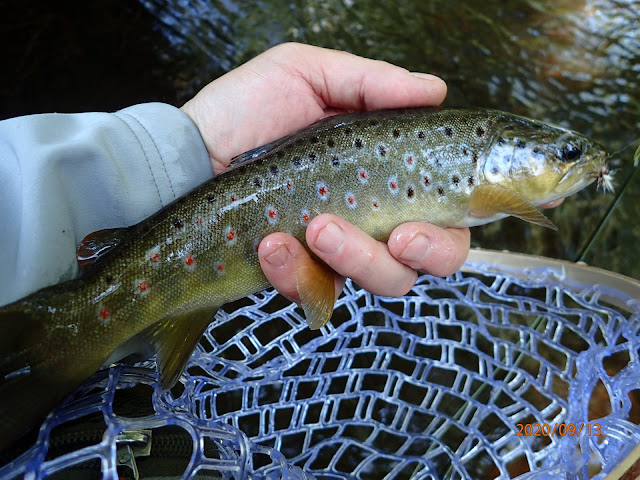 So as we move towards the end of September its goodbye from the trout and hello to the Grayling.. 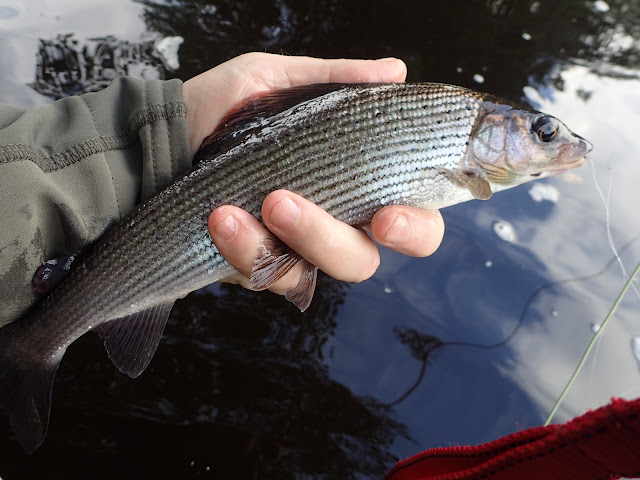 Although not the biggest this sis the stamp of fish that I encounter all the time .. It is going to be a good winter