Funny how things turn out.


Yesterday was a lesson in how you never know how things are going to turn out.  After only realising at the weekend that my daughters passport was out of date and us travelling abroad very soon ( I know I know such things shouldnt happen but its a long story) . Anyway I had to reschedule my already very busy works diary around when I could get an appointment at the Durham passport office to get a 4hr passport turnaround.  I really wasnt a happy chap knowing that my day was ruined and that I would be hanging around Durham for at least 4 hours.

But then the penny dropped and I remembered that I had this spring paid to join a small angling club up that way with fishing on the river leven.  The leven was where I caught my very first trout on a fly way back in the 1970s and havent fished it since .  It was an itch that needed scratching .  It would be about 30minutes to drive from Durham to the river and I reckoned I could easy squeeze in a few hours fishing. Id heard the stream had grayling. 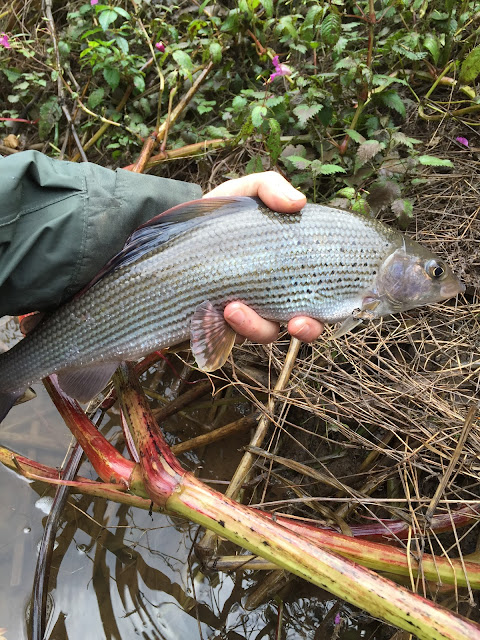 Well kit was loaded and following my passport office visit I shot of down the A1 . I had never fished or even seen the stretch of river and arrival it was certainly a little larger than I remembered but it was a long way downstream of my old stamping ground.  Parking  at the bank I was foolish enough to answer a phone call and ended up back in work mode for 30 minutes.  I then got kitted up and headed off to inspect the stream. Very wild very overgrown and steep banks but it did look fishy.  After walking downstream for a while I fished one run and blanked ,  A little further down I tried another nice looking run. Straight away I was into a small grayling then a better one of probably a pound which hook pulled when at the net.  Another couple of casts working up through the pool resulted in no fish but my feet told me where the deep point was in the pool and I probably had walked through the best of the fish. 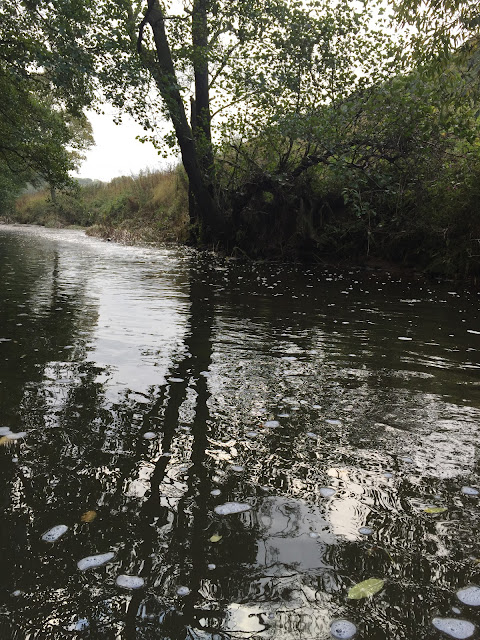 Anyway after walking downstream a while and only having a couple of tiny trout to show I thought I would head back to the car.  As I passed the pool I had caught in earlier I just thought I would work through it again as I reckon I had not fished the best line the first time.  Second cast in and wallop, trout I thought as something very strong hooped the 9ft 3wt around.  The as the grey flank showed I though shit better be careful.   After a fair scrap I only realised just how big and fat the fish was when I drew it to the net and realised its head was halfway up the handle before its tail was over the lip.  At the second attempt I netted it . Note to myself buy a bigger scoop net. The scales went exactly 2lb1 oz. Couldnt beleive it.. Waited a long time for a 2lbr and to catch one in a Northern stream made it even sweeter.  After writing last month that the season hadnt seen one notable fish I would like to retract that statement. PS sorry about poor pics, I had such low expectations of the day I didnt even take my camera, So pics courtesy of my iphone.


Posted by Becks and Brown Trout at 13:24 No comments:


Well it's that time of year again , its the time of year when I try convince myself that this is the start of the Grayling season and not that my season has ended, I try to convince myself that the trout season closing doesn't matter even when I know it does ,its the time of year  when I reflect on another summer passing and think about its highs , lows and memories.  This year I struggle to remember a single fish that was out of the ordinary, Those highlights that come to mind are those little victories and successful skirmishes that are a part of every day on the bank,  That almost perfect cast , the successful stalk, the fish extracated from that impossible lie.  The time when you knew a fish would be hiding in that current crease and the cast produced an instant response,  You will notice that all these things are about the moments before the capture.  Of late the result its size and ensuing battle seems somehow less important.  Not sure what has led me to this way of thinking. Perhaps I'm getting old. 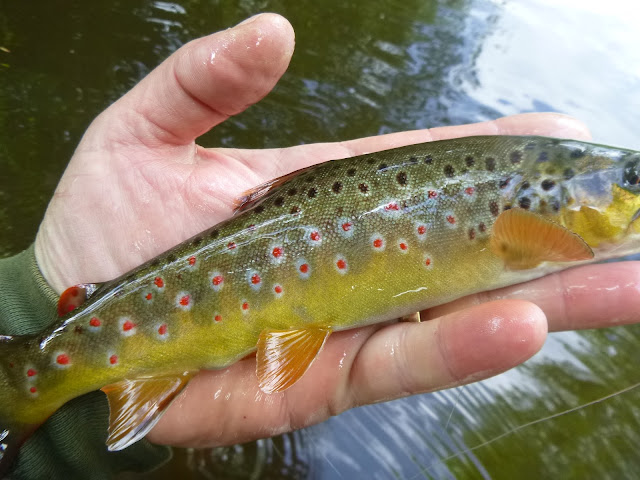 Also this last year I have found greater pleasure in fishing with companions and have also grown increasingly intolerant of the on line community. Why does the on line world and in particular social media so often seem to bring out the worst in people?  For many years I enjoyed membership of an on line fishing forum . Increasingly I became frustrated with the trolls the cliques and the chest thumping idiots not to mention the hypocracy, I had enough and left. I have at times even wondered about keeping the blog .  But the great thing about a blog is I can sit here in the lounge right now and say what is on my mind, I can type rubbish if I want, this may even be rubbish but I'm enjoying writing it and I hope that just perhaps someone may read it and nod or smile to themselves take some pleasure from it and make a connection.   Perhaps they may read it and say whats the tosser talking about ?, But I wont know so I wont care.

Over the years many people have collared me either on the bank or in a club meeting and said. " Are you the guy with the blog"? .  In all but one case I have been told how much they enjoy reading it and to keep it up , perhaps they were just been polite but for you guys who read it , thanks. Those comments mean a lot. For the one guy who told me he thought it sucks, well I repeat what I said on the bank , "Dont F......g read it then". There is the pleasure of the blog I get to enjoy the writing and don't have to worry about critics and trolls.


This year the rivers have been very very low.  Two years of low rainfall have sucked the life out of the local streams . Sport has continued though. tiny flies and fishing the skinny water and broken riffles where the oxygen levels are better has paid dividends.  Fishing into the early dark has paid dividends too. It has also demonstrated to me how important the maintaining of a wild fish population is .  Where the stocked fish have disappeared for weeks on end skulking in the dead deep pockets the smaller wilder fish have continued to feed.  Strange thing is catching smaller fish  hasn't bothered me.  I confess whilst not been a anti stocking evangelist I do get more pleasure from the capture of a wild fish what ever its size.  Its a strange thing but its important to me. I confess I puzzle over the conundrum of stocking and how even among anglers who are mad keen on maintaining high levels of stocking a fish that is newly stocked is often looked down upon by many." Just a stocky "  we have all heard it said. Funny thing about new stockys its like dating a girl of easy virtue. Great at the time but when youve done it a time or two its all just a bit easy. Yet a stocky that's been in a year or more and had chance to grow back its fins is somehow different and worthy of a grip and grin shot.  Same fish but the year or so its had in the river has perhaps eased the anglers conscience and wised up the fish.

Truth is I suppose none of it really matters what matters or what should matter is the enjoyment we all gain from those hours we spend on the river bank or in the river. I guess the truth is for this angler. Fly fishing has become about the battles and not the victories its about the preparation and fly tying. Its`s about the fishing day, the bugs in the river and the birds in the trees.  Whilst saying that a 2lb Grayling still eludes me and knowing what it would mean to catch that fish.   I would fish in a ditch with Jeremy Corbyn. So I guess once again I am talking bollocks.