Thursday was the first day of some holiday so 6ft Brook rod in hand went of to visit one of my favourite becks .  This is a small beck quite high up towards its catchment.  It is right on the edge of the North Yorks moors . The NY moors railway runs virtually along the bank at times . 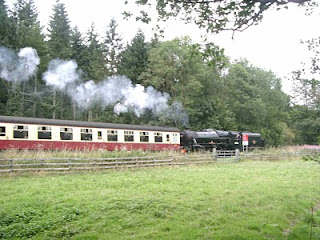 There cant be many places where you fish where you get trainloads of people waving at you as the chug past . At times the river bank is only a few yards from the track and the noise and steam can be quite something. This is a delightful beck with good fly hatches , today there was many stonefly around even before I had set of there were good numbers sat on my car..This is just one of about a dozen that started sunning themselves on the car roof..So at least I knew what fly to start of with.
Down at the beck the recent rains had freshened the flow but it was still well down on usual summer levels . Gravel banks and tree roots normally covered were high and dry.   The trees however were as lush as ever waiting to catch any waywards casting . it took seveal minutes to get into this position which allowed me a cast at fish that was rising under the bush to the right.  You get maybe a couple of chances before the fish spook and with all the trees waiting for wayward casts or back casts its nice when you get it right and the fish do there part to, As it turned out they didnt want a stonefly imitation.
They are the prettiest of wild browns perfect in every way and none have ever seen the inside of a hatchery .  This one took a small erics beetle a cracking little fly that still seems to work especially well on these tight overgrown streams . The afternoon went pretty much to plan walking along the bank and dropping down into likely reaches as silently as a overweight 50 yr old can do,  Wading upstream between pools just sends spooked fish charging upstream spooking every fish in the place.
The colours on these fish are truly splendid the reds in the spots are of a depth that only the proper wild trout show
The afternoon came to end after about three hours of fishing lots of perfect little browns and wonderful scenery and even did a bit of waving at trains... 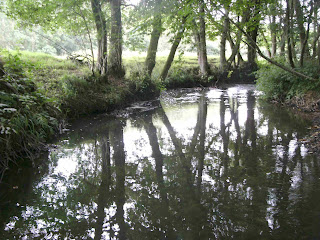 Posted by Becks and Brown Trout at 16:37 No comments:

A Trip to the seaside

My local Scalby beck runs out to the sea just a mile from my house and when the holidaymakers arent to numerous its one of my pleasures to start fishing on the tideline and work upstream. Today ( Sunday )  I had about 2 hours from leaving the house to walking back in again to enjoy the benefit of living close to this little jewel  Apart from the sea trout that run the river when the beck is in spate the river holds a resident population of little browns .

The view from the beck mouth:The sea is calm tonight but still cold after all Norway is NE of here and the North Sea is cold even in the summer.After the Summer Drought that has seen this little beck run dry in some places the last few days rain has put just a little flow back in it.The Sea weed that you can see marks the high tide mark from the recent Spring tides , Just a shame that the river was so low or the sea trout would have run upstream.  The beck can have good runs of sea trout but is heavily dependent upon good water levels 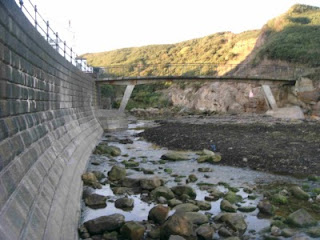 The wading on this beck is difficult as the bed constantly changes and is full of loose boulders and shifting sands and beds of mudstone and silt pockets .  This is the view up the vally just 50m up from the footbridge in the above picture . 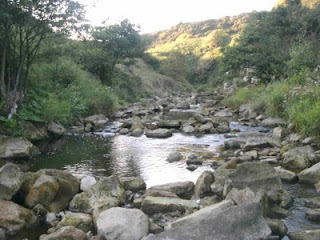 The fishing can at times be easy as the little wildies are hungry and are rarely fished for , They seem to like nothing better than a dry red tag or treacle parkin a size 16 or even 14 is taken freely by the smallest of fish . The pools here are tiny an area the size of a dining table between the boulders will hold a resident trout .This little fellow came first cast into the pool above.  Sometimes  when you fish here you will swear there isnt a fish in the river. 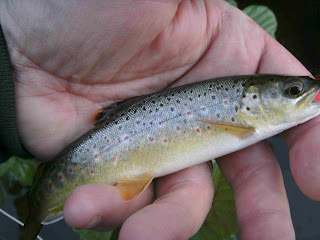 The beck is largely hidden in a steep valley and twists and turns,  This means the wind can be blowing hard and yet you can find shelter just around the next bend. The next bend reveals a lovely tiny pool that usually gives a fish or two. 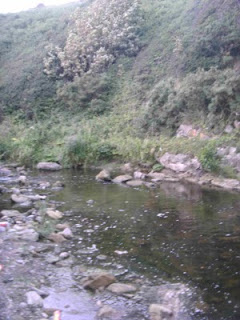 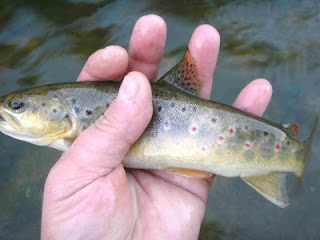 A red tag size 16 was his undoing I fished on for a while ending up in the largest pool in the stream. A long deep dub ( well deep for this beck) caused by several large boulders that long since formed a bit of a dam and created a large deep glide that forms a lovely holding place for the sea trout when they first run in from the sea. I caught several fish in here in rapid succession all 4 or 5 inches long and all on the red tag. 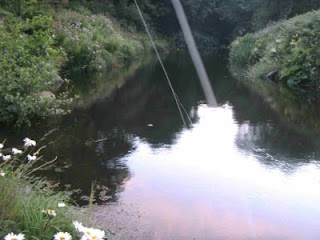 The evening ended shortly afterwards I spent the last 15 minutes of daylight watching the beck. As the colour went out of the countryside and the bats took to the air over the water I decided that there really cant be a better place to be,,
﻿ ﻿
Posted by Becks and Brown Trout at 22:20 No comments:

Along with the wild little becks and brooks I love to fish one of the clubs I am a member of has one section of water which can best be described as very civilised manicured angling.  It is extremely popular and heavily fished . This Sunday there was a work party I could get to and it was on this very stretch, At 9AM I parked up and saw the assembled members.

The work Party today was gentle stuff Litter picking and removing debris from the river. Also the removal of a post and barbed wire fence which I was told was put there to protect the the lady members from the bullocks in the field... Personally I would leave much of the debris in the river as its great bug habitat.  However after a few hours of general tidying and manicuring the work finished for the day . As I had the chesties on and the gear just happened to be in the car I waded in at the old cart bridge .

I waded up stream until I was insite of the fishing hut complete with seats and rod racks for members to partake of the sunshine,  The Hut is there as a memorial to a past member and benefactor of the club who did so much to make the club the success it is today. 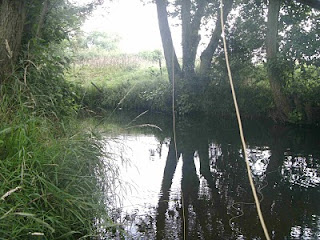 On this weekend is a very heavily attended steam fair there are tens of thousands there and this beat is right on the edge of the town. Many of those attending seem to enjoy poaching the river using any means possible , I had a length of 10lb nylon round my legs with a size 2 mepps on it at one point , The taking of fish is bad enough but very many small wild fish had been killed and there carcasses dumped on the banks , such a sad waste of a lovely creature.

In the corner by the tree stump was a small pod of rising fish and after many casts and much cursing a erics bettle pattern dropped right in under the bushes resulted in this chunky brown, After making him pose reluctantly he was released ... 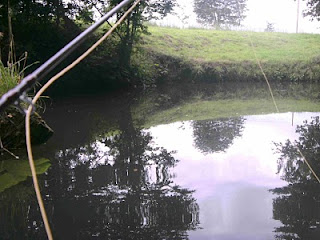 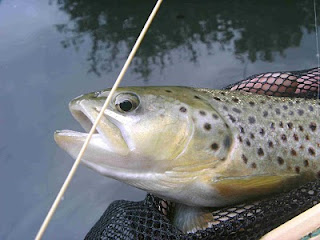 Although this isnt  my favourite stretch of water its make a very pleasant interlude on a Sunday afternoon.. Right now away home for the roast beef and Yorkshire puddings...
Posted by Becks and Brown Trout at 22:32 No comments: