At the moment it’s all a bit surreal, the new trout season is upon us.  the weather is sort of like springtime.  Well, it’s cold enough with regular morning frosts but we have nearly finished the month and the April showers have been pretty much non-existent. As I start this post today it is the 27th of April and last night was the first time for many weeks, I have heard rain on the roof.  Fairly short lived but rain none the less. At the weekend the rivers were as low as you would expect in August at the end of a long hot summer.  So, we need rain and a fair bit of it. 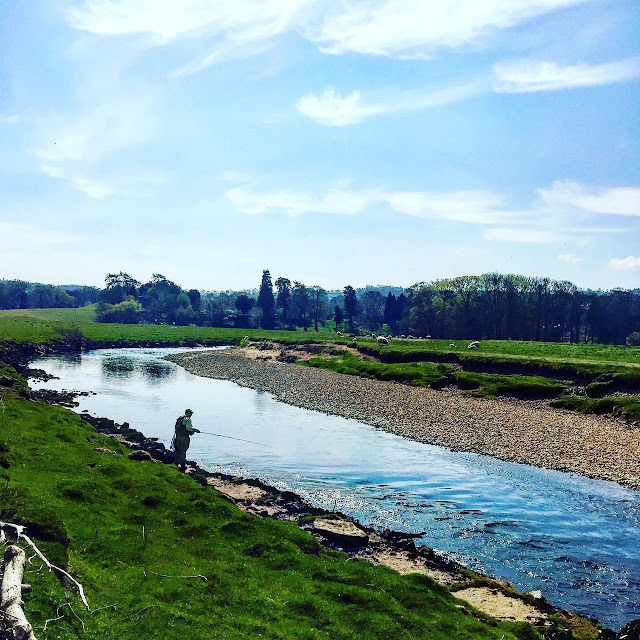 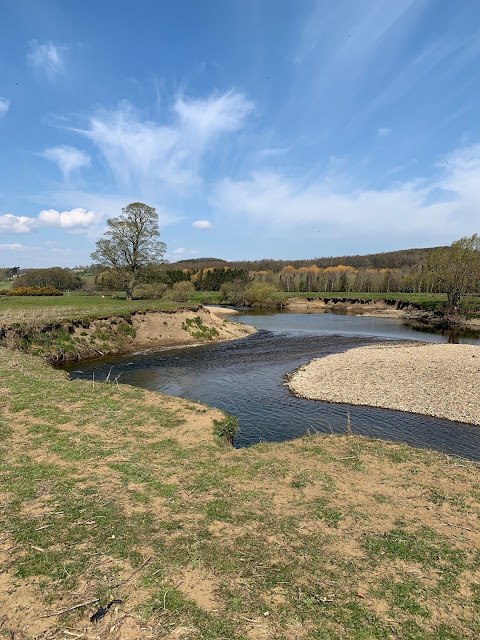 At the weekend I had my first day when I saw a reasonable number of rising fish, Well thats sort of true its the first time I managed to catch because actually about 10 days ago I had a trip over to the Yorkshire dales with my Son. We saw rising fish, but I managed to drop 5 on the bounce releasing them at distance not the example I wanted to set him.  He has fished before, but he is still a beginner and struggling somewhat with casting and I am a rotten teacher, I have also explained that he is probably learning to fly fish the hardest way. Small unstocked wild streams, difficult casting, spooky fish and under very difficult conditions but he is enjoying the experience he is already an outdoors fan.  So, trying to instil the whole holistic fly-fishing bum thing isn’t really an issue.  I reckon he was born an angler I just need to help him develop the skills.  Apart from that the places I fish are so pretty I can’t think of a better place to struggle to learn new skills. 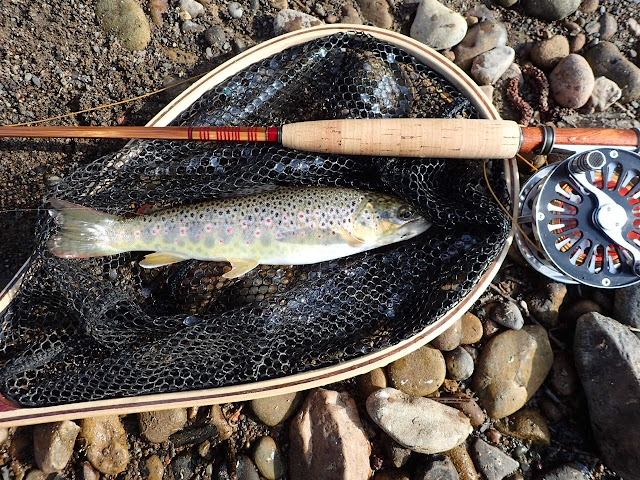 When I have been fishing then the bamboo  rods are getting a workout, I apologise I should have used the English term"split cane" I am reading Gierach at the moment and I guess I am been Americanised .  I have a few Cane rods now, a pretty mixed bunch but all very enjoyable, one thing I have realised is that for a long time I sort of dismissed cane/bamboo as a bit of a nostalgic exercise and not really a serious fishing tool.  But after fishing them for a while now.  especially with silk lines I see them as a serious alternative and not just some sort of romantic throw back.  Over the last few years, I have sought out and fished with rods that aid delicate presentation and good close-range casting, rods like the Orvis superfine series and the delightful vision cults, using them sometimes at 2 wt.  These rods are sometimes stated to offer a classic traditional action but with the benefits of up-to-date materials.   The truth has dawned on me that they do some of that but not nearly as well as the real thing.  For sure if I am down the river at night after sea trout or putting out longish lines on big rivers with a 9 or 10 ft rod, I will be sticking to Carbon. But on small streams I am rapidly being converted to cane, it seems to me that the sweet spot for them is from 6ft through to 7ft 6inch in the 3 to 5 wt range. 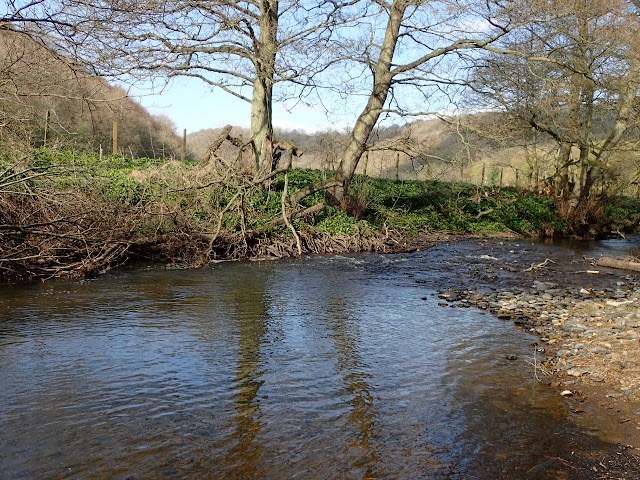 Alongside that the silk lines have been a revelation I have bought a few but the Terenzio and Phoenix are superb. brilliant straight from the box.  I hadn`t realised just how good they are for roll casting until I started using them they are better both in terms of casting efficiency but also much less water surface disturbance the fact that silk lines repel water due to their coatings and therefore sit on the surface film and are also smaller diameter, whereas the thicker plastic lines use displacement as old dear Archimedes.  For overhead casting they cut through the wind far more effectively.  The downside is that they are more expensive and need a little more care but will last for very many years. Although after seeing the price of the new Rio lines the price difference is not that huge anymore.  They have created an additional problem though.  I have a modest collection of carbon rods that I have honed and perfected covering just about every option I need.  In the past I have tended to move on a rod every time I got something new. This is now complicated by Son and Daughter needing gear but also the newly arriving cane rods are duplicating Carbon but offering something different.  I guess I just need to get better at hiding rods from the Mrs . 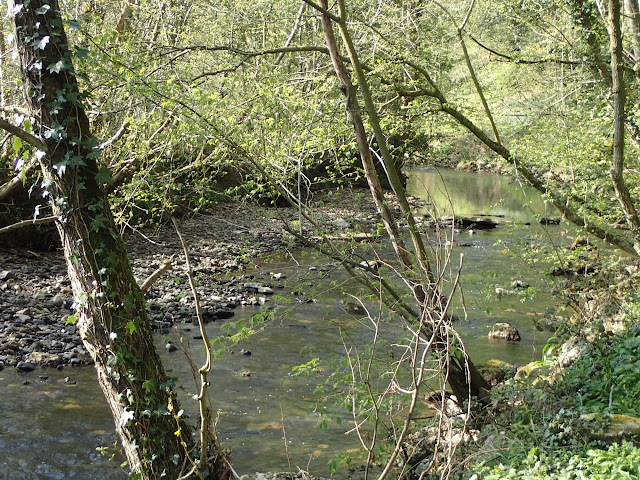 Things are looking up...

So here we are then nearly a quarter through 2021 , a year that has a bit of a George Orwell feel to it what with Covid , Social distancing, mass inoculation on top of all the usual troubles and  rumblings that go on in society .  Brexit which was forecast to be either nirvana and the road to the promised land or a slippery slope to hell. Has as to be expected has turned out to be like bad tempered divorce with both sides claiming the better deal.  But really has passed almost seeming inconsequential compared to the Covid impact..  For the Americans that read this blog and I know there are a good few of you ,  Brexit ( or our leaving the EU )  is turning out to be a bit like that time when you have to go to your annoying neighbour and ask for your lawn mower back , and the ladders , the socket set and then say I have no problem lending them to you again but we need a whole raft of rules in place which actually make the whole process almost not worth the bother.   You are quite happy to live next to your neighbour but am also happy to see a bit less of them . Anyway enough about illness and politics  here are a few pics from my first trip of the season . With my first fish of the season a little sea trout smolt that snaffled my nymph. 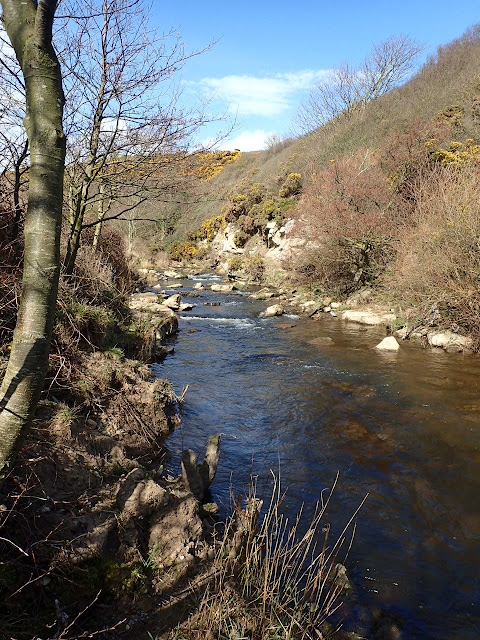 So back to fishing, for me this season is a continuation of how my fishing experience is changing and developing. Over the last year or two pretty much all my fishing is now wild fishing  I would cut out all the rivers I fish that are stocked all but I am very attached to one of clubs and feel I just have to stay with it. My first few trips have been pretty dire, rivers here are very low and gin clear with little insect life and very few rising fish it has been a miserable start to the season. 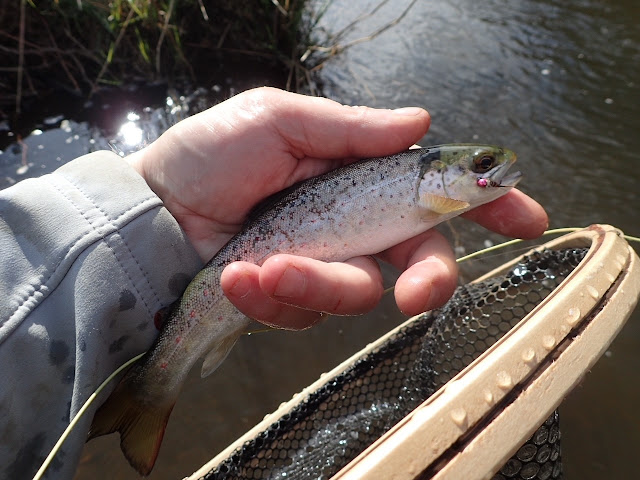 Looking forward . At the start of every new year I sit and get out all the fly boxes and look at whats left after the carnage , generally my view is if there a corner of flies that look like they havent been used I probably wont bother for next season.   Over the last few years CDC has played a bigger role and traditional dry hackled flies have receded ,  also tiny Deer hair sedge patterns have seen lots of success and use. So there are more of them for this season.  I am forming an opinion that flies that essentially sit in the film like CDC F Flies and emergers are less prone to drag I suppose it obvious that having an anchor in the surface film is bound to make a difference,  I know Micro drag sounds terribly high brow ,  but I have come to the conclusion that even microscopic amounts of drag will make enough difference .better anglers than me have been saying it for years it just takes a while for an average angler like me to catch on.   Also I have had more success on very small streams with spider patterns , generally fished directly upstream and on very short drifts , previously this was a technique I saved for bigger rivers .  Only if there was a very strong rise happening to up wings would I use a hackled dry .  First choice would be a CDC IOBO. 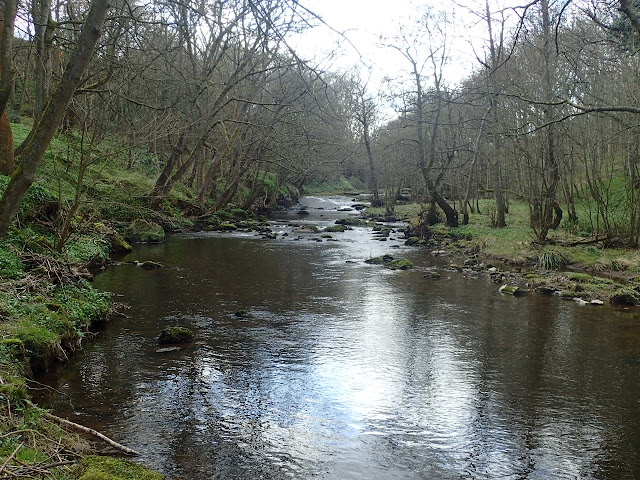 Also my angling approach is changing ,  I have now got an increasing collection of cane rods, traditional reels and silk lines.  the silk lines are a revelation .  They roll cast superbly and due to the lower diameter they cut through the wind delightfully and land so delicately I haven`t looked at any of my two weight rods all last year.  I have silk lines from  three different makers ,  Terenzio , these are superb and work beautifully straight from the box .  I have a Thebault level line which was the first silk line I bought and excellent line for faster water .  I have also bought a couple of Mr Moxons excellent lines ,  these seem to require a short period of breaking in much in the way your new leather walking boots need a bit of a beating before they feel part of you . But I have DT 3 silk from Mr Moxon I have used it three of four times now it is still a little noisy through the rings but it casts very nicely and love the taper on them . These are available from my Good friend Richard at :https://www.barbless-flies.co.uk/products/ian-moxon-silk-fly-lines-made-in-sheffield-uk

I did flirt with the Wulff bamboo fly line and although it worked well enough I prefer the silk, I suppose largely influenced by the fact I see bamboo and Silk as a dry fly tool.  To be used on Spring days and Summer evenings .  If I intend to fish the nymph to a great extent then I will get a carbon rod out of the car boot. 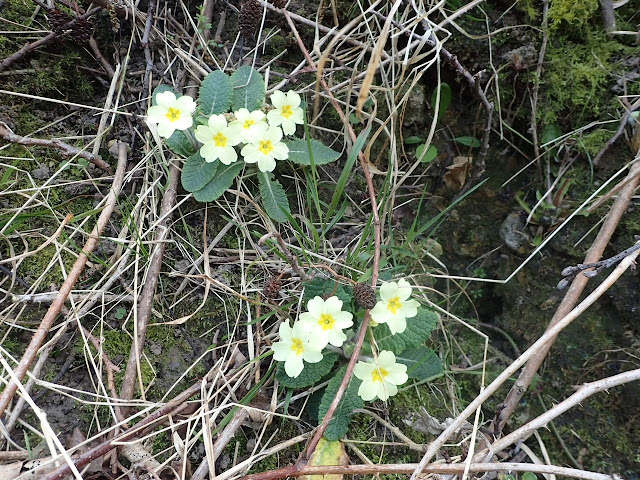 there is a lot to look forward to this year , starting this Saturday when I feel that a trip to the Ure is on the cards .