Home water at the close of play

The trout season is just about over now,  in fact looking at the weather forecast and my diary for the next weekend I think its unlikely I will be fishing for trout again this year.  As visitors to my blog may have already learned I do like to start and finish the season on home turf.  This little beck is 5 mins from my door and has been a companion either as a playground or more for nearly half a century.  It is very very low at the moment but I felt it had one more days fishing for me it was a day for soft footfalls and long leaders... 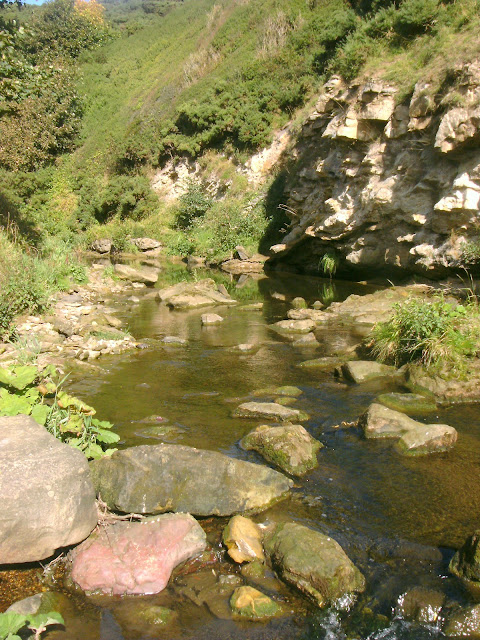 I like nothing more than to start on the beach and walk upstream I have caught many trout in the first pool up from the beach a freshwater pool full of sea weed from the high tides. But working upstream the beck changes from an almost upland beck falling quickly along a rocky valley to a tumbling stream hidden in a tree lined valley all that in less than a mile. 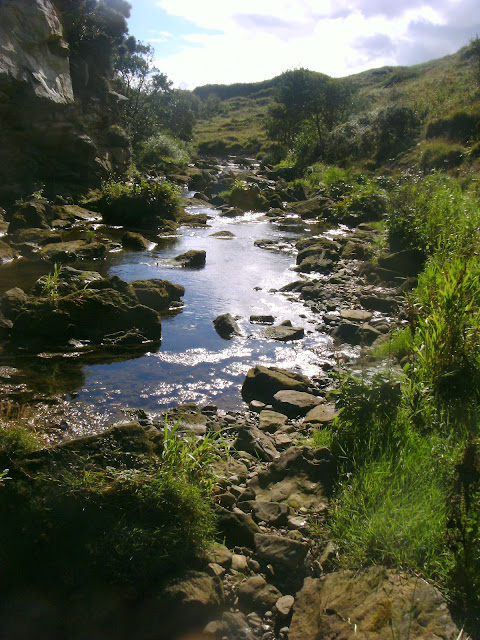 The trout here are small but beautiful.  Rising freely to a well presented fly but soon hiding from a careless footfall.  Usually you get one chance at each little pool , the leader should be the only thing that lands on the pool in fact I often aim to drop the fly line on a rock at the tail of the pool so as not to disturb these tiny little oasis.  If you miss the first rise you rarely get another chance so you have to keep moving ...


Within half a mile it chances from the beck above to the one below. Here it fishes like a totally different stream .  The fish hiding in the roots and dubs that are often no more than a yard wide.  The wildlife and plants change from  the wild orchids and slow worms of the open banks to the dragon flies and deer of the valley sides. 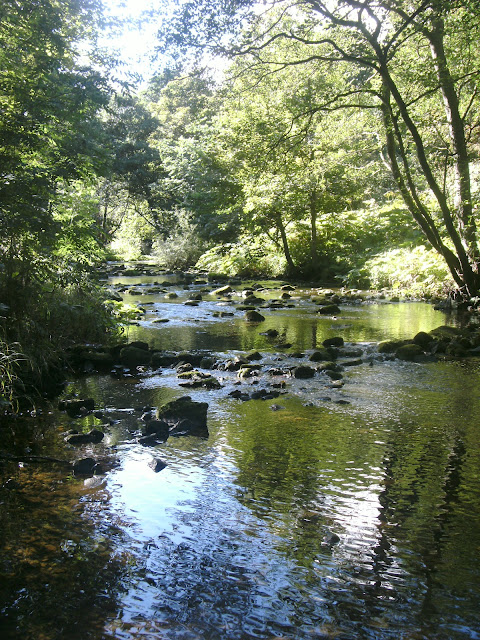 Pools like the one below start to develop after a few hundred yards into the woods the resident fish here are small rarely over a pound but they test the reflexes of anyone rising quickly . Today the fish rose well to a size 18 red tag. I reckon I hooked a third of those I rose. 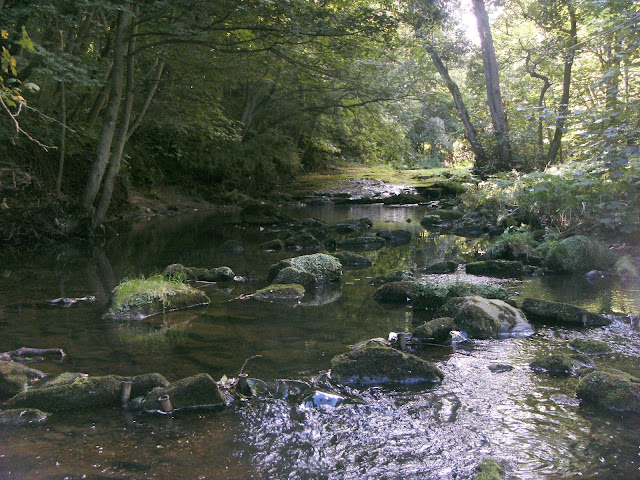 When you do manage to persuade one to join you this is what they look like :  Perfect small wild brown trout  full finned and beautifully spotted. just as nature intended. 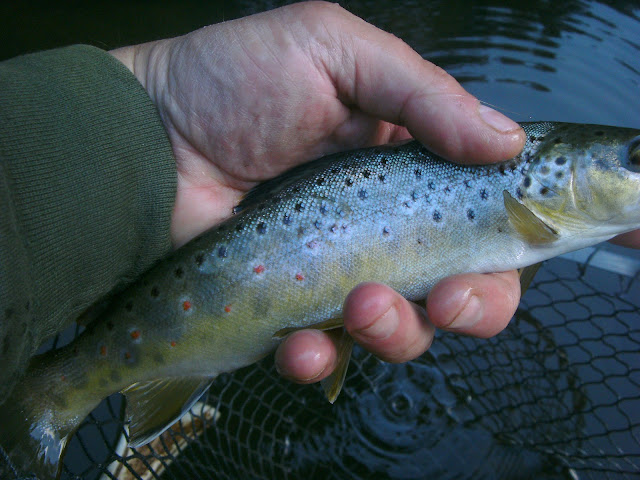 Personally I cant think of a nicer way to sign of another trout season . A good match on home water. On a beautiful September day.  Now its Grayling time bring on the lady of the stream.... 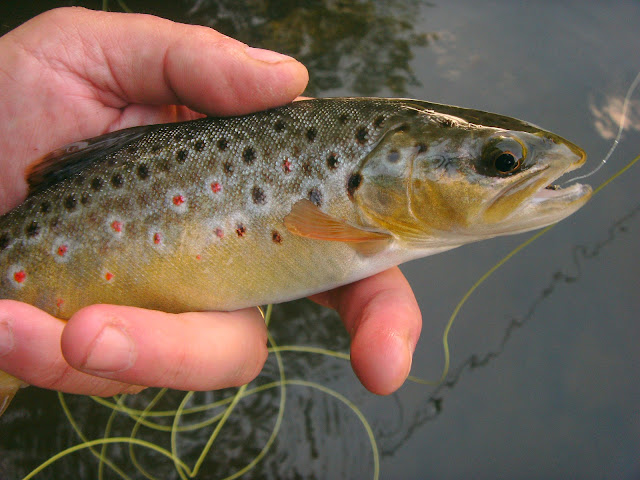 Well the trout season finally got under way , there is three weeks to go before the end of it but today I felt that the trout season has finally started .   In September you have to take the opportunities as the arise . Sunday the weather was set to be fine, My wife was working so I had the chance to escape for the day . When I arrived at the river it was low , in fact very low and very very clear .  Bright sunshine and the gentlest of upstream breezes with little rising .  It was going to be a tough one. 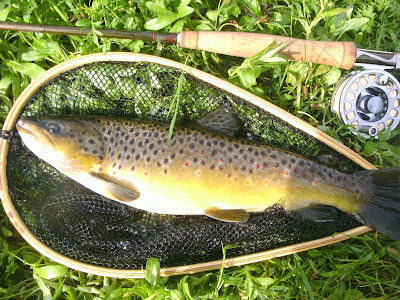 Recently I had been outfished by my guest who was using a leader to hand set up.  The river here is difficult to fish drag free.  Many current lines across the river mean that achieving a  drag free drift is pretty hard unless of course you are directly downstream. I have been toying with french leaders for a while and been out fished a week or two ago had put the method back in my head.  looking at the river today I knew any edge I could get with presentation would make a real difference.  So a Greys Streamfllex 9ft 6 inch 3 wt was armed with a 3wt line with a 9m Hends french leader which was sightly cut back with about a 9ft 3lb tippet added .  I decided to really give it a whirl. 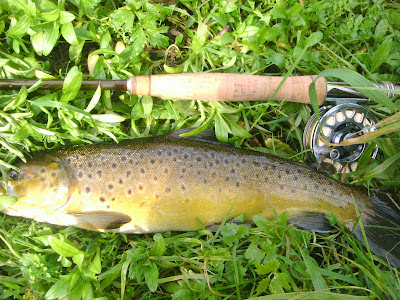 I have only used the 9ft 6 rod a handful of times since getting it in the summer in readiness for the grayling this winter.  It has impressed me.  I have really enjoyed fishing it.  The added length really helped control the line and with the french leader holding line of the water was a doddle.  The slight upstream breeze was just enough to help rather than hinder and I was very impressed by the delicacy of presentation the method allows. Things need to be slowed right down but casts can be manufactured .  Careful wading was required in the low water but once in range the lack of a fly line allowed supremely delicate presentation.  I am sure that the method made a huge difference on the day. 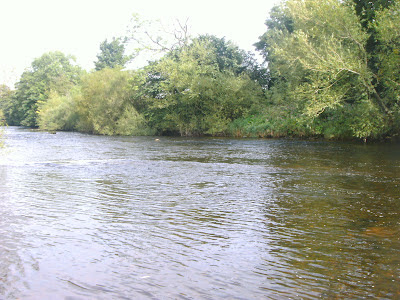 The fish were spread right across the river I had quite a few smaller grayling and about 20 brownies with the best of them shown here.  I even had a few salmon parr. Many of the browns are showing signs of getting ready for spawning cock fish are starting to get kypes and females looking heavy bellied. All the fish were returned, the better fish after a quick snap. 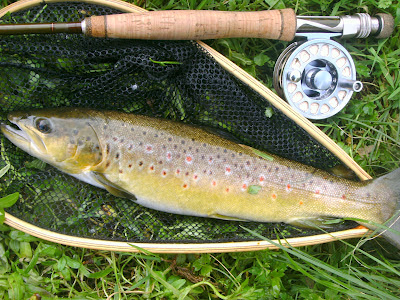 It has been a long time coming this season , the season started poorly with low water then for a couple of months it was a wash out.  The mayfly after so much early promise with the sheer numbers of nymphs in the sampling ended up as a non event.  The rivers have been up and down like the proverbial hoers drawers .  Its been a season that so far was very forgettable.  So it was great to have the sort of day that you can look back in the winter and remember with a smile. 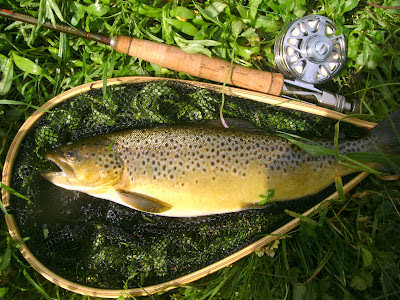 As for the french leader, well on the day I reckon it was ideal and made a huge difference and I will be fishing it in the future . Initially I had intended only using the approach for nymphing but  It works well for drys to. The fly I used was a size 16 CDC quill bodied emerger that I showed a post or two back its caught me a hell of a lot of fish this season. As for the method I will be using it in the future.  That is for certain.

This weir has appeared on the blog a few times , until the other day it was as far as the sea trout can get up our little beck.  For the last few years members of the club have worked hard to get the permissions needed from all the agencies to put in a fish ladder or pass. This picture shows it in fairly high water a week ago with the steelwork in position 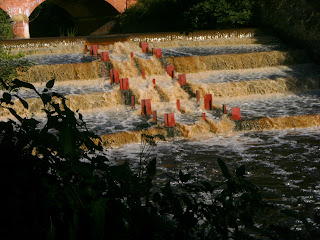 Last weekend a number of the members turned out to finish the job by getting all the wood planks in place to form the fish boxes, a good day helped by onlookers and a few cans of beer. 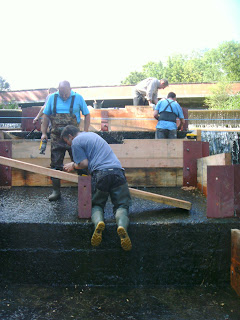 It was brilliant to see it all taking shape and lets hope that the fish are able to make suitable use of it.  Certainly the boxes should be deep enough to allow them to use the ladder. 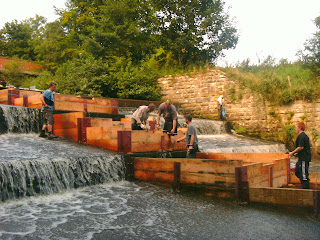 It is only a small club with limited membership but it shows what can be achieved .  Most members have helped and some have put in many hours.  Here the temporary dam was removed and the water poured down into the boxes 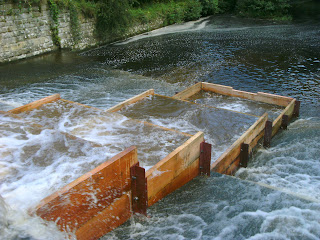 Then looking at the finished job,  The same method of construction was used in a pass on a weir downstream . That has lasted 20 years lets hope this one does as well... 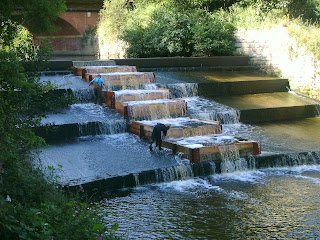 I put a pic of this on a fishing forum and a lady member said she thought it looked pretty , I have to say I think shes right.....