A couple of strangers


In the last week we have had a fair bit of rain.  Now that isn't a complaint ,   on the contrary we are in desperate need .  Rivers are on their bones and the reservoirs are revealing long abandoned villages , its been a very long dry summer.  However this Saturday despite the recent rain I went to my local river .  The view from the bridge was well.. Brown.  Yep the river was carrying a lot of colour .  But as normal I was faced with a simple dilemma , fish or go home . So in the end no real decision to be made .  I got into my waders and as I got ready a couple of dog walkers appeared .  Now I knew the walkers in question it was the VET and his wife who have looked after my Choccy Labrador for the last 11 years ,  we had a chat , mainly how he couldn't understand why I would be fly fishing in such a  swollen muddy river . Now I could have explained about the pleasure of the challenge and how it presents a different set of circumstances ,  in the end I made light of it and pointed out the alternative was watching TV, 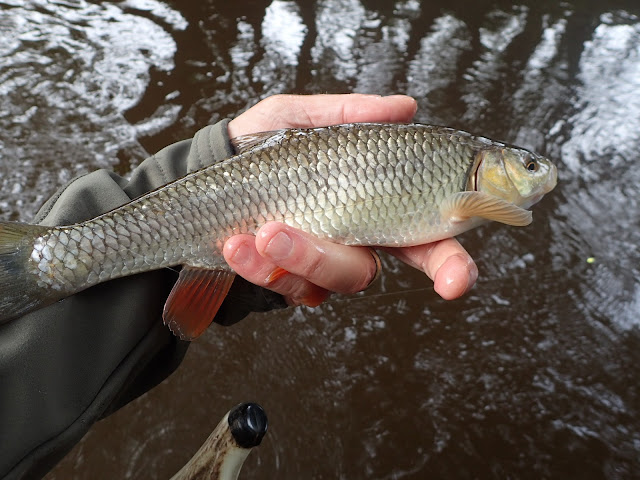 Despite looking like this I was into fish pretty quickly and the river cleared markedly in the few hours I fished ,  There was odd fish rising as it stood there and the final few fish came to a dry.   Just shows doesn't it that I could have easily turned round but poor conditions or not I still had a great few hours. 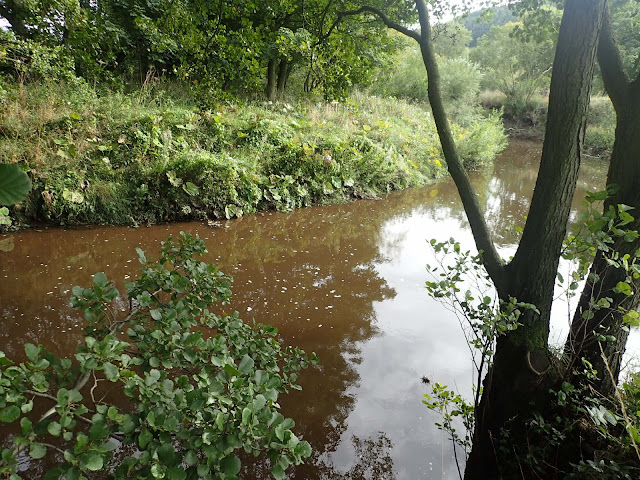 Anyway starting of downstream ,  I had Grayling on my mind ,  I guess I should make a confession in such coloured water there is a "fly" that is particularly effective .  It is and I hesitate to confess the dreaded squirmy worm in bright red , a shameful creation of soft latex and a heavy bead .  50 years ago I would have been shot by the keeper for even owning such an abomination .  Shame forbids me from putting a picture up here but if you google squirmy worm you will get the idea.  Anyway the fish above took it with confidence. 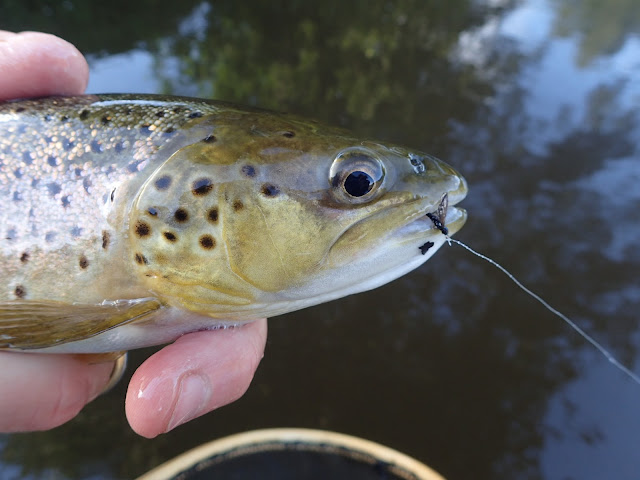 The day started well, a few small wild fish then a thumping great stocked rainbow that I lost at the net .  Probably my fault as I had to bully it hard to keep it out of the tree roots.  Then a biggish stocked brown trout that was rising to something small in a crease under some willows I was pleased with the cast it deserved a fish,  The fish that in the end was nearly the last of the day was a surprise ,  A Chub a fish that I haven't caught for a few years on this river .  Would love to see more of them,  they are a strong fish that I am pretty sure would grow bigger in the streams than the native browns ,  they even rise to the fly and watching them take a black gnat is my earliest fly fishing memory .  I have always viewed a Rainbow and brownie and a Grayling as a triple on this stream.  I guess that I will have to rethink that as a Grayling a Brown trout and a Chub .  Its going to be tough to replicate . 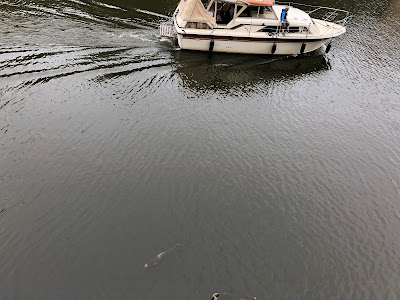 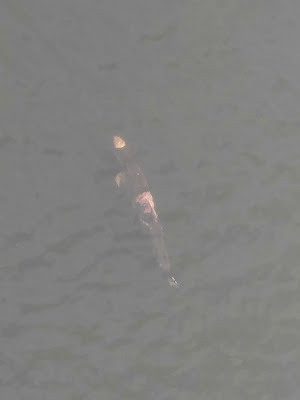 As an aside last week a colleague asked me to identify a fish that someone had photographed acting strangely in the Ouse right in the centre of York.  I was pleased to able to help but it struck me as sad that the only evidence thats visible of the runs of salmon that go up the river through the city was a diseased fish .  This one showed the unmistakable signs of UDN . Probably made worse by the low water and high water temperatures this year .  Sad that such a beautiful fish as a the bar of silver that is an Atlantic salmon can be should end up like that .  I saw a lot of this that year .   I guess this year I just haven't been on the river enough to see them.  The river that I fish for Salmon and Sea trout has remained desperately low all year.

Strange stuff falling from the sky....

I have been having a think and I reckon that its a year since I last fished in the rain and you know what,? I bloody enjoyed it . I enjoyed that feeling of rain trickling down my neck , I enjoyed the fact that there was no risers and the fish I had came to the nymph.  I enjoyed that major irritation of a raindrop getting on my hearing aid , ( other wearers will sympathise ) .   It also reminded me that doesnt the rain make a lovely plooping noise when it hits the water surface. There wasnt enough rain to do a lot of good for the shrunken streams but hopefully the showers signalled a change in the climate and we may yet get some respite from this long hot dry summer... 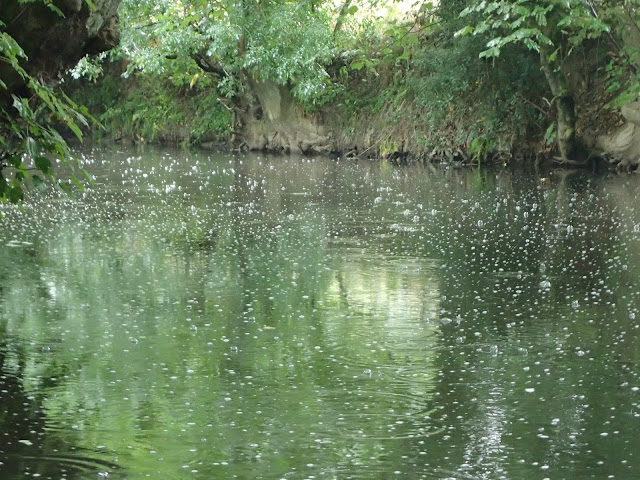 The rainy day meant i spent a little extra time just walking along the bank and checking out the stream. remember this is a new stream to me this year and the very low conditions means that those under water features are very visible right now.  The day was in many ways a welcome change I have just returned from two weeks on the Greek island of Rhodes .  Most days saw mid thirties temperatures , some days up to 40 the change is lovely , seeing some green grass and feeling a little chilled was great. Eventually we will get some proper rain and  then I will be back on this stream when it is at a winter level with Grayling in mind. 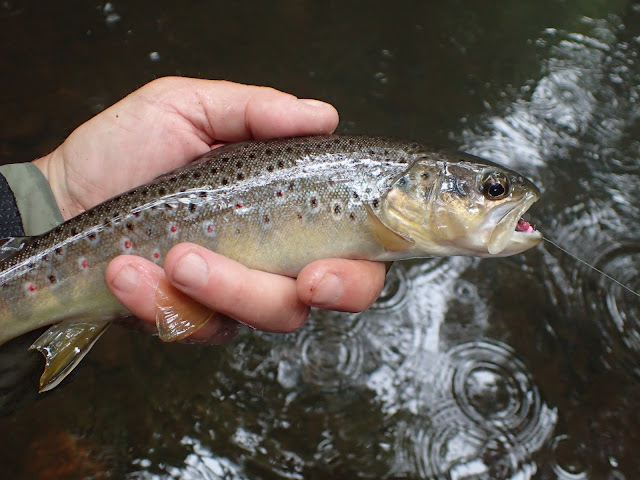 For now the trout were still up for playing .  Although I must confess that I was hoping for a Grayling when I ran a nymph down through the deep run under the trees.  The little pink bead head nymph probably gives that away .  Although the next few months signal the tail end of the trout season .  With some significant rain there is a still a chance of Sea Trout and Salmon and the cream of the Grayling fishing is still to come. Lots to look forward to. 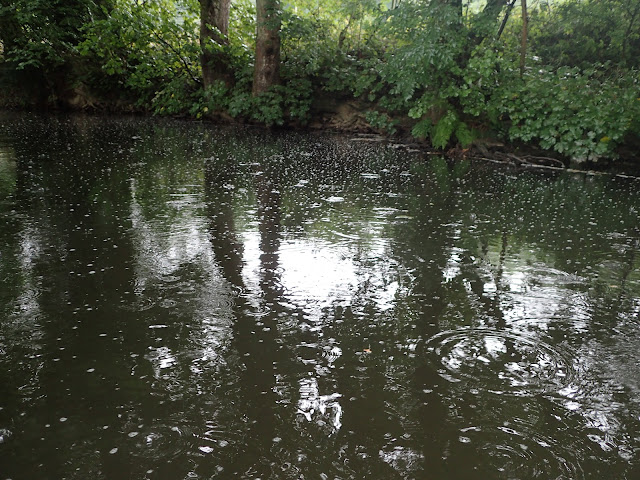