Had a short session on the Ure late afternoon.   Unusually for me didnt fish a dry once.   For two reasons . Firstly nowt was rising and secondly as I had recently invested in a days coaching on nymphing techniques with Stuart Minnekin which was the first proper fishing instruction this old goat has ever had. Furthermore I have to say I enjoyed it immensely .  I decided that I didnt need to try the dry there was another way.... 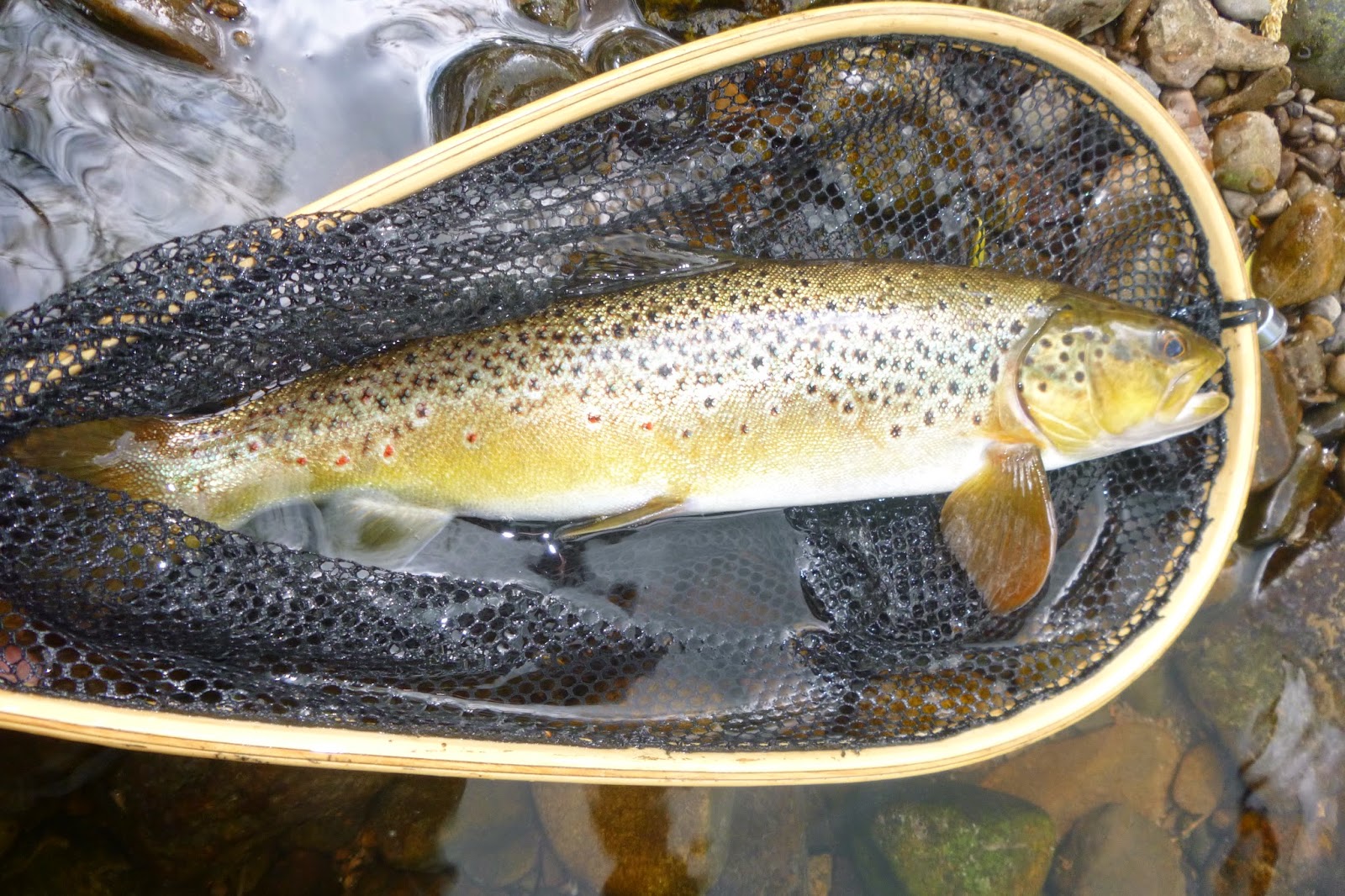 I have always known that my preoccupation with fishing dries was costing me fish but the days coaching changed my mind on one thing , that nymph fishing is more effective and a damn sight more entertaining than I had previously imagined .   Today I caught 7 or 8 brownies all on the upstream nymph . In water that I must confess would have been fished rather badly by me before .  Perhaps I fished it badly today but three and a half hours fishing yielded a decent result when the river was low , clear and with virtually no surface activity. Previously, I could chuck a nymph about and yes I even caught fish on them at times but the whole process didnt have a huge degree of commitment.  Something which is now rectified.
The day also confirmed that my casting needs a bit of smartening up.   So thats the next thing thats going to get some attention . 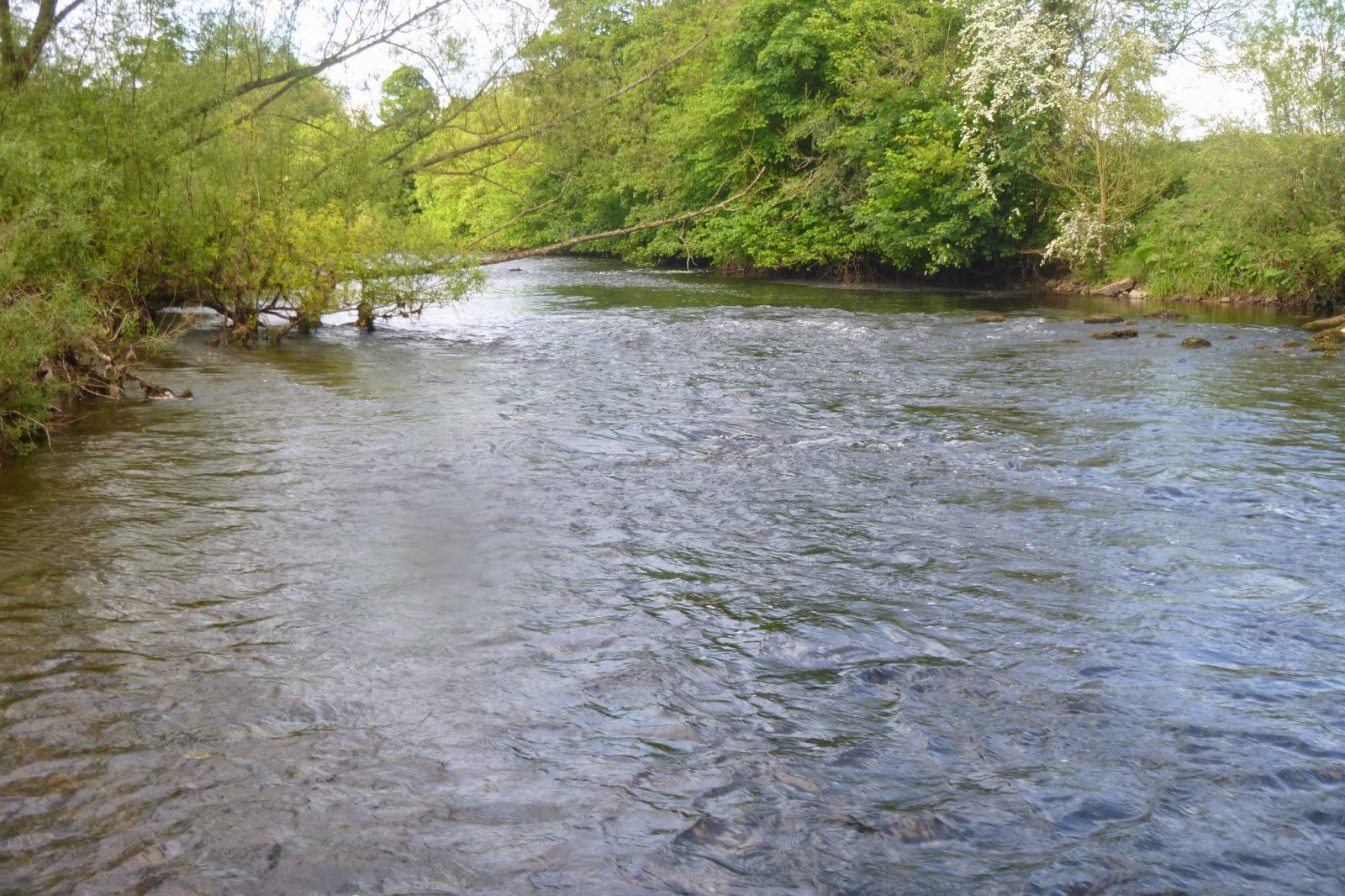 I find my self in the position these days of having access to as much good fishing as I could reasonably ever want .  I have cupboards full of gear ,  So have decided somewhat late in life its time I really go to grip with how to make the most of it all. 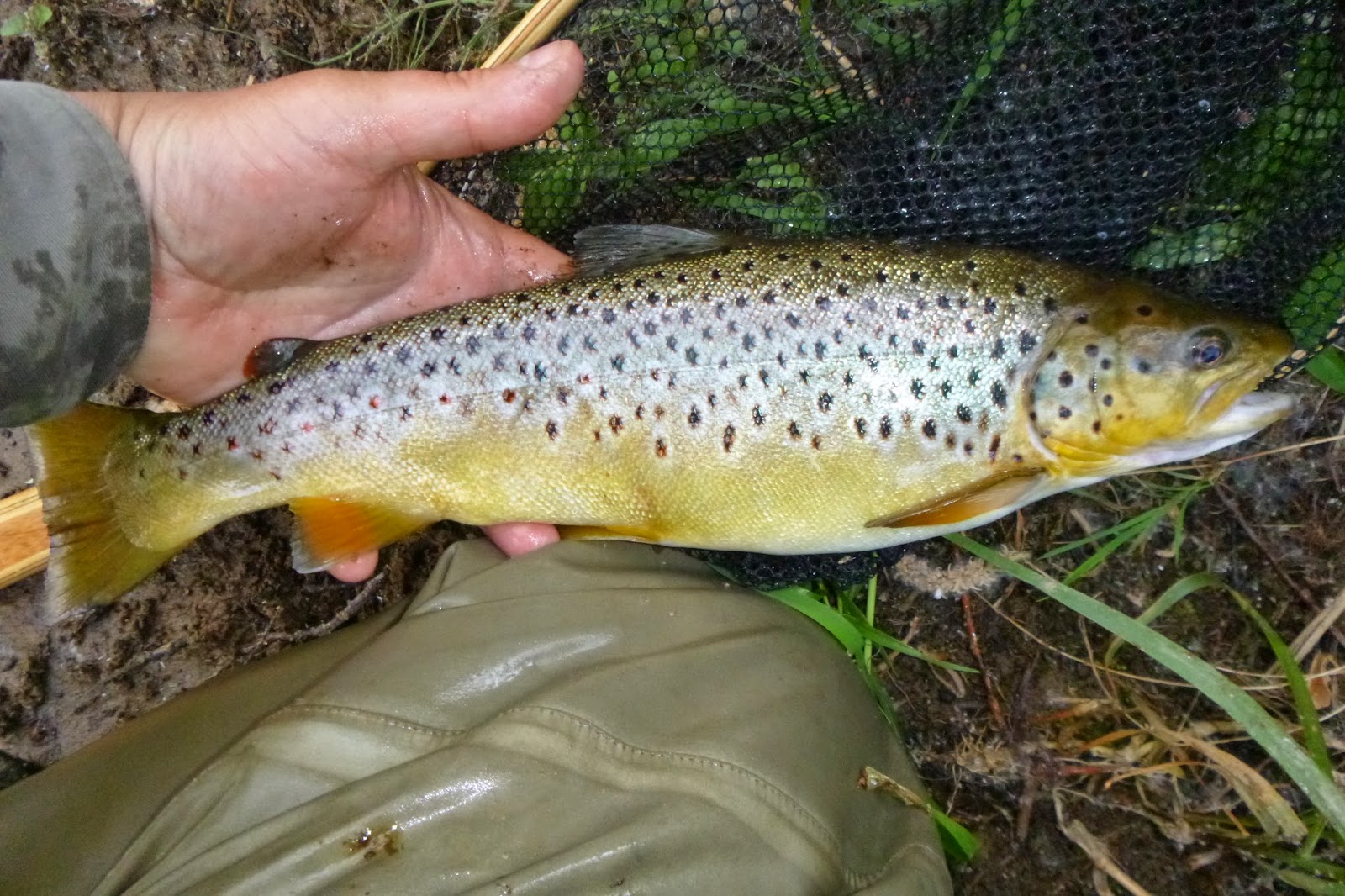 I saw only a couple of rising fish in four hours fishing . and those were only small fish splashing in the shallows. 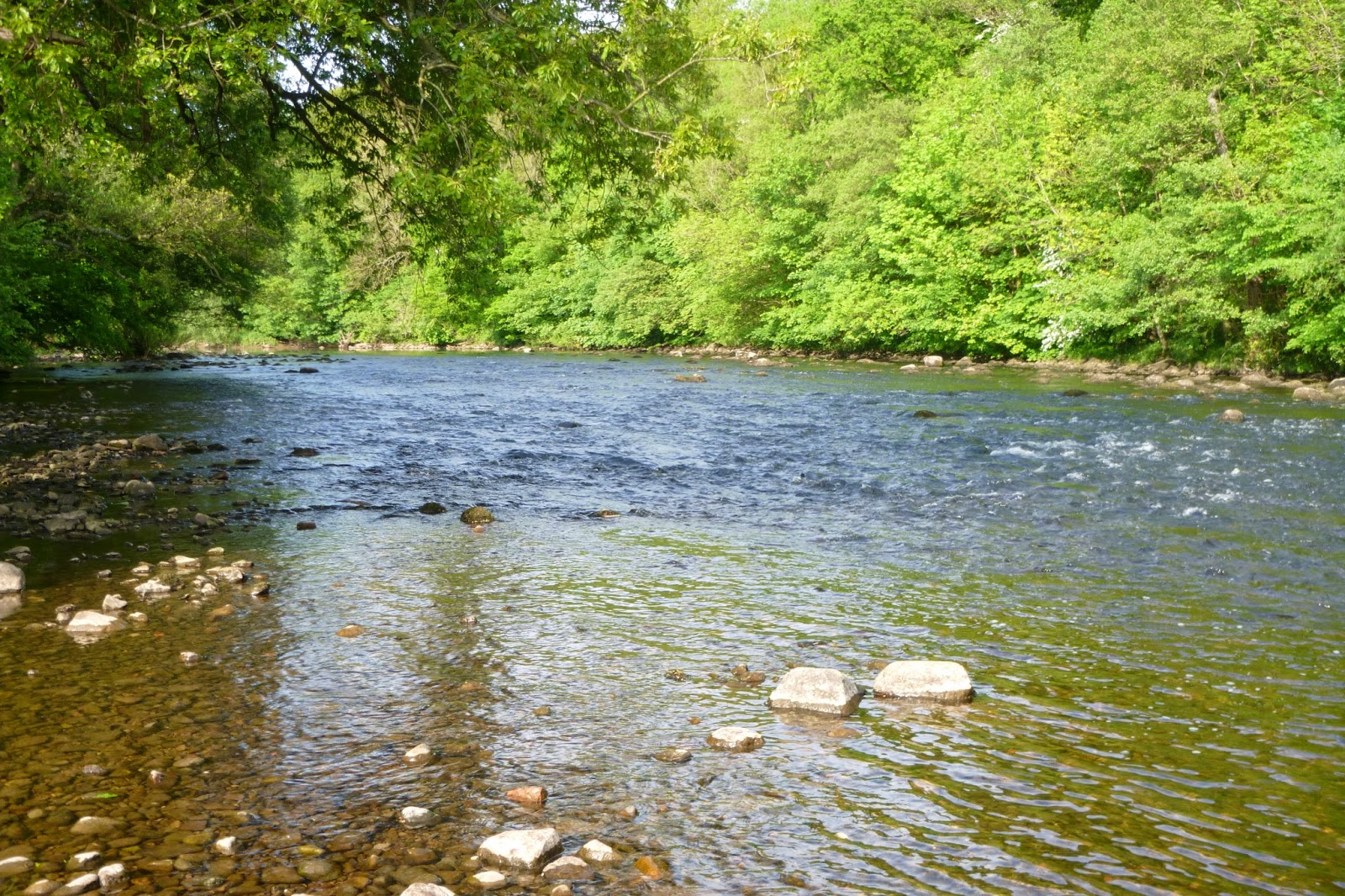 
My new playground on foston beck is a source of constant interest and like any new toy I am exploring it, checking out its potential and exploring the stretch of river which runs to several miles with several really distinct types of water..  So far I have mainly found the larger stock fish and the very small wild fish.  I decided to explore and see if I could find areas holding decent sized wild fish.  So heading of down areas which looked like having decent fish holding potential , I explored the best result of the day was below , this lovely wild fish was the best of half a dozen I found.  Just goes to show I havent been looking in the right places... 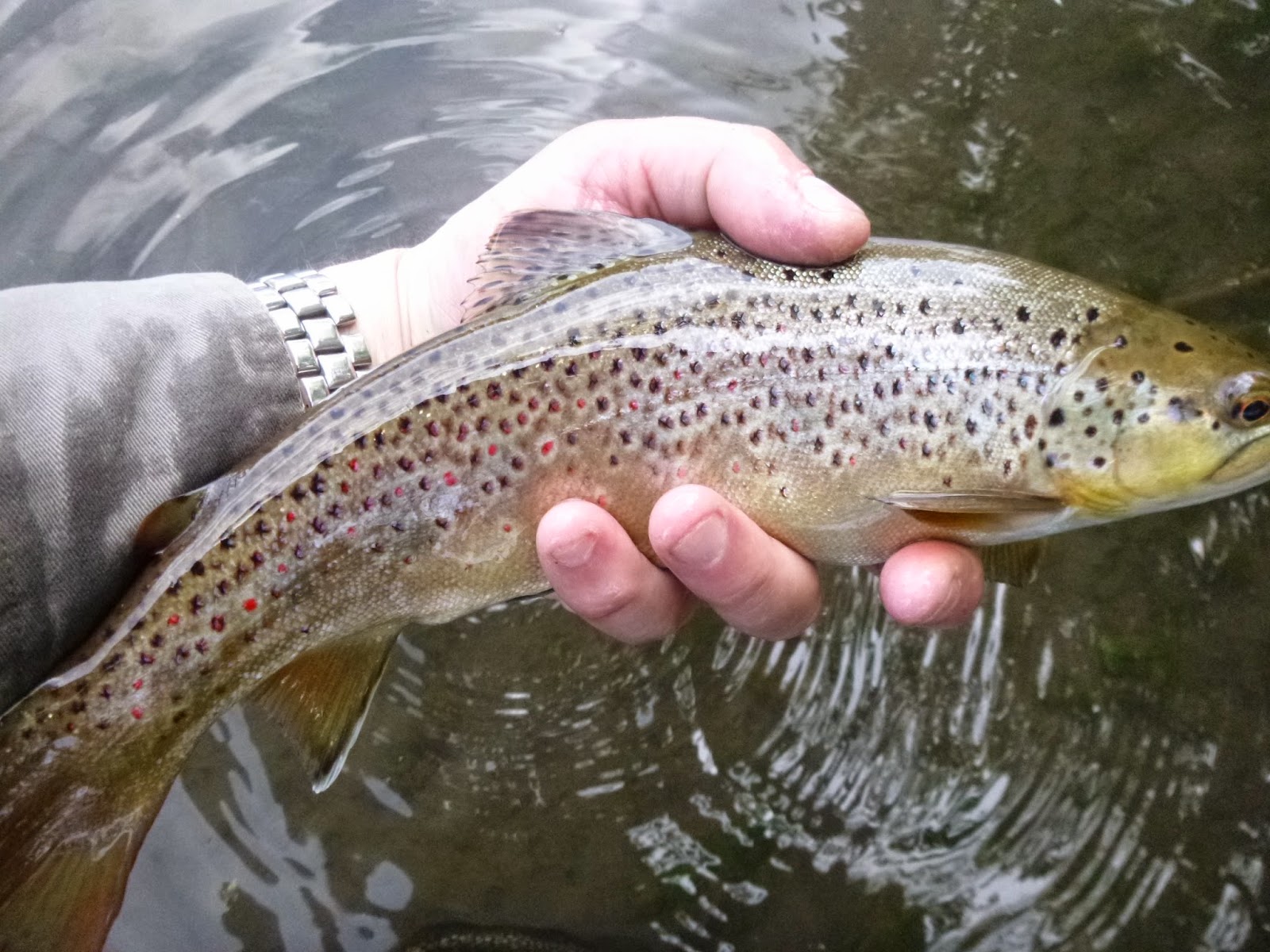 Its a lovely pretty stream with stunningly clear water and fish that have built in radar.  Especially the wildies seem to be able to see through thick hedges. 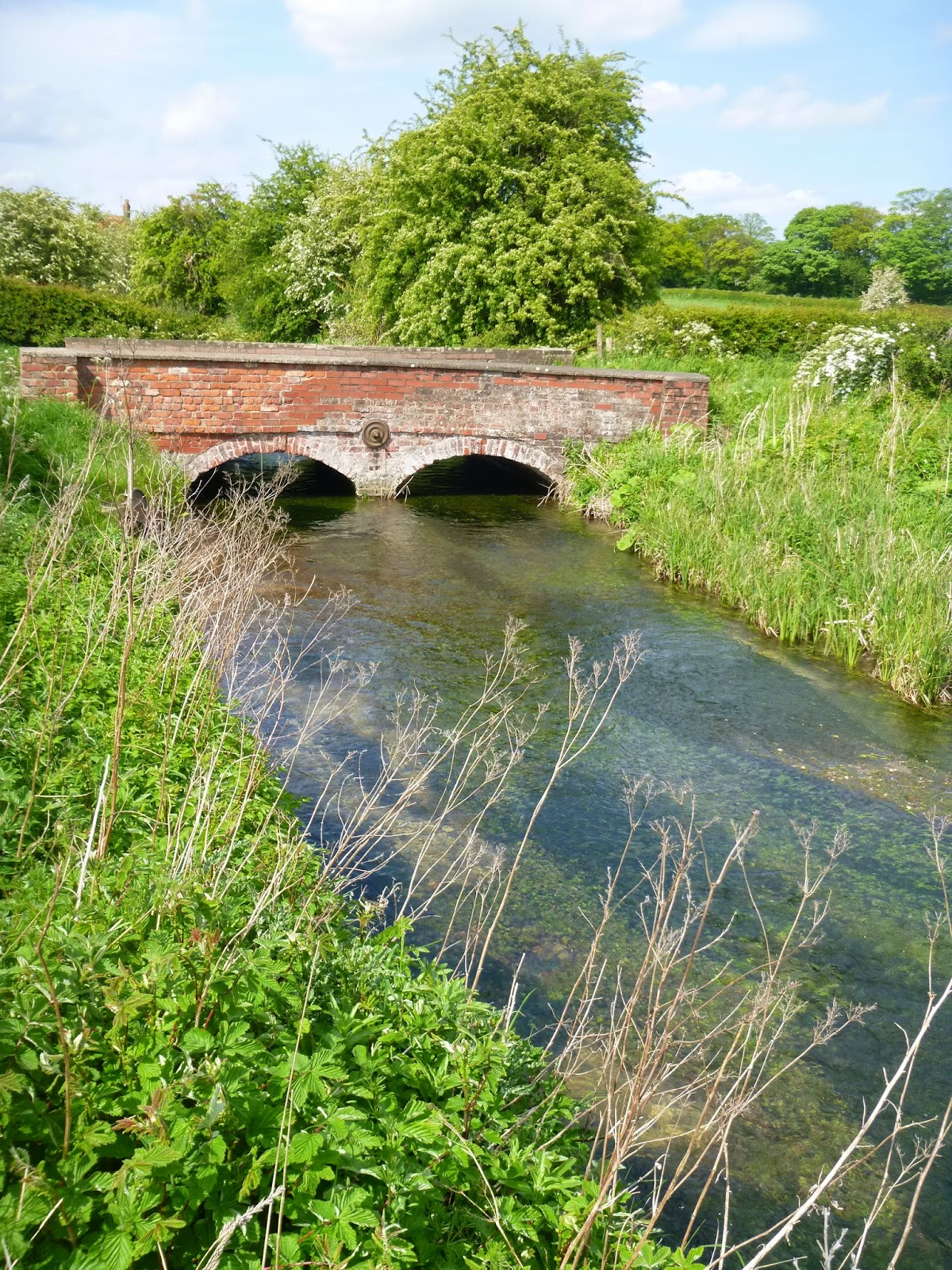 Fish spotting at distance is the name of the game the clarity is such that you have a challenge to see them before they see you... 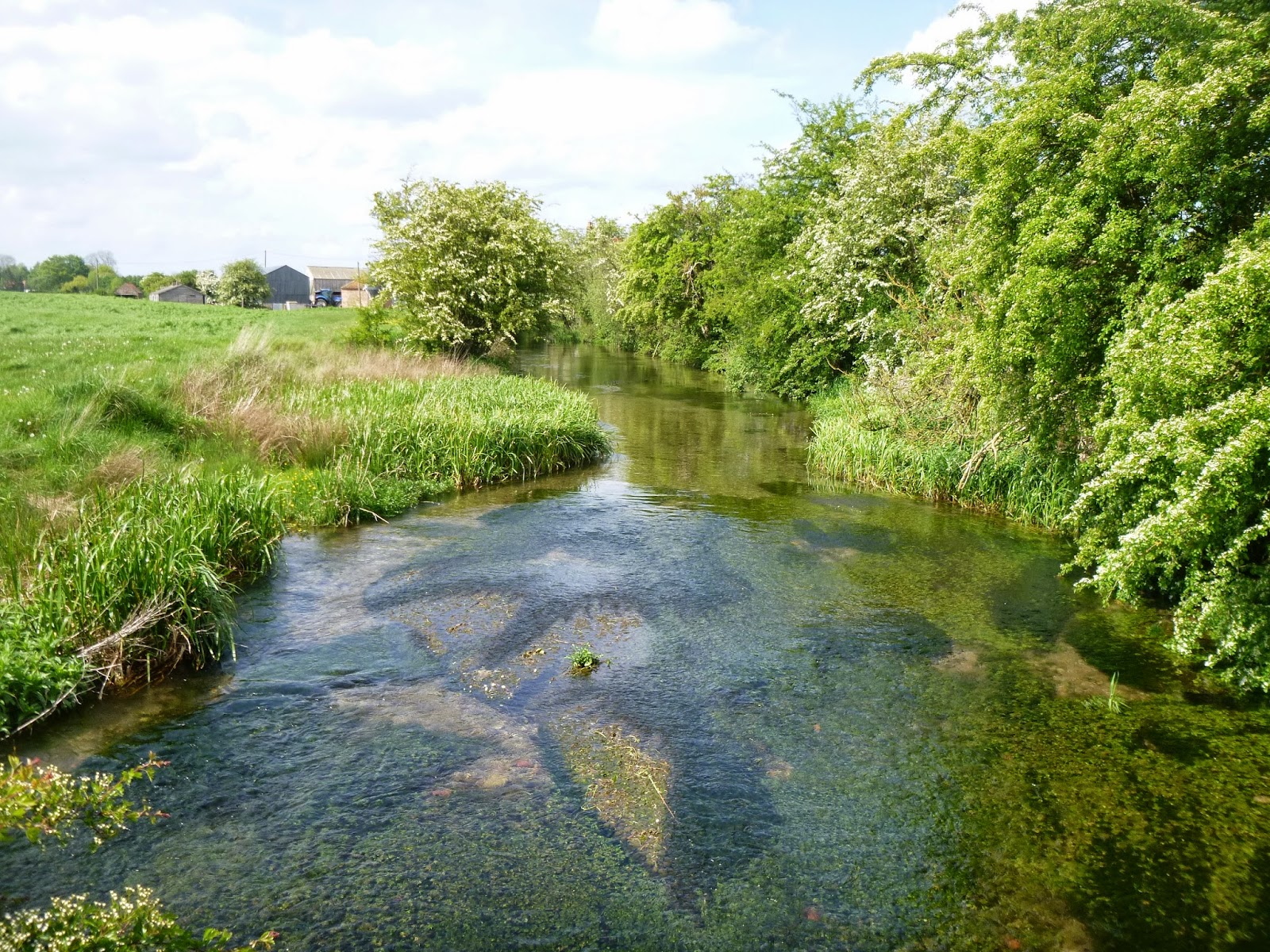 Posted by Becks and Brown Trout at 20:16 No comments:

The last few days have seen a change in the weather the cold northerly winds have eased and swung around more from the south.  The weekend offered me the chance to pay another visit to Foston beck , just about the most northerly chalk stream in the country and somewhere completely new to me this season . Both as a location and as a type of stream to fish.  The river looked pristine today although quite low.  Our north east corner of England has had a very dry winter and the ground water levels are low.  The constant SW weather stream which brought chaos and flooding to much of the UK meant this little corner has ended up with the opposite problem of  little rain. 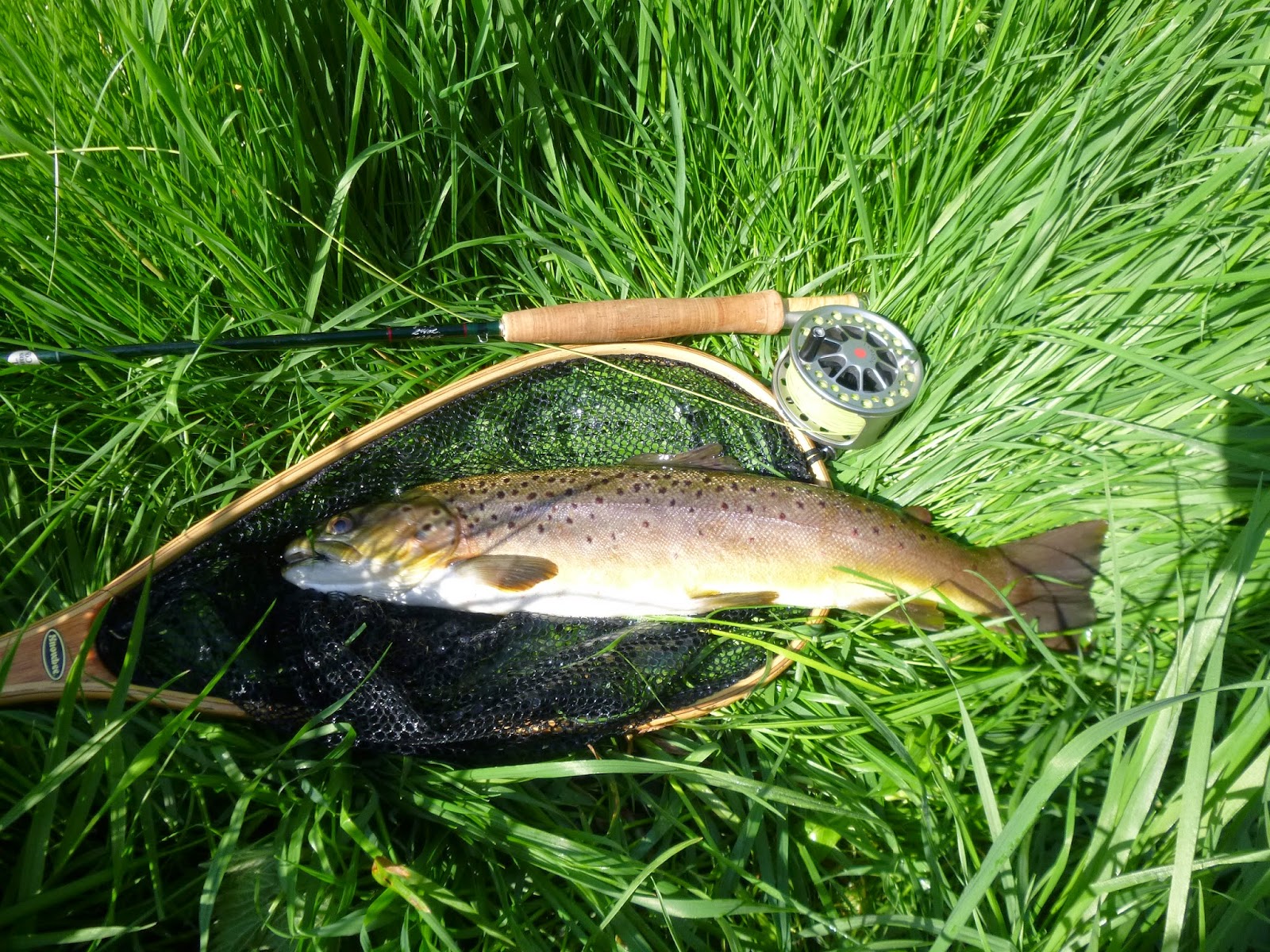 On arrival  I was pleased to see large numbers of hawthorn flies and good numbers of Olives . Hopefully the fish would be looking up at them, as it was the first rising fish I saw ended up first cast in the net ,  This whilst starting the day on a high probably reduced my overall catch by a good number as the next hour saw a lot of fish swirling at the fly or even just showing no interest at all.  After a while this ageing brain creaked into life  and helped by the extraordinary clarity of the river I could study the trouts reaction and clearly the fish were being spooked by my usual leader setup .  A drop down in size on the tippet and at the same time an extra couple of foot combined with careful degreasing brought better results. Although been able to see a trout lift from the stream bed a metre down and head towards the fly resulted in too many flies been snatched away from the fish.

All the fish taken today were taken on a hawthorn pattern as although there was Olives and gnats and even the odd sedge the hawthorns were the fly that was moving the fish. I like to tie my hawthorns on a size 16 emerger hook with a built up body of thread behind the legs and hackles . I think this encourages the fly to sit in the surface film rather than to float on it.  perhaps only a small difference to many patterns you see but I have a lot of faith in tying the fly like this .  Also the size I often see patterns quoted as using sizes 14 and even 12 . The hawthorns must be a hell of a lot bigger in other parts of the country but around here I find a size 16 is about right. It certainly worked today.  Apologies for my scruffy tying . 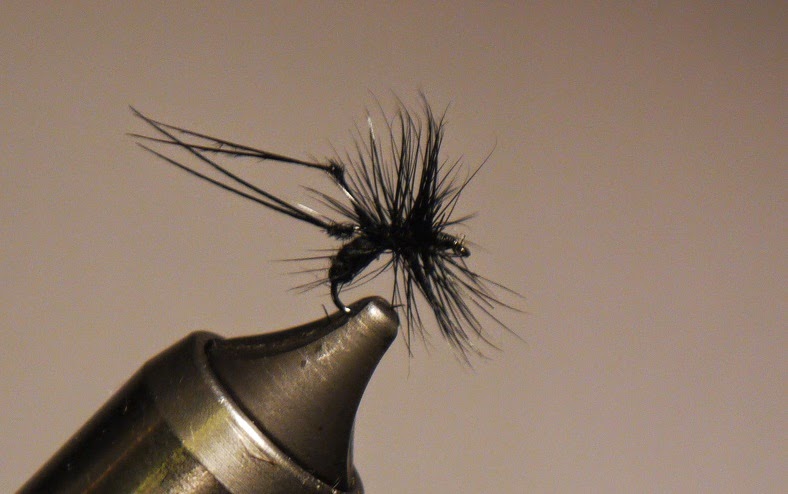 Exact counting isnt really something i do but I ended the day with between 12 and 15 fish. The best fish would have been just over 2 lb.  have to confess I put down one that was much bigger and lost a good fish in the weed beds .  But otherwise a brilliant day and a real lesson too. Being able to watch the trouts reaction with such clarity is a real change and so different to the spate streams I have fished for the last 40 years . 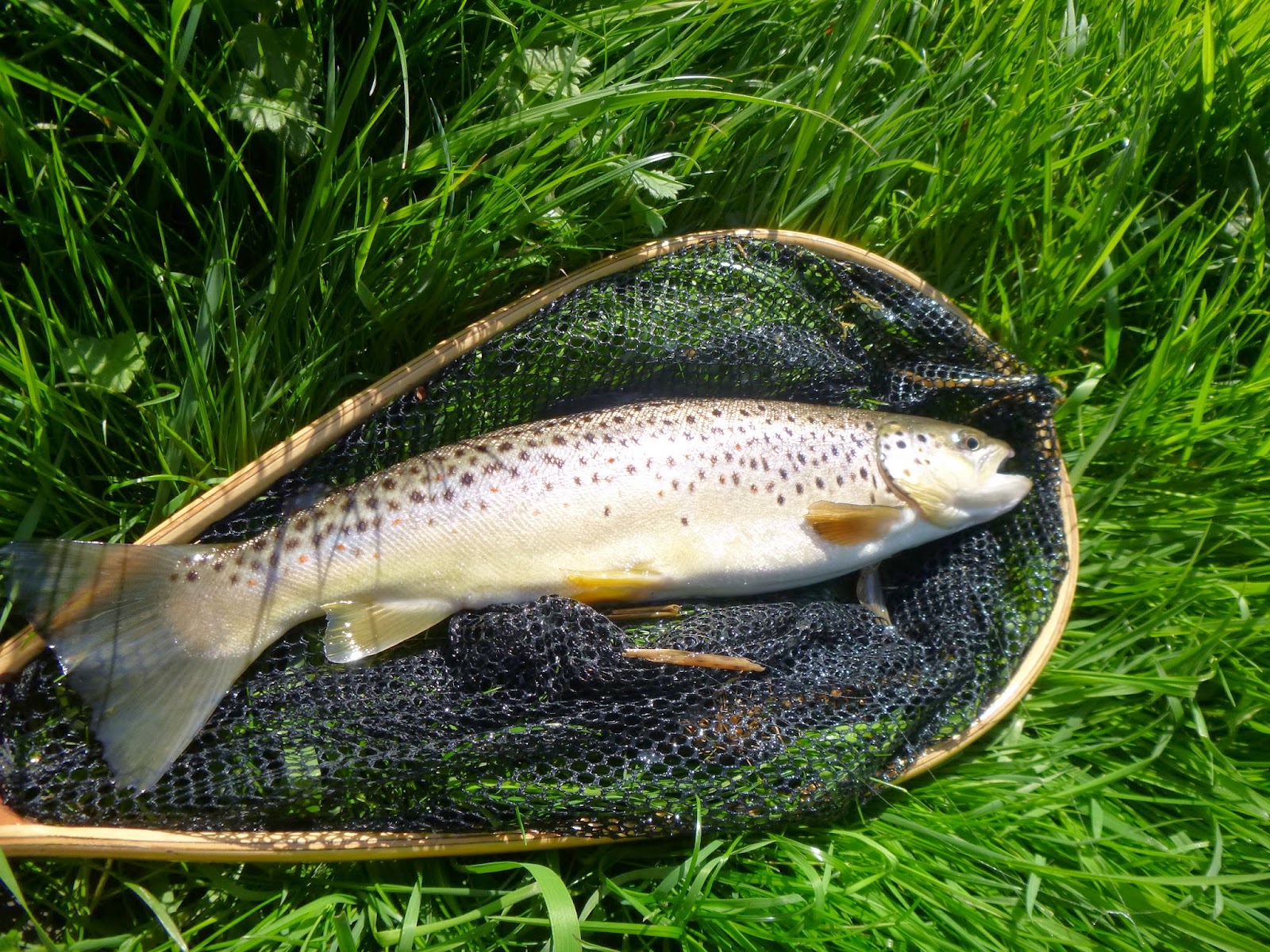