So that’s it then

So another trout season ends ,   I reckon that was my 51st,  Not I might add my 51st fishing season but it is the number since I picked up my first fly rod.  Hard to imagine how much time I have spent planning , dreaming and actually fishing for trout since I caught the first one . I can still remember that first fish, I can recall that moment of disbelief of fooling  that rising fish as if it was yesterday.  When I lift into a rising fish still gives me the same buzz now . 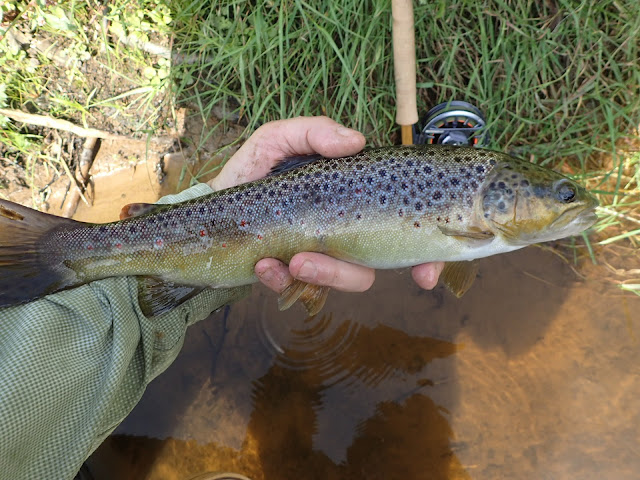 This lovely small stream brownie was my last of the season and the only one of the day , I think partly because i actually wanted it to be that way. I switched to targeting the grayling straight away.

There were no large grayling today ,  I was briefly connected to one better fish but an underwater snag allowed it shed the barbless fly 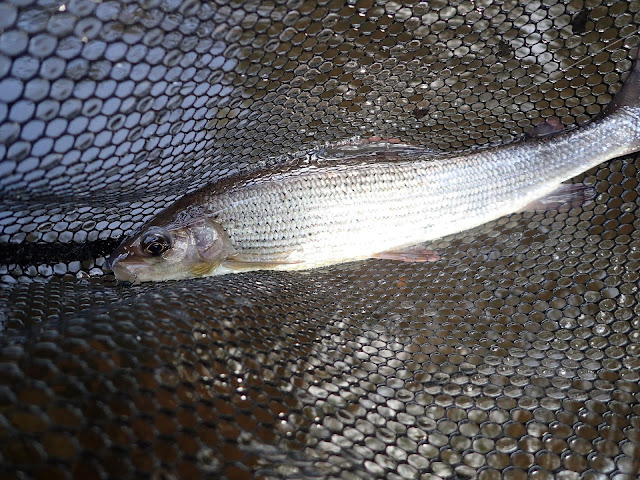 In one run there are always Grayling and felt sure that I would get some interest from a fish from a well presented dry.  After a fruitless 10 minutes I switched to a nymph .  The result was four fish in six casts the first two in consecutive casts .  They were clearly feeding hard but not looking up. Despite the water been at best 2ft deep and running very clear . 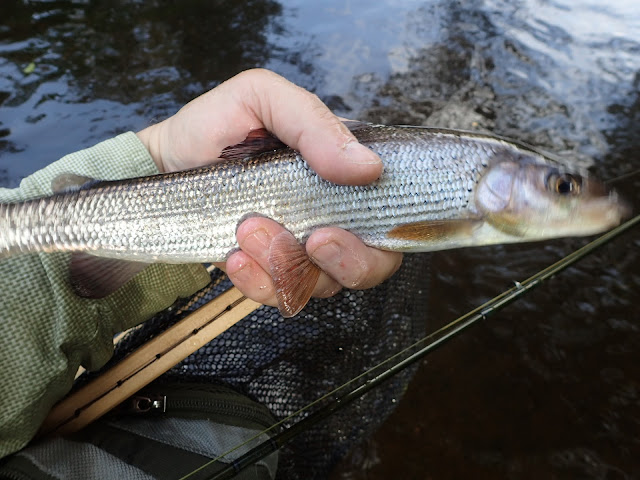 I have never been a great fan of newer Sage fly rods.  Always seemed to fast for my style of fishing ,  However last year I picked up a Sage Circa 379 on a well known auction site ,  For small streams it has been a whirlwind romance .  This is a 279 sister for it.  perfect for these smaller streams .  I paid a bit more than I would have liked for it on the same site but so far I have fished it 3 or 4 times and am mightily impressed.  When I think back to my first fly rod , an ABU fibreglass job and compare the performance to this lightweight creation it does make you realise that sometimes progress is a good thing.. 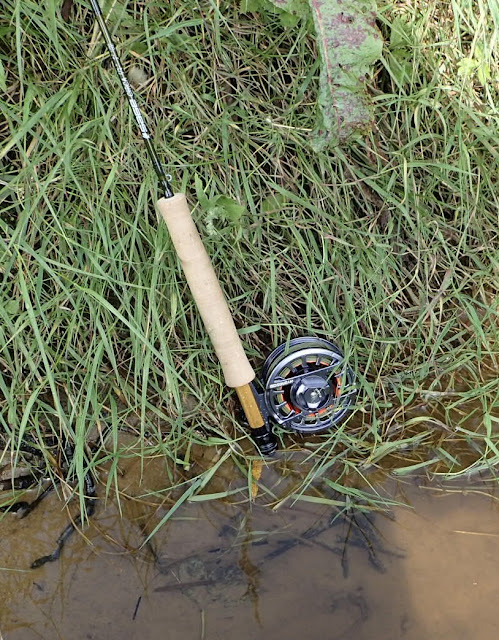 This small river is very narrow and tends to retain a healthy flow even in the driest of years ,  it is very intimate fishing .  I learnt a week or so ago that the EA have been to walk the river.  To be fair in places there are some huge trees blocking it and causing massive erosion problems . It sounds as though they will be along in the winter with heavy machines. lets just hope they dont do to good a job .  As we may suffer a few years of leaner pickings while the river recovers.  About ten year ago they cleared out some obstructions and the fishing wasnt great for a year or so.  Proof that as my friend Dave says trout live in trees. 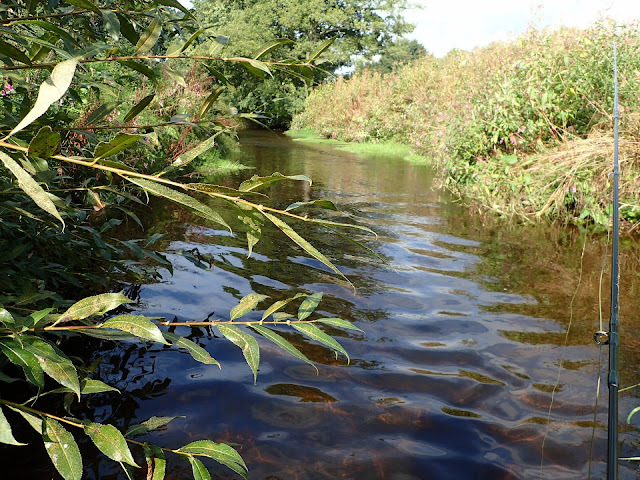 The grayling generally seem to be thriving here ,  The head of grayling seems to exceed the trout ,  must say that this one seems well fed 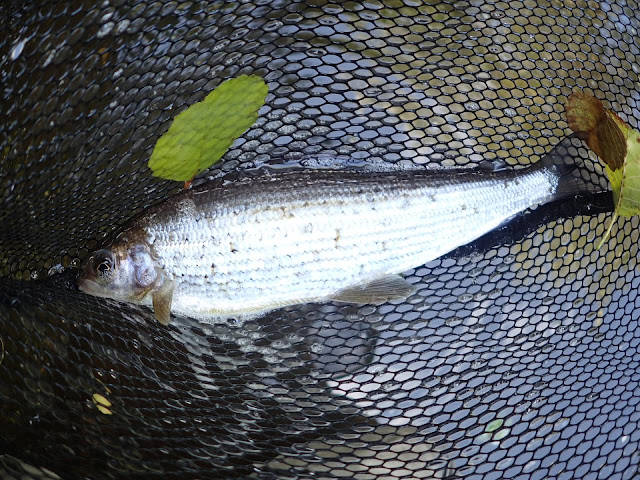 On the way back home I passed a couple of service stations with long lines of cars waiting to fill up . For the benefit of the foreign readers  Panic buying has broken out due a newspaper reporting that BP had a problem with tanker drivers , The result panic buying creating a shortage ,  There is plenty of fuel but if everyone fills up at the same time a shortage becomes another self fulfilling prophecy .  But there again people have a habit of making the same mistakes ,  Whilst I was fishing today I spotted this sheep totally tangled in the fencing , so wandered up to the farmhouse to let the farmer know..  Interestingly my son made the same journey last week as there was a sheep caught in the same fence.  the farmer reckoned it was the same sheep.  I guess people and sheep have things in common. 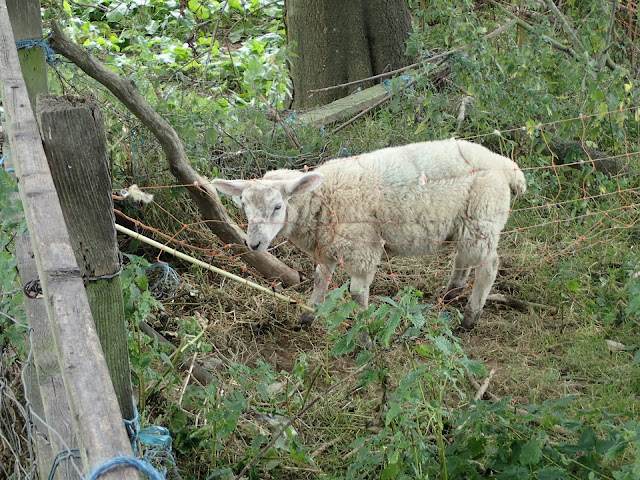 I think i only made half a dozen overhead casts today . its mainly roll, spey and general make it up as you go along casts are the order of the day , With a few bow and arrow casts thrown in. I love that about the river so much interest . With many a surprise along the way , 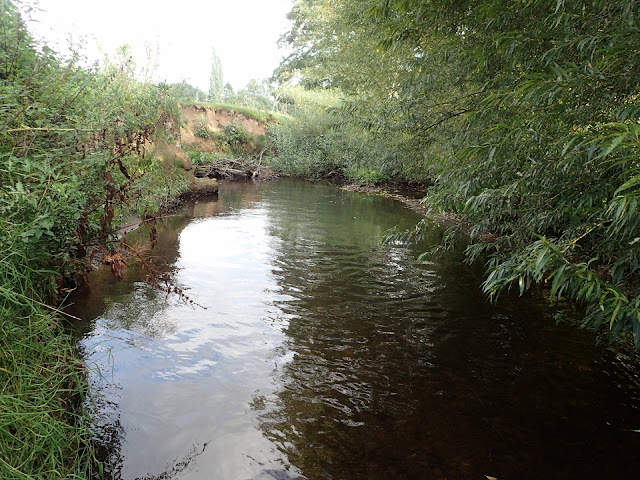 Anyway heres to the Autumn and Winter grayling fishing , Hoping that I catch a few a bit bigger than little chap.  If the rain that is forecast next week arrives we may even get some sea trout up one of my other  local streams. 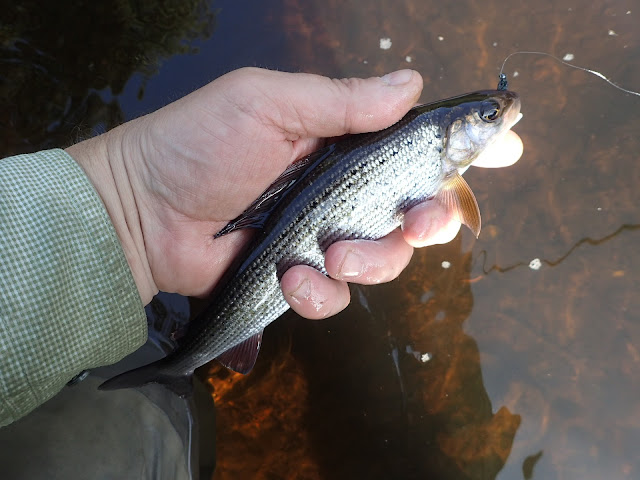 Just as a postscript.  Hippo from Angola left a comment on the last blog post .  Comments like that remind me that there are a number of folks scattered around the globe who read this . It reminds me just how fortunate I am .  The mine clearance work is amazing Tom..
Posted by Becks and Brown Trout at 11:57 2 comments: