taking a month or two break....

In the last few months I have become increasingly disinterested in all things online.

A lack of inspiration a lack of fishing the steady creeping misery of winter have all contributed.  Anyway stay tuned I will be back in a month nor two..I just am taking a break.

Strange month this.  A colder more dispiriting month is hard to imagine.  But yet its one that I eagerly await.  The first week of Feb is the time when the lengthening days really become apparent , Winter in the main is behind now and the new seasons approach is becoming tangible.  The Subscription reminders and AGM notices have arrived for the clubs and Syndicate I belong to offering yet another reminder of what lies ahead. 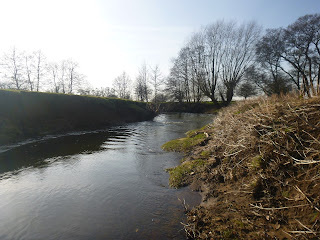 The lengthening days lift my spirits and those first few precious days when the spring sunshine arrives are a taster for the approach of spring.  This Sunday was such a day and I escaped to the local stream to see if the Grayling were in the mood.  In the event they didnt want to join the fun but given the state of the river levels recently I was not surprised. Water levels have been up and down like the proverbial.   The banks have taken a real beating and there has been many collapses .  As I left the river I noticed these snowdrops clinging on by their fingertips.  The next decent flood will have them relocated. 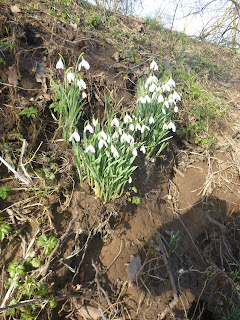 It was nice to cast a fly though I even saw a rise or two and proceeded to waste a ridiculous amount of time on that fish.  It was good therapy though and went some way to lift the veil of winter.  The day was about looking forwards and looking over the river, fishing was an excuse, a reason to tramp along the bank turning the odd rock and checking the bank side footprints to separate the otter prints from the farm collie.  It was a day to look at the river and marvel that the barren water in front of me can be filled with the dimples of rising fish in a few short months.


The season isnt that far away now and I for one cant wait.
Posted by Becks and Brown Trout at 21:13 No comments: