A beautiful summer evening and its cold outside

The river is in beautiful condition the flow is gentle but the surface is alive with the rises splashes and dimples of the minnows, dace and tiny trout.
At the head of the pools and in the broken water the larger fish are holding station,  Across under the willow a large fish is rising he  is taking his time ( all large fish are he) The waters surface is alive with flies. Olives ,  Sedges and all manner of terrestials are there he doesnt need to rush.  Anything that needs him to move more than a couple of inches of line is ignored. 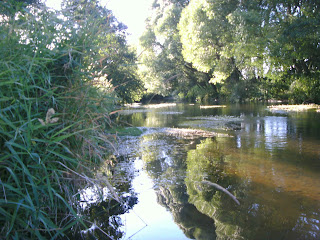 As I moved upstream wading gently and keeping the banks of weed between me and him . I was careful to take note of any fish between the banks of weed or tucked in under the bank. A spooked fish would shoot of upstream and scatter everything.  The river is shallow here at most a couple of feet but the clear water can give both the angler and the fish an edge it just depends who is the most careful.  The fly was selected,
I am a fan of the traditional patterns, a greenwells a size 16 just dressed with a hackle, no wing.  What with my bad tying and the leader twisting effect I leave winged patterns alone.  Casting is a gentle affair a gentle side cast with a roll start to lift of.  The first cast is perfect the fly touches down 2 ft above him the leader carrying enough slack to avoid any drag.  As the fly drifts over him I sense the quivering fin and he rises and sips in the greenwells. I tighten into him the rod bends as he gets his head down he turns to dive for cover but of course I am prepared side strain and a low rod tip force him back.  he darts back and forth between the weedbeds but each time I am ahead of him . After a few minutes he is beaten and I beach him . A few moments admiration and he is released. 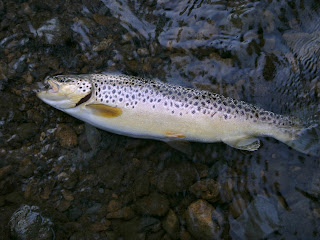 As I work my way upstream several fish are taken.  My casting is the best its been for months . I am picking the right flies and everything is working as it should.  If only every visit worked as well.  The fly keeps floating and the tippet keeps sinking.  Its wonderful when everything comes together .  I love this river it offers a wonderful mix of long streamy glides and hidden corners . But the cream of it is the bridge pool, when approached from downstream this pool is hidden until you are almost upon it high banks and trees hide it from prying eyes.Tonight the evening sun was framed in the centre arch.  The tail of the pool was alive with rising fish but the fish here are the most difficult an upstream cast to the fish means that drag from the faster  water sets in almost instantly and wading upstream to keep your line of the water is a dangerous game .  The only way is to skirt the pool to the right there is room behind and above for a short backcast

I am tucked in under the bank the cast is an improvised spey sort of a thing.  False casting on these little streams is kept to a minimum the clear and shallow glides mean the fish dont miss much.  But tonight my casting is perfect. a roll and a single back cast with a bit of a haul and the line clears the high bank behind me, The forward cast stabs out and the quick check puts some slack onto the water.  A short drift over the small group of fish and a rise and take ,The group of fish scatter as the hook takes hold fish tear of in every direction.  The little bow waves marking their track like a pod of torpedos.  A short struggle and a lovely little wildy comes to hand , After exhanging looks we part company . 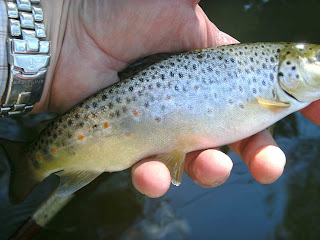 I take my leave of the river and retreat to the side of the pool ,  a seat is placed there and I enjoy a well earned pipe , a perfect end to a perfect day.  As I gaze out over the pool reality returns and I stare into the log fire the dog is sat looking at me and I wake from the day dream.  Outside the hail batters against the doors the wind shakes the windows and the reality of another Autumn evening  returns , I hope that next year my angling skills match my dreaming.

Email ThisBlogThis!Share to TwitterShare to FacebookShare to Pinterest
Labels: memories

The Compleat Angler , More than just a book?

I love old Angling books , I have several bookcases devoted to them with some wonderful titles by distinguished authors, but one title stands above them all though.  The compleat angler is a wonderful title its a book that is surely unique among angling titles in the style of its writing and the historical period in which it is placed
﻿ 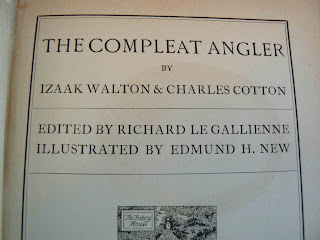 There cant be many people , anglers and non anglers alike who haven’t heard of the title . It’s an incredible book a title that’s many 100s of years old and known about by millions, and yet I would suggest very few people have actually read the book fully. Also It’s a title that all non anglers assume every angler owns and has read. It has almost become a book symbolic to the sport and with over 500 separate editions its one that can not be considered rare.
When you read the book it becomes apparent that the author was a real angler the descriptions of the fish and their habits is accurate and in some ways differs little from the standard stuff regurgitated time and time again in modern magazines and books. You cant help thinking that if you brought old Izaac here he would soon be catching with the best of them.
I have several copies of the work, some fine and collectable some that were given as gifts and yet one alone draws me back to it time and time again. It’s a very average copy but what makes it stand out for me is the connection that exists within it to the owners in the past . This book was given as a gift back in the 1920s to a man of the cloth no less and over the following few years the owner appears to have collected contemporary newspaper cuttings and articles regarding Walton and the compleat angler. 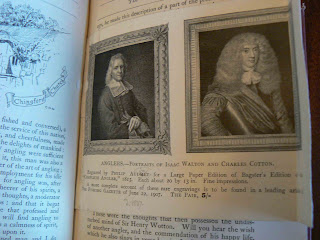 The inscription inside the cover demonstrates a few things to me , namely people 90 years ago wrote with a finer hand  than they can today and also that books were valued more highly then than now. 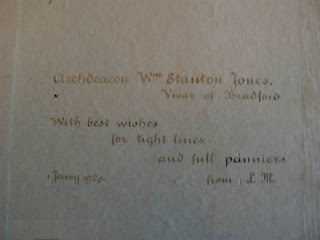 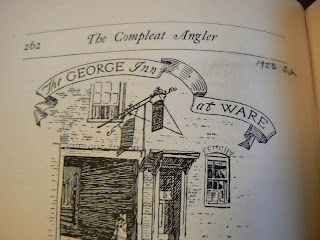 Throughout the book there are countless notes and references and  dates on specific pages which would suggest that the book was also used as a reference by the owner to revisit the places that are described in the title. I read these notes and I feel that there is a connection not only between me the reader and the author but also with the previous owner. Now I wonder how many contemporary titles will have the same effect on those that own the book.  How many modern titles will inspire owners and readers to follow the owners footsteps after many hundred years?. 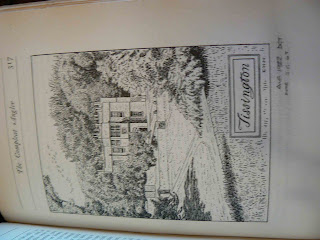 His love of the title was obviousley no secret as the card below appears to have been sent to him by a nephew , that is judging by the cards inscription. 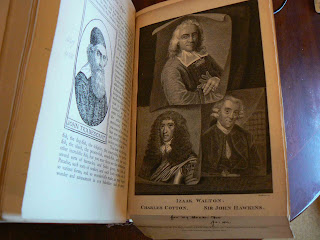 As for Izaak himself I wonder what thought went through his head when he decided to write the book there was no format to be followed , few other titles to compare or mimic just a a wish to set down the knowledge that was there.  personally I love the style of the book, The journey that the author takes you on and the discussion between the two main characters .  Perhaps it is that journey that inspired the former owner to retrace some of his steps. 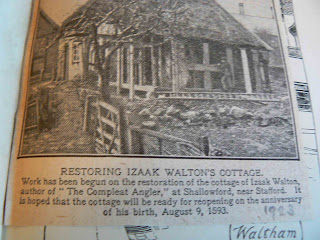 I feel that as the custodian of this title I should add to its history. So this year I shall be hunting out a couple of the places referred to and illustrated in the book and adding a new note to that effect. Sadly my writing will not be as good as the inscription and modern day newspaper cuttings in the Times regarding the state of Waltons cottage are rare now but I feel that as long as my additions are in the spirit of the previous owners the the additions will be worthwhile…

Email ThisBlogThis!Share to TwitterShare to FacebookShare to Pinterest
Labels: Literature

Saturday on a Yorkshire Beck looking for Grayling

Saturday morning was spent in the office. The demands of the job make such times a necessary evil. However this presented an opportunity to have a couple of hours Grayling fishing on the way home. Several of the waters I fish are strategically placed along my commuting route this allows me to maximise lifes fishing opportunities. I had intended a trip to the Ure but the prospect of the tortuous route home due to road works and diversions made me change my mind ,

The little beck I headed to was accessible and unlikely to be out of sorts due to the recent rain. Arriving at the layby the presence of a car I knew meant that at least one or two were fishing the stretch. A quick phone call to the owner confirmed his position on the river. So I knew where to head .

The beck was a little up above summer levels and looked better for it . The rocks had been scoured of the algae and the water had that nice clean sparkling quality like the water had been freshly made. The low water of summer seems to lack that vibrancy and sometimes seems to even have an oily quality. The trees are starting to wear their summer livery now the golds and russets are taking over from the greens of summer. Those colours are one of the very few things I like about this time of year.
Anyway into the river for the first time this year wearing neoprene waders to combat the autumn chill. A size 14 klinkhammer ( I use this fly to much in the Autumn but I have such confidence in it) it was cast into every likely run as I worked my way upstream. I love this type of fishing, casting to where fish should be instead of to rising fish tests your belief in your own judgement and of your fly. As usual the first rise took me by surprise and the fly was in the air again on the backcast before my brain awoke to the rise. 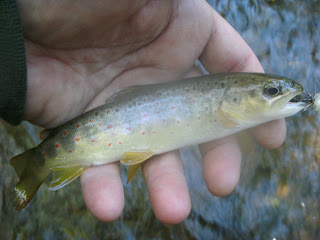 Sharpened now the next rise brought a small wild brown to hand . It came jumping about like a possessed rainbow trout a small fish that looked several sizes to small for the big klinkhammer, I continued up the river exploring the rapids and pools I took a couple of decent stocky browns from the deeper holes but no Grayling seemed to want to show their face. I missed lots of rises it seemed that a smaller fly didn’t raise the fish but a larger one did but made them a lot harder to hit. Eventually one very small grayling gave itself up it was in barely 12 inches of fast water.

I will fish with bugs into deep pools but I am amazed every winter as to how long the ladies keep rising in the faster water. The afternoon lasted maybe three hours of fishing, no large fish , not even any medium fish but the pleasure of been outside in the autumn sunshine made the day a treat.
Posted by Becks and Brown Trout at 22:09 1 comment: