This will shift em of the beach...

There is something about July that's wasted on me. Everyone else seems to love it. I look out of my office window I see people playing on the beach , I go out for a lunchtime sarnie and cant walk on the pavement because of the smiling holiday makers . Me I hate the crowds. I guess having an office with a sea view in a tourist town is asking for trouble but in February with a big North sea storm running the view is pretty special.  But at the moment the only place I can get parked is in the office car park and when I do the Herring gulls shit on it with stuff  like avian paint stripper. 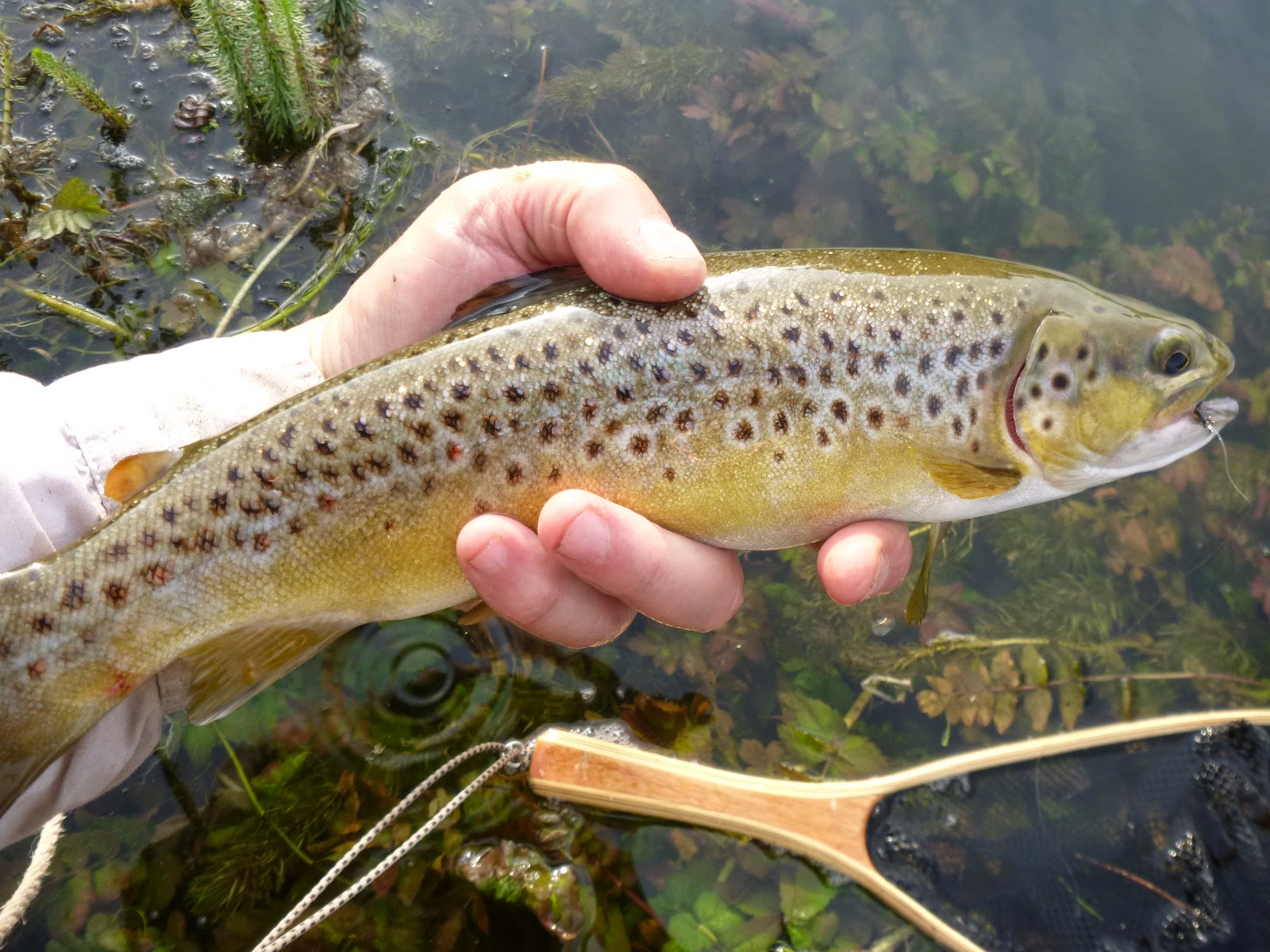 As for the weather its to hot and dry, the rivers are to low and the roads are to crowded.  I guess theres two possibilities , the first is that I am just a misery the second is I don't like hot weather.  the reality ?  a combination of both.   Meanwhile here in a July heatwave the only place I feel comfy is when I am stood in a river. 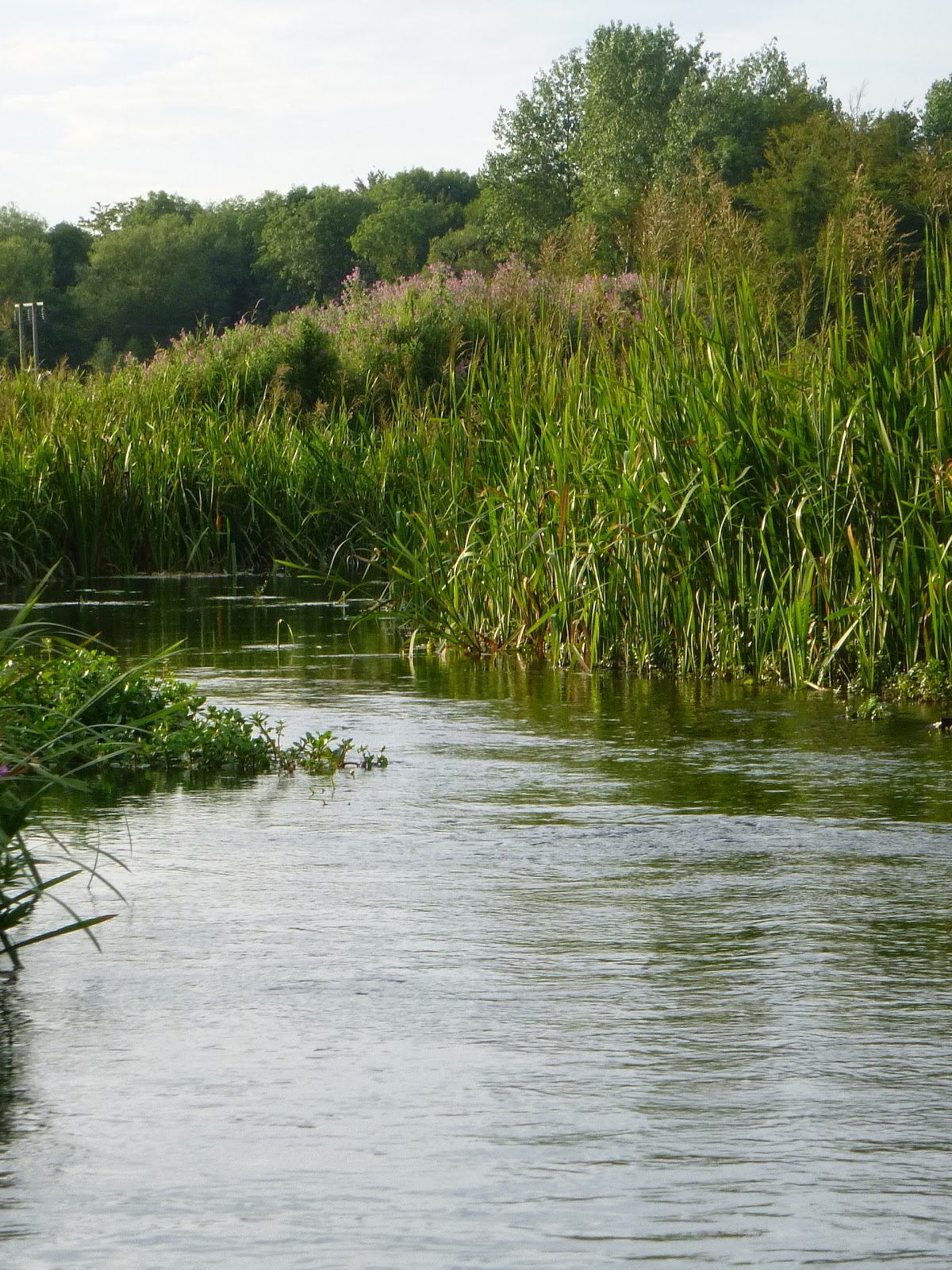 The first two weeks of July were pretty quiet fishing wise , too much work and to little time meant office time went up and fishing time disappeared.  Last weekend I had Sunday evening on Foston beck a belting short session as much for the fishing as for managing to get myself whacked four times by the same electric fence.  Pretty stupid I know but its amazing the choices that you can convince yourself are sensible when you can see a big rising fish.  Wiggling through a gap between a water level fence and underneath an electric wire at a cattle watering place to get a shot at it seemed sensible until the hooked fish shot back towards me and autopilot took over my arm shot up in the air furiously retrieving line and holding the rod high only for my elbow to come in contact with the electric fence, that shock made me straighten up sharpish only for the back of my head to feel the next jolt.  The fish was landed though and after its release I collapsed back on the bank.  Laughing to myself and wondering what my wife would say if she saw me.

The river looks gorgeous but the shot below shows it now needs a weed cut,  I managed to extricate a hooked fish from in the middle of that lot but I don't like bullying the fish that hard and its a strategy with a risk of a snapped leader. 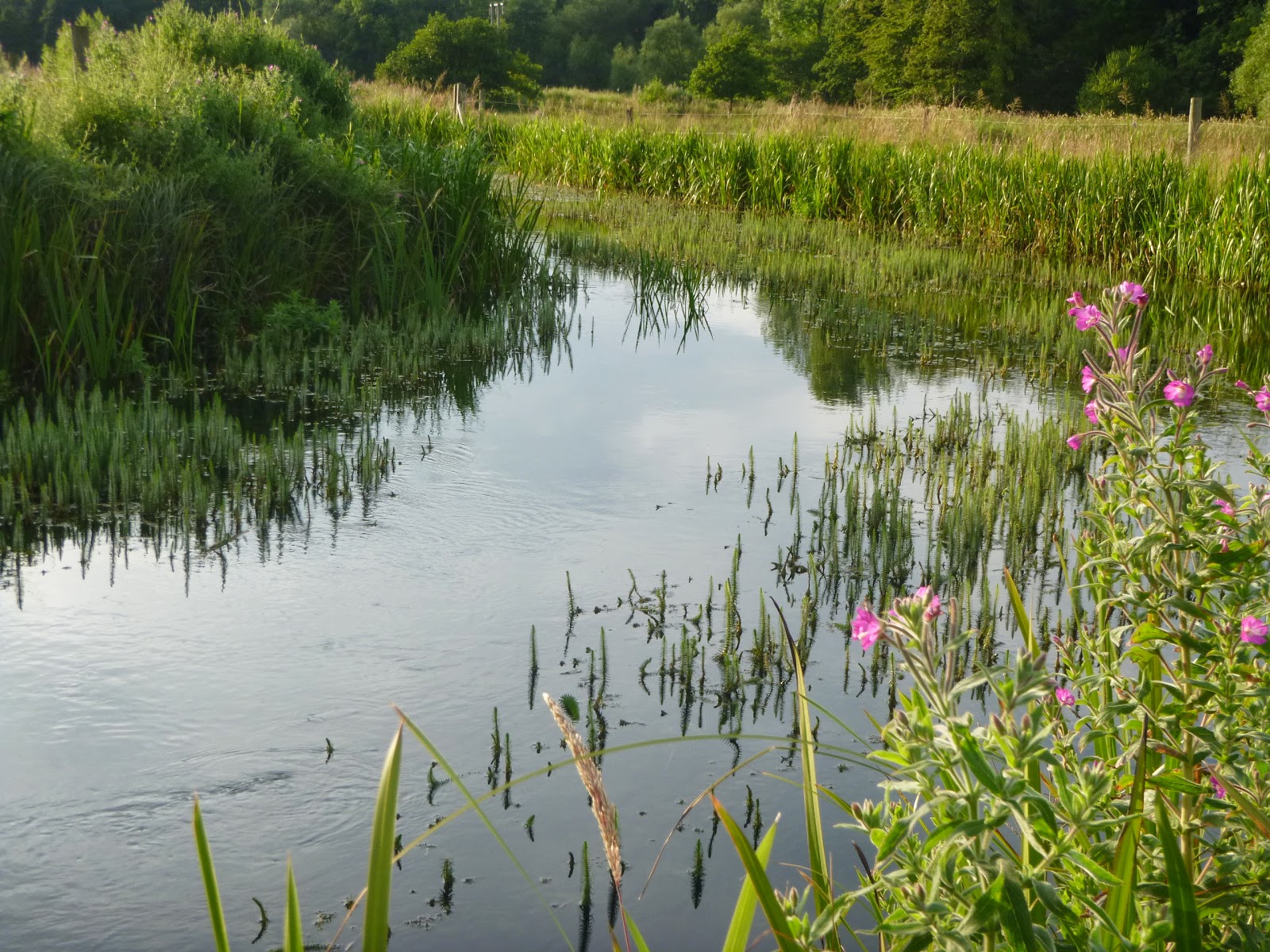 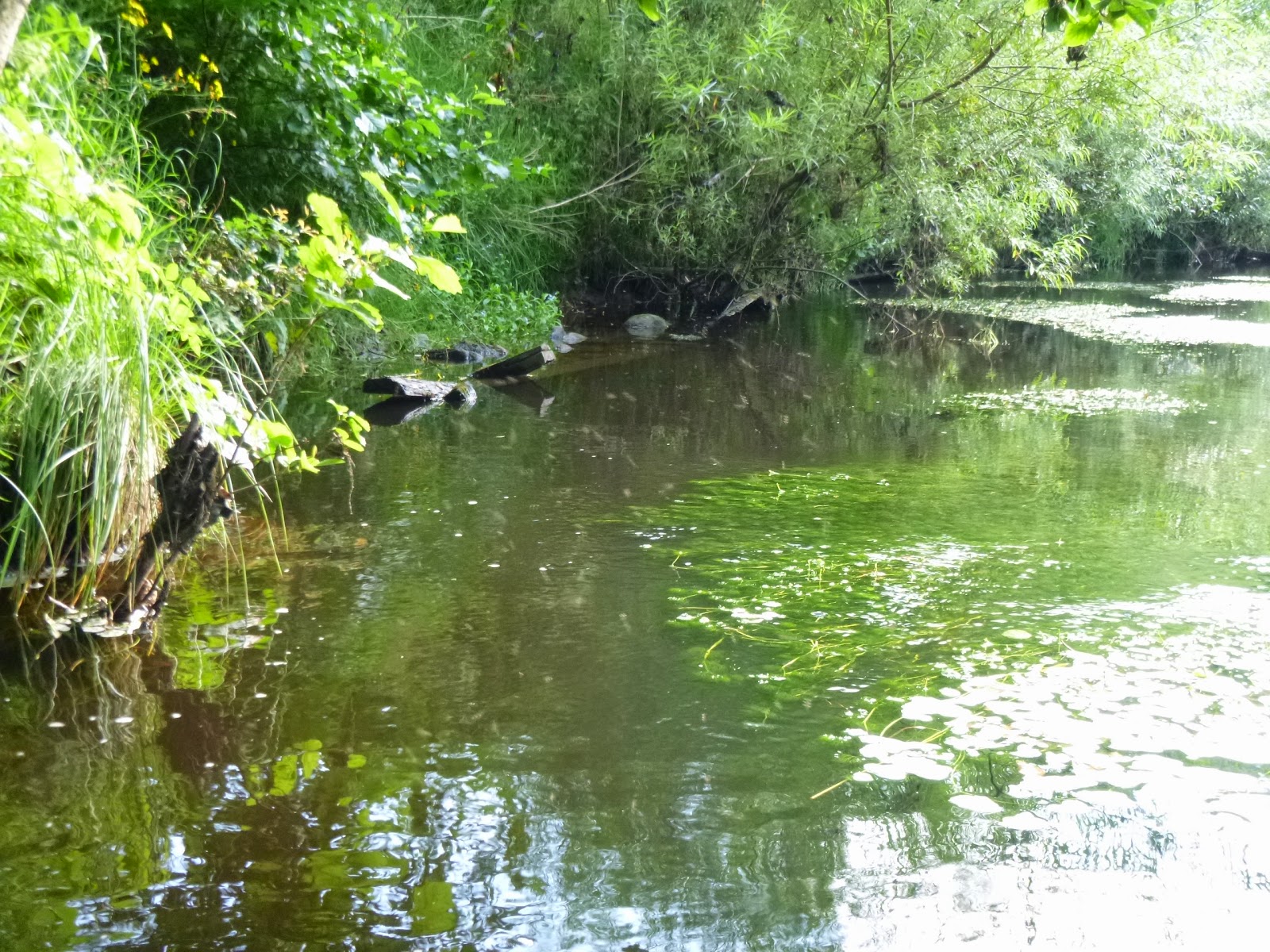 Yesterday evening I decided that despite low river levels and muddy water following recent thunderstorms I would have an evening session straight after work.  On the way to the Derwent I passed a couple of members cars fishing in one valley and ended up at what is usually the most popular parking spot on the river and one I tend to avoid but there was for once an absence of other anglers ,  as I was getting kitted up the river keeper arrived and told me there was a party of three or four upstream and a couple downstream so there I stopped. 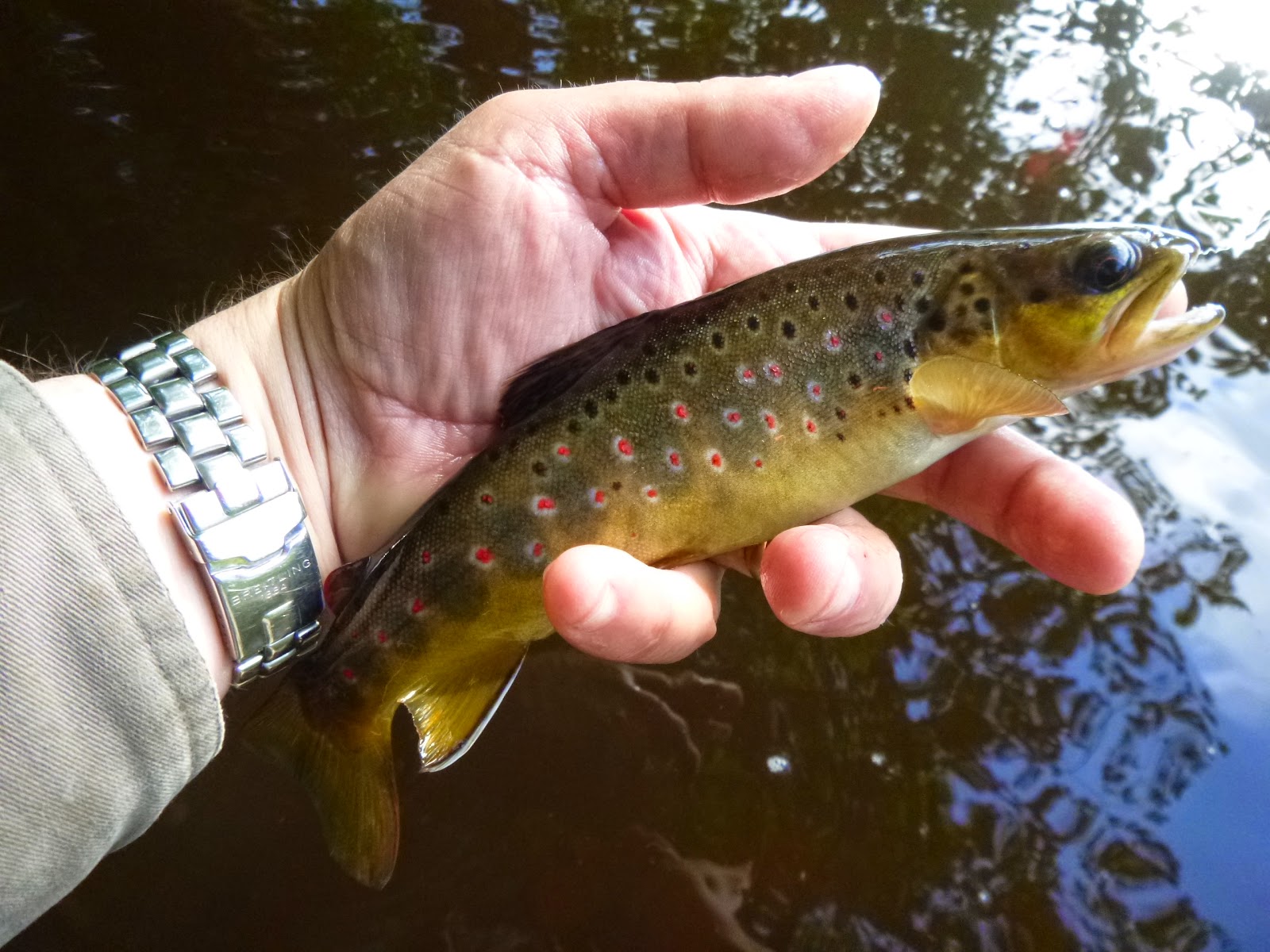 The river was still pretty coloured but low , strange conditions but there was a few rising fish and amazingly those that were rising seemed to like my choice of fly , a small cdc stonefly pattern and all of them stuck ,  All of the risers were small wild fish apart for a small stockie I am not one for numbers but I think I ended up with half a dozen, at one point in the evening I was startled to feel a whack on the back of my head . This came from a racing pigeon with a sparrow hawk in hot pursuit .  The shock of avoiding it and not me sent the poor pigeon of course and it splash landed in the river luckily it managed to flap its way out onto a tree root where it stopped for a considerable period presumably waiting till the coast was clear of sparrow hawks. Here he is looking relieved. 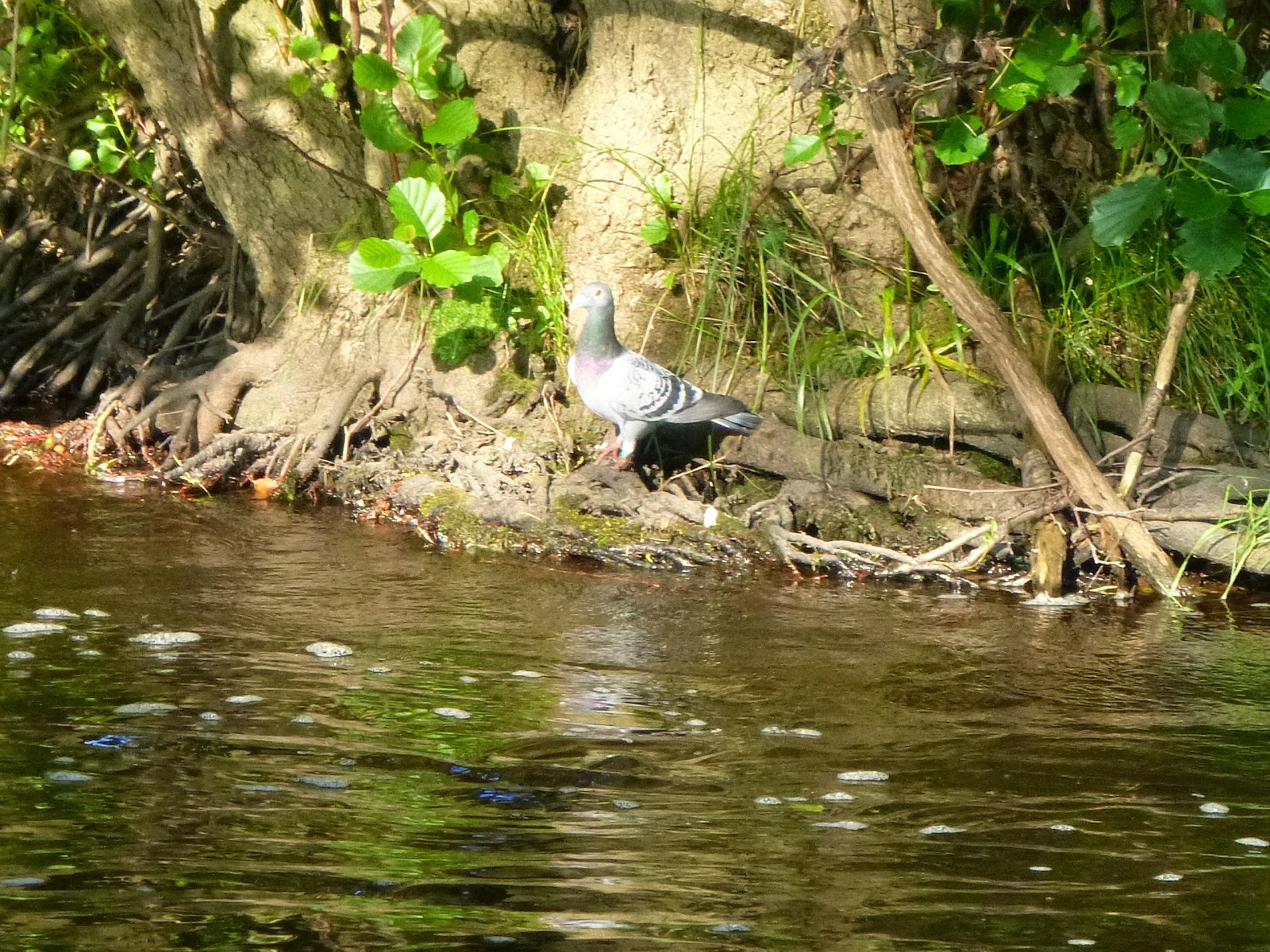 Well the tourists wont want to hear this but we sure could do with some rain , I am going to stop short of a prayer as readers of this blog may recall a few years ago I prayed for rain and it did , in fact it didn't stop for months and we had the wettest summer on record. So just a little rain , at night would be good so as not to piss of the tourists too much ,  My long departed Grandad had a similar view on life to me, and in the summer if we had a heavy daytime downpour he would have a little glint in his eye and simply say " this will shift em of the beach..." 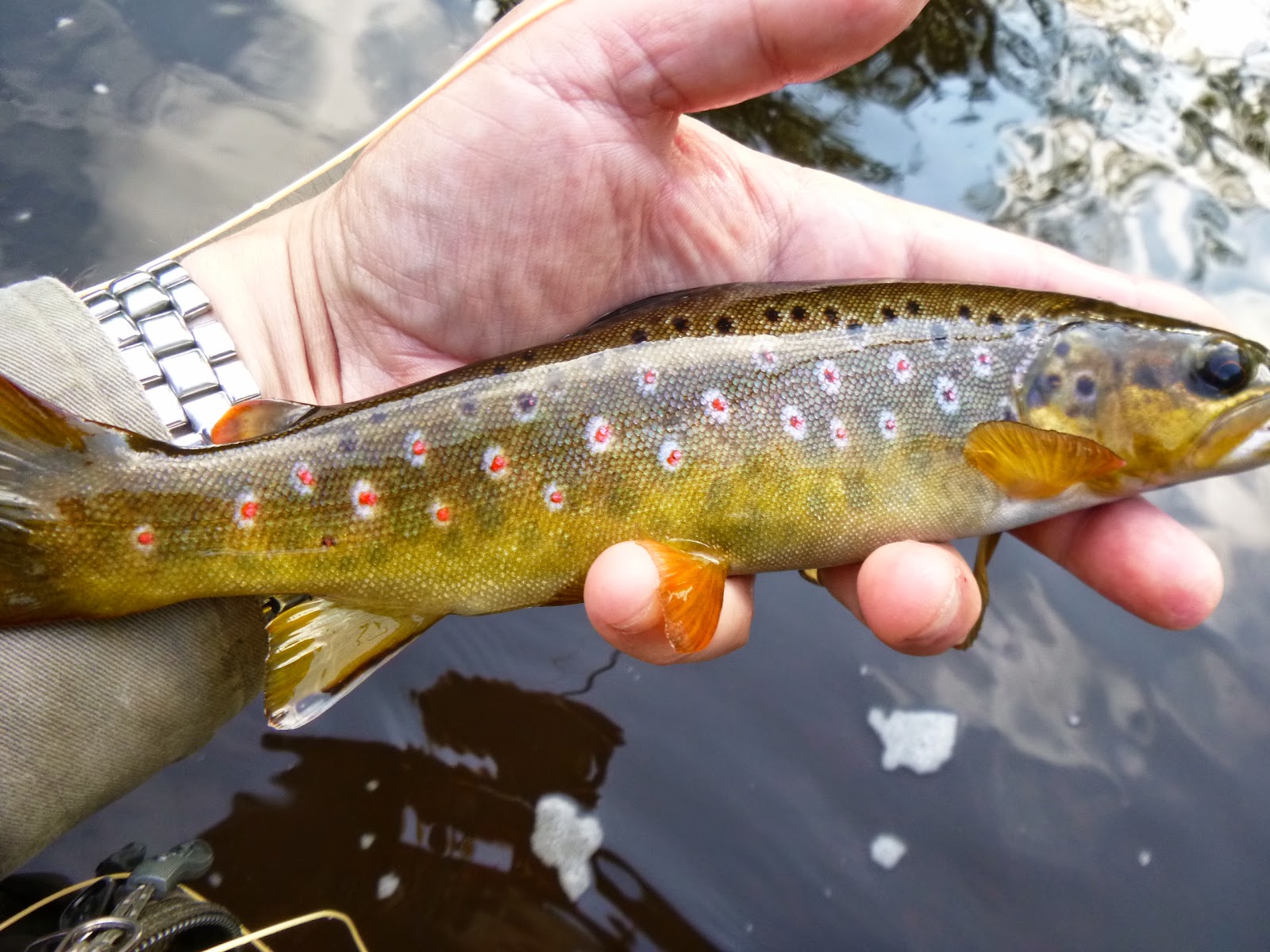 As someone who is extremely proud of his own Yorkshire roots and the areas heritage and beauty it came as no surprise to me that Yorkshire. That area of the world  known to us locals simply as gods country has just been voted by the lonely planet guide as third in its top ten places in the world to visit.
http://www.lonelyplanet.com/england/yorkshire 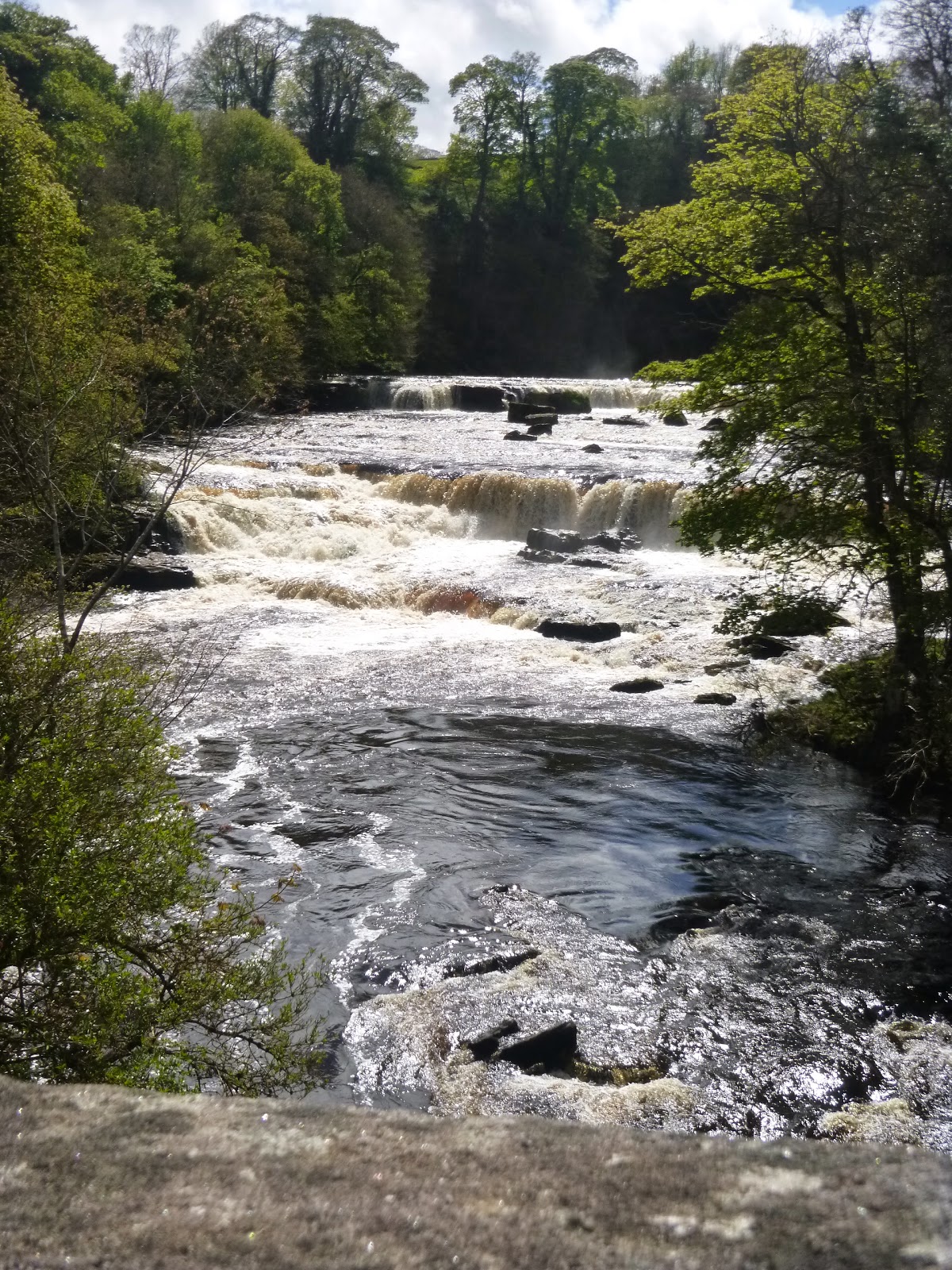 So as well as been an English county that won more medals than many countries at the last Olympics and having countryside that is as scenic as anything you could wish for .  Fishing wise we have beautiful freestone rivers and stunning chalk streams with pristine native brownies and grayling. This weekend we have even got the tour de france .  So next time you read that England is just about London , dont you beleive it.. and as we always say with our tongues firmly in our cheeks its grim up north....

Over the last few days I became ware of major construction works on our local beck.  Now not only do I fish on it and serve on the club committee.  I do the invertebrate monitoring on it for the river fly partnership. I even walk the dog by its banks on almost a daily basis.  I also make my living in the same industry as a freelance estimator. So you could definitely say I have an interest in what was going on.  So donning my hard hat hi vis and wellies I called in for a chat .  It was all positives really.  Well set up site , proper induction , a foreman that knew his job.


I liked how the scheme was organised the damming of the higher weir avoided the need for over pumping and expensive sheet piling or the like. As in a lot of things a low tech solution is usually best. 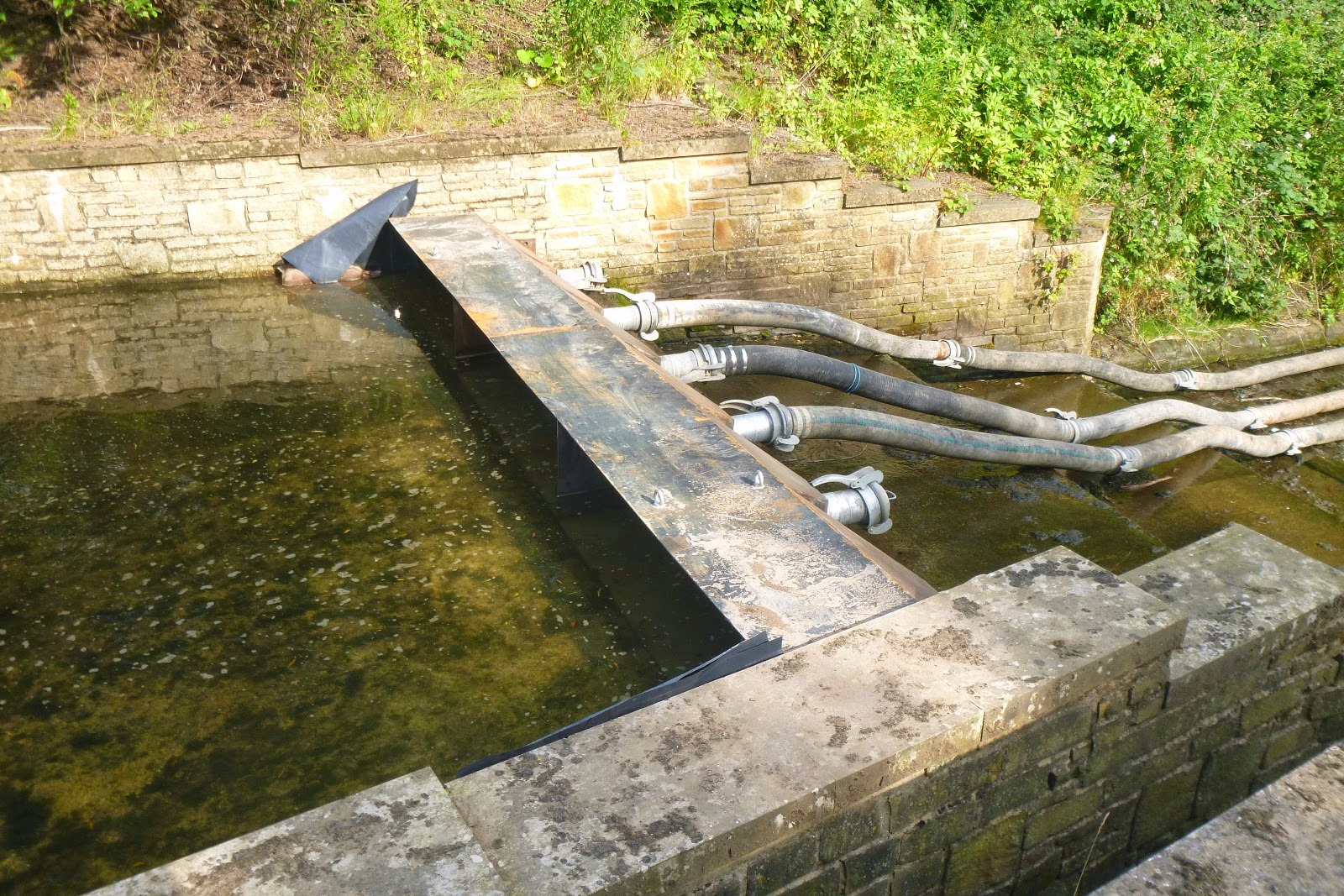 I it was also good to find some guys on site from a ecological outfit rescuing the native crayfish and moving trapped fish to below the bottom weir. It was very good to see the numbers of crayfish that they were finding  too.  There were also eels and lamprey been rescued and moved. 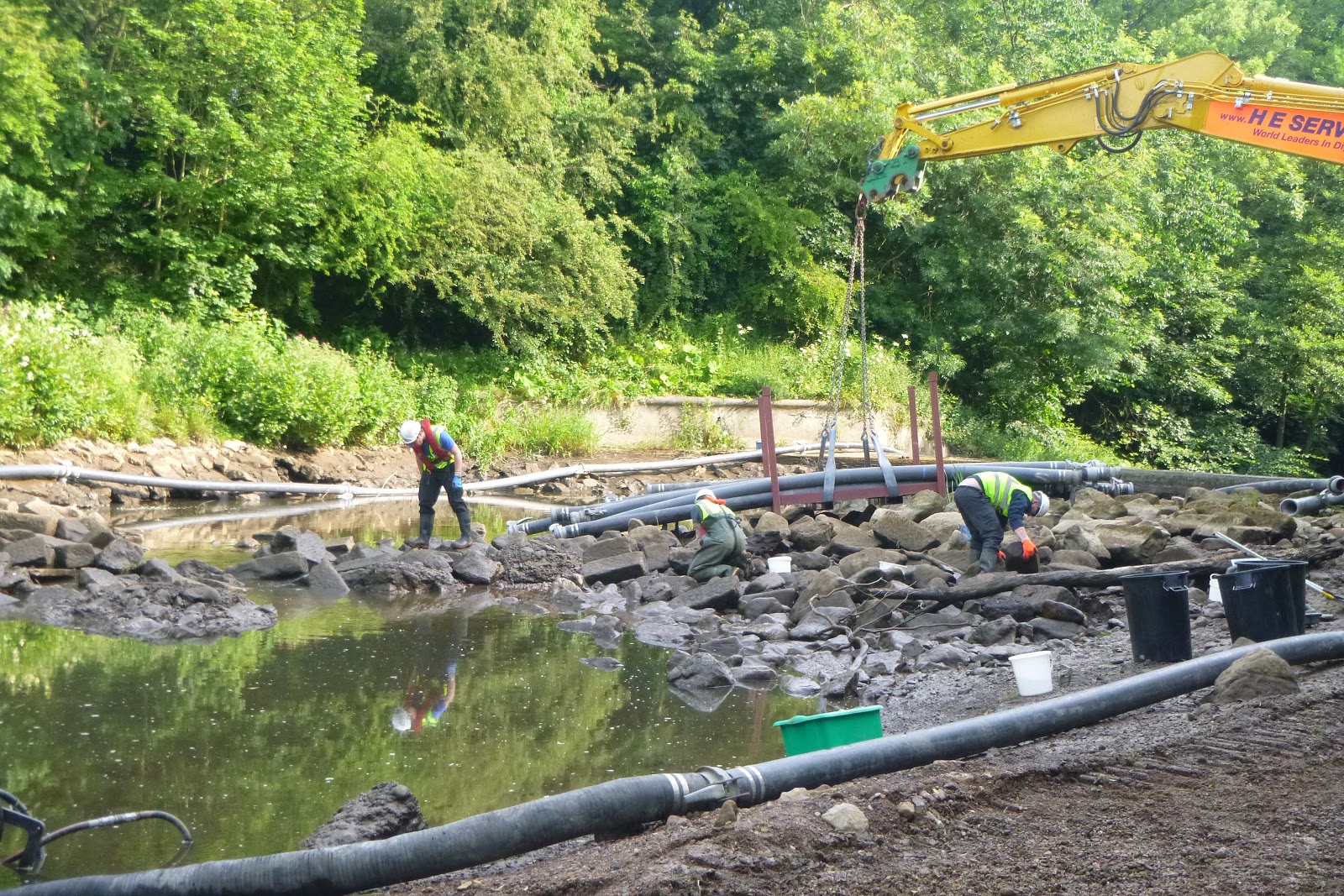 The works are to repair the weir at the bottom of the pool.  Part of the weir is to be rebuilt and part pressure grouted .  Grouting in water courses is a risky business but after seeing their set up I have confidence that all will be well. I will keep having a poke about though.  Not a fishing post I know but its nice to have a positive experience when works like that are carried out on something important to you. 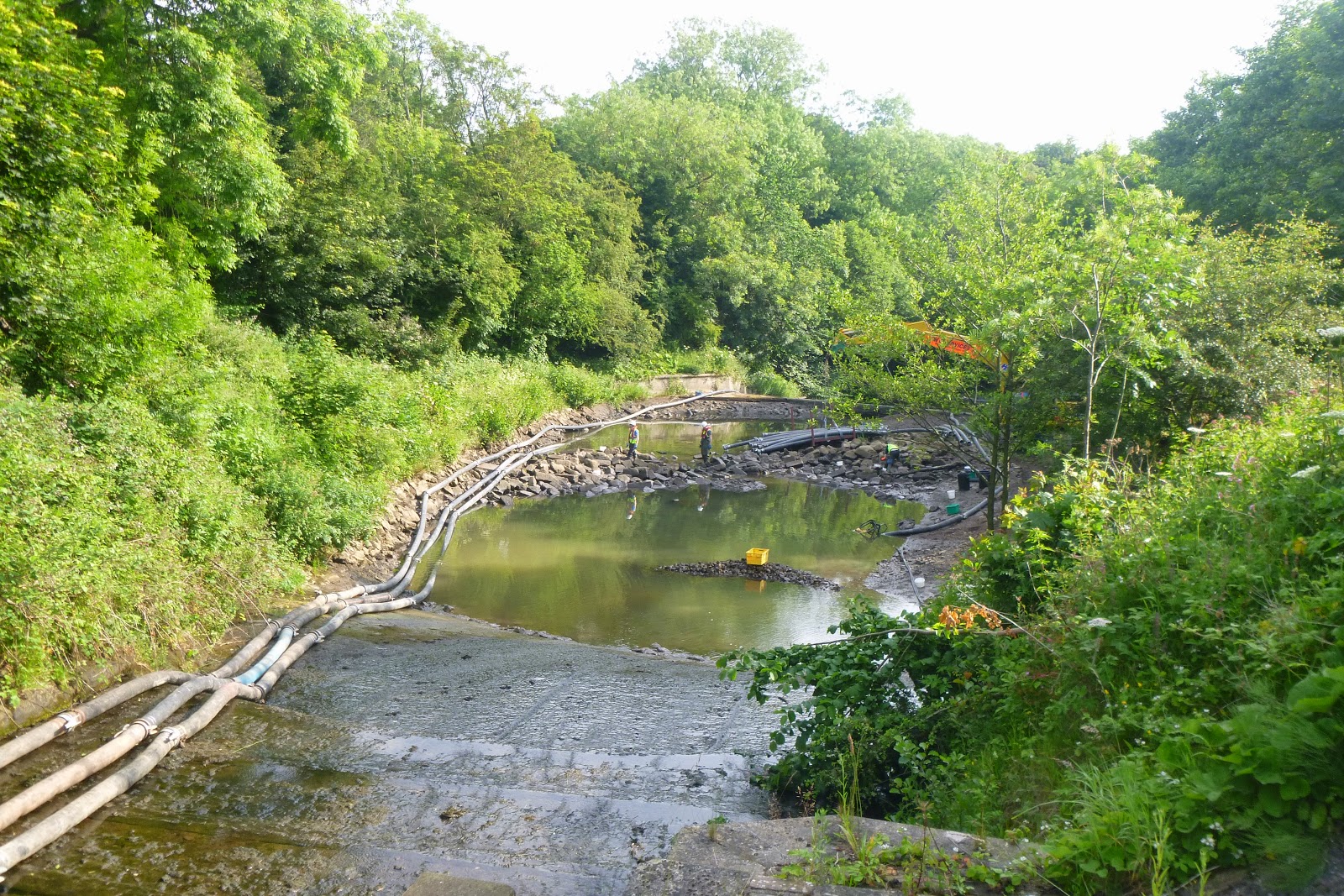 Posted by Becks and Brown Trout at 13:01 No comments: