Grayling. Shy ladies and some not so shy.

So here I am with a winter grayling ticket on the Ure at Masham a stretch I have wanted to fish for many years and its the end of the second week in October So a trip to the river was way overdue.  The trouble is I need a pass from my Sergeant major.  Now evening passes during the summer are easy to get.  a willingness to decorate and help earns sufficient points to get an evening pass which is all you need in June and July , but in October and November what is needed is a full days pass..This is a different problem tact and diplomacy are needed .  However after convincing Sergeant major that a girlie day shopping with number one daughter was way over due the pass was stamped.

Now I have the pass and a reasonable weather forecast so the day is set. Arise early and walk dog,  Then away towards the river only to be met with problem number 1 a market town along the way is the scene of a war time recreation celebration.  many hundreds of of people in 1940s clothing and jeeps and trucks all decked out in 1940 kit.  So wastes 30 mins getting through the choked town on route and then 20 miles further on they have a bridge out and theres a 15mile diversion hope this isnt a omen for the day ahead.  Eventually arive at the river.  First impressions are its worth the journey

The Ure is much bigger than the streams and becks I usually fish, but that was part of the attraction.
The river combines long slow pools and some nice rapids and deep run offs . It looked delightful but a bit daunting for one who is used to be able pick out the fish holding areas at a glance on the smaller rivers. The trees are starting to show Autumn colours and the air has taken on the feel of Autumn. "Thin" is how my father always described Autumn air, I think I understand what he means.  The river looks beautiful and is the colour of weak darjeeling.  I had read about the tea colour the river shows and it is correct definately a darjeeling.  Its a beautiful place I had only walked a 100m and had seen two kingfishers generally the river has a lovely quality although on first inspection there seems to be little weed growth and the wading looks interesting due to the nice smooth looking boulders that seem to be scarttered everwhere.

I spent most of the first hour just heading up stream and inspecting the water looking for the holding areas.  As the river is still at summer level the next time I come it may well be a good bit higher so any observation made now will be useful in a month or so when the river is more cloured and the levels higher.  A few minutes after the wind put in a good gust the leaves were thick on the water surface and the fish were rising among them.  So in I went with fine tippet and an aphid pattern.

After working my way along the stretch above casting to rising fish under the overhanging trees results were trees 3 small out of season brownies 4 and grayling nil . Hope the ladies arent going to be shy today, when I reached the end of  the stretch I left the river to find this lovely little fishing hut.  First thought was I wasnt issued a key but amazingly door was open and inside was a table with a few glasses and a visitors book, Opening the first page the book had the entries you would expect regarding fly hatches fish caught etc written in well educated hand however it was also obvious that the hut used by the local teenage population and judging by the entries not all the local girls are shy , Several  girls are mentioned by one presumes the local boys. I shall hope that the entries are due to over active teenage imaginations and are not factual as one young lady was mentioned in glowing terms by several hands. I have to say that the entries did make interesting reading maybe there is an idea that could be copied in other catch return books as it was more interesting than many but there again perhaps not . 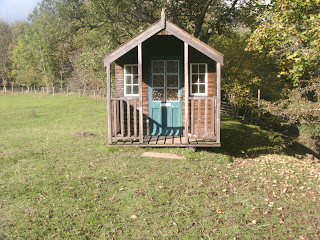 Anyway moving on.  After returning to the car I tried a different section of the river and at last the ladies came out to play a klinkhammer into a nice deep fast run brought four fish in quick succession, its amazing how freely the ladies rise to a dry but they are frustrating as they seem to miss the target so often, the first three I captured managed to get back into the river before I could take the traditional fish in hand shot. So it would appear some of the local ladies are shy .  Eventually I decided that the best way was to save their blushes was to take a quick pic before I took the next from the river , so there you have it a Ure Grayling shy maybe but pretty non the less. Cant wait for the next visit

As the autumn leaves start to fall and been out in the woods with the dog reminded me that once again it is Fungi season. As I am trapped indoors and havent been anywhere interesting fishing for a few weeks I thought would post on my blog a piece I did a year or so ago for a Fly fishing forum on Amadou. A fungus that is of interest to the angler is Fomes fomentarius or the Horses hoof fungus. Anglers know it better as the plant that gives us Amadou.

This is the bracket fungus that is the source of Amadou that wonderful material for drying your dries....
every year I take a few brackets and make some amadou for me and a few buddies.  This the same fungus that makes firelighting tinder.
The time of year is right for the brackets to be at their best. On Sunday morning myself and number one dog visited a stand of silver birch trees that have always provided a few brackets for the production of amadou.

The fungus fruiting body  is usually found on dead or dying Silver birch trees ( The fungus actually infects and kills healthy trees then lives on the dead tree).  So you need to find yourself a nice mature wood that isnt kept to tidy I have been taking mine for about 10 years from the same stand of trees. But the only advice I can offer is that it seems to be most common on the edges of woodland and in areas that arent to wet. Northern hillsides seem good, Once you have found an area that produces it keep the area to yourself and dont take to many brackets of the same tree let it mature to spread for future years. This stuff lasts for years and I tend to give bits away as its free so usually end up with none for myself and have mates that have had bits ive given them for years.

The selection is shown below, the largest and darkest was collected as an example of what not to get, the ones you want are the lighter grey ones around 4 or 5 inches across or even smaller but these are all good examples for you to recognise .


I have taken a saw cut across three of the brackets to show which is the layer you want. Its the fawn layer that looks like chammy leather that is underneath the outer grey shell this area varies in thickness . The area that looks like rays needs to be cut away
This the oldest bracket and the layer under the outer skin is very thin and not really useable 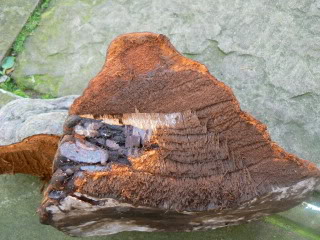 The first stage of preparing it is to trim up the amadou section. After trying various methods I have decided that the best way is to first trim of the hard grey layer and the best way for me is with a sharp serated carving knife. It isnt to hard to do but if you try and use to old a bracket you need a hammer and chisel. I think that is where many people struggle. Doing it this way allows you to have a good firm grip on the rest whilst yu are removing the hard outer layer and you end up with just having to cut of the rays under the amadou layers, A good tip when you are out looking for this stuff is if you cant get into the grey outer layer with a sharp penknife you are going to struggle with the rest of itYou can see the layer of amadou now is at the top of the brackets and is already looking like the finished product. Next all the soft tube like gills underneath the top layer  should be cut away leaving the layer of Amadou. 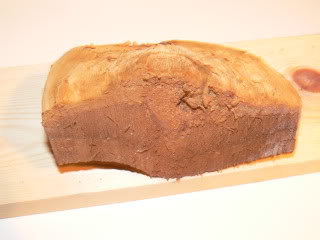 The Trimmed up amadou layers need to be soaked in a washing soda solution,  This cleans up the pieces and removes all the black spores and also allows you make the pieces flexible . Once the pieces have been soaking for a week in washing soda solution they need to be softened up.. I have found that hammering while they are wet rather than dry gives best result I use a fairly heavy hammer and just let the weight of the hammer do the work if you arent careful you can just mash the stuff and when it dries it just breaks up... 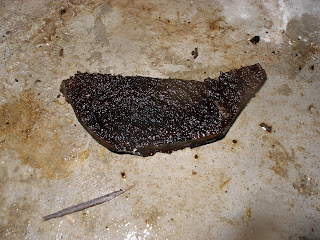 After initial hammering the pieces spread and become softer. 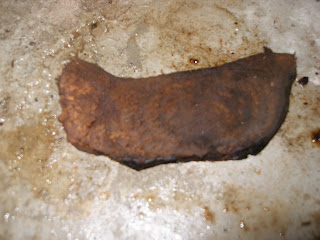 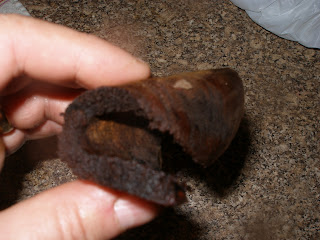 Different pieces need different times I have found that old really hard pieces are better soaked for a week than gentle hammering to just soften then soak for a week, and so on...The older and harder the longer it will take After just a week soaking a bit of a beating and a thorough rinse out this piece is already nice and soft and very absorbant and is very close to being finished 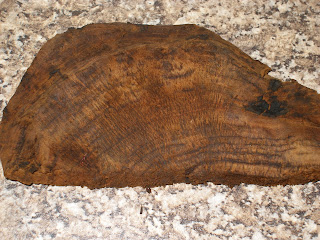 Once this is dried I will trim to shape and glue two seperate squares on to a leather or fabric backing , A ringlet and zinger completes the job,
Posted by Becks and Brown Trout at 12:35 4 comments: