This weird year continues and today has been no exception when the wind dropped it was almost like summer and when it picked up again it was like a blast from Siberia.  This had the holiday makers scuttling back and forth like crazed yoyos and at the moment we have them here a plenty  in equal numbers they were out in shorts and T shirts and in scarves and overcoats.  I hate bank holidays , well hate is perhaps a bit strong but living in a tourist resort means that at the first whiff of sunshine and fair weather all the roads round here are clogged with tourists and parking spaces are as rare as rocking horse shit, at times it gets a bit trying.  But I do appreciate that I live in a beautiful part of the world and can understand others wanting to see it.  Its just a shame they cant space out their visits and not just turn up on a few weekends a year.  Personally I think the beaches are superb on a frosty February morning its a shame other dont see the attraction. 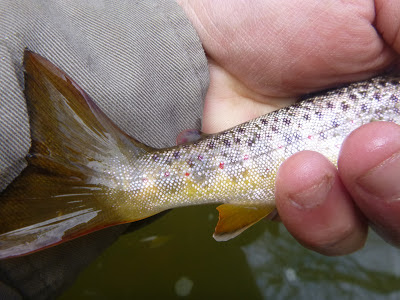 Winter or Summer a weekend morning routine for me is a long work with my ever faithful hound ruby the wonder dog.  This year our spring has been dreadful the cold has hung on like the proverbial on a blanket.  Fishing has been slow and it has been as if winter has just warmed up a little but spring hasn`t actually arrived.  Usually by this time of year my winter hunger has been satisfied and I am settling in to the routine of early summer fishing. But not this year. So this morning I made the brave decision to combine the dog walk with taking a  rod along for the of chance that ruby the wonder dog decided to play ball and actually leave some water undisturbed .Labs are fantastic dogs but I have to admit my normally pretty well behaved dog becomes deaf to all commands when faced with water.

Anyway feeling brave and getting out early I managed a  parking space and the two of us headed upstream.   Down near the sea the beck is exposed and the wind whistles up the valley making casting a line an interesting challenge. 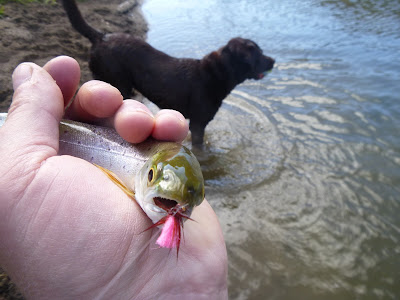 First to fall for the klink was a tiny sea trout smolt Ruby wasnt impressed by me catching something by now she had made her first catch a fine example of a tennis ball god knows how she sniffs them out. As we worked upstream the Sea trout smolts threw themselves with abandon at the little klinkhammer.  After catching a couple I moved up stream looking for the wild brownies that are here as well its odd how the smolts appear I can fish here one week and see none and yet a week later the stream feels full of them. 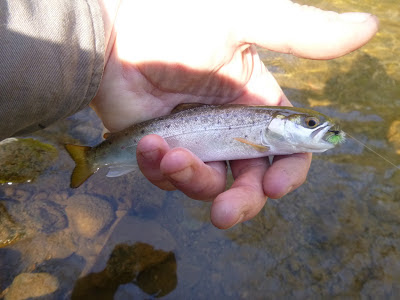 Only a half a mile further up the valley becomes tree lined and more sheltered and a series of pools and waterfalls makes for some wonderful fishing scenery. This is one of my favourite litttle pools and dont ever remember fishing here and not catching. 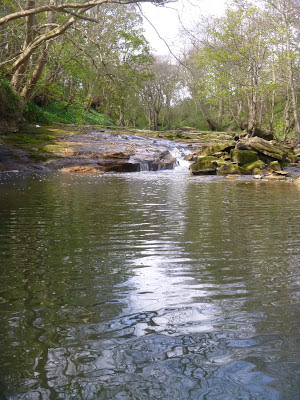 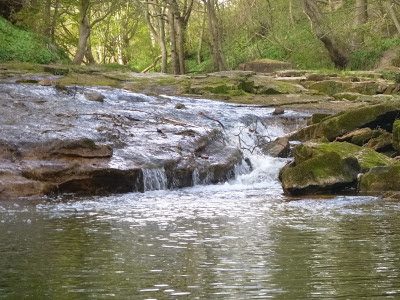 Today this was one of three that came from the head of the pool.  All on a tiny size 20 Adams the fish treated the klinkhammer with disdain .  Generally the trick with catching these is fly size and presentation almost all patterns are taken but a heavy leader or splashy cast sends them down very quickly. 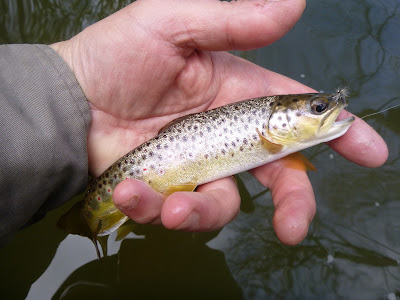 Whilst I am fishing the pool Ruby the wonder dog waits patiently , well when I say wait her lead was looped around a tree root .  I reckon she needed a breather anyway. 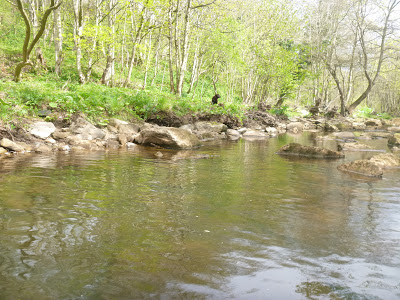 I love catching big fish as much as the next bloke but I dont think the charm of catching these little gems on these beautiful becks will ever leave me.  Anyway after a few hours we had done enough and breakfast was calling so all that was left was just a chance to show of our catches I had to admit Ruby had managed to bag herself a keeper . 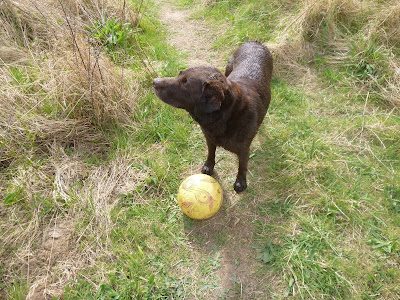 Posted by Becks and Brown Trout at 21:25

superb! Lovely looking stream and browns, the seatrout smolts have started appearing on my local too, sooner there off to sea the better.

Very nice Andy. I used to catch minnows there as a kid. Must get myself up that way again and give it another go.....without falling in as I did the last time I fished it with you!

What a lovely looking spot!

It is a lovely little beck I have grown up within a couple of miles of it and I walk the dog along it several times a week. Its a place I am very fond of.