The end of another season and another another lesson learnt 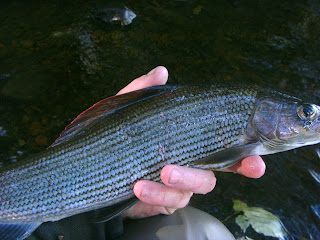 Sunday was the last day I will get out out trout fishing for this year.  The occasion was marked by a trip to the Ure with a guest. We both had a good day.  The weather whilst not been perfect was as good as you can reasonably expect with Autumn nearly upon us.  Fish were caught but as is usually the case wth rivers it had to be worked at and the fish earnt.  On the day small size 16 cdc emergers were the flies that worked for me.  Fished in the faster runs for the Grayling and in the tails of the pools and the eddies for the trout.  In the early afternoon they both rose freely anough. The best of the fish were the two I picture here the grayling was a very long fish that seemed thin for its length and came to the net without  to much fuss the brownie was different it fought like something twice its size. 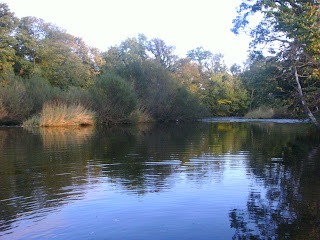 later on in the afternoon between five and six.  The grayling had long since finished their activity but I fancied the last hour in a large pool on the river.  There would be trout rising there I was sure.  The pool has a large gravel bar down the middle of it and I was stood on there which gives you command of most of the water.  I was aware of fish rising to my left towards the bank but casts towards them were into the setting sun and after wasting about 20 minutes without a single response and not willing to wade back down and across the pool due to the small time left I decided I should move as I had agreed a finish time with my fishing companion. 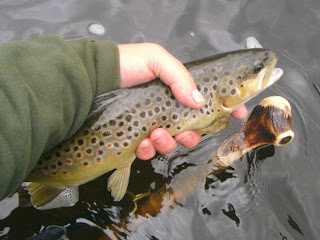 Reeling in the fly came skittering back across the surface a bow wave followed it and a splashy rise failed to produce a hook up.  A light switched on in my brain and I worked my way back down the pool .
As I reached the bank I spotted them , sedges dozens of them . The sun had stopped me seeing them. I had been to complacent and missed a golden opportunity. 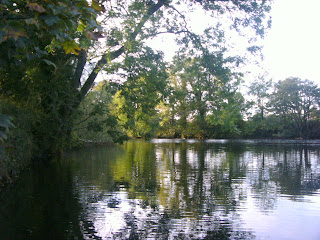 I had about 10 minutes so I waded back in and put on a sedge pattern,  in a rush I foolishly didnt swap the 3lb tippet for something stronger,  I think you can guess the rest . Second retreive and a big bow wave followed by a savage take.  The tippet parted and a large brown jumped and swam free.  I should have known better.  .

I've enjoyed reading your season. Thank you for your sharing posts. Have a good winer and a great season next year.

Oh yes...how many times this has happened. Lovely read...I really enjoyed it. And that brown has absolutely wonderful spotting!

Caddis can often be the masking hatch, and some so small you can miss them all together.

Well done on your fishing it out.