Late Summer grayling on the Ure,,,

At this time of year I I think that a good few hours out on the river is especially precious .  Days are shorter now and short days mean the end of my preferred evening fishing.  So when I saw the weather forecast this week and it was predicting Thursday to be a day when the recent winds will reduce and the days leading up to it been dry a half day was booked at work and after lunch I headed to the river 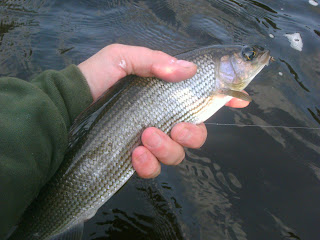 The river surprised me when I got there.  There was about a foot more water in it than I was expecting but it was running pretty clear .  Very coloured as usual but clean.  It was also colder than expected, I made a mental note that next time it will be the neoprene waders and not the lightweight breathables. 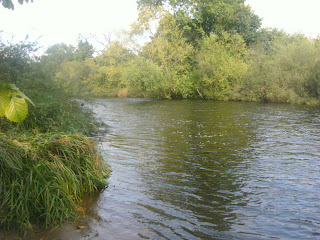 After starting of with  tan and then olive and brown coloured klinks and not getting a sniff of a fish.  I swapped to a black klink. Actually I had a few that I had bought as my fly box was very thin and tying time has been sadly lacking As I prepared to lengthen line to cast again I dumped a few feet of line on the water surface and had a take almost at my feet , a tiny grayling showed me I had found the right fly.

I had about 8 or 9 nice Grayling of a respectable size in about 90 minutes of activity in three different runs.  Nice fish including this one with a most unusual scale pattern. 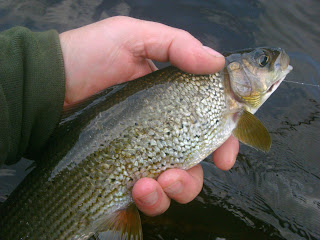 The water was pefect for the dry fly .  It has better clarity than the pictures would suggest and the extra foot of water put some real pace into the runs.  I am gratefull that the grayling will rise for a fly well into the autumn. I will fish with a nymph for them but I love fishing dry fly.  Saying that one of my aims this year is to increase my knwledge and capability of fishing the deep nymph , czech style.  I am particulaly interested in the use of braid long leaders to aid bite detection, a method that is been discussed on various forums at the moment.  I will be reporting through the winter on how my efforts are rewarded. 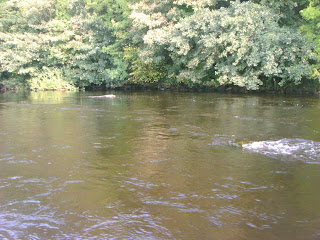 The Grayling were of a nice size and offer much optimism for future years .  The fish were in fine condition , they are my favourite game fish. With the  benefit to us of extending the fly fishing season well into the winter months. 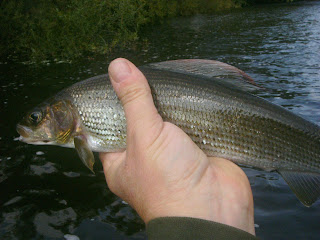 This is the black klinkhammer that did the trick,  I have carefully retained one and my fly tying will in future include this variation , they look to be about a 16 with a thread body although I find klink hooks a mystery as the sizes from different manufacturers to vary by an enormous amount.  I have also purchased some aerowing material to start using for posts.  I reckon I can tie a reasonable klink but not a really good one.. That is work in progress.. 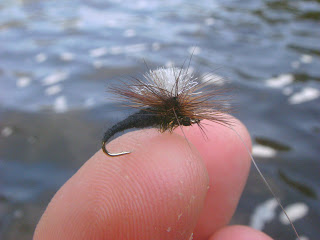 After a couple of hours the grayling ceased activity but odd trout were rising in the slower back eddies , I ended up with three , a daddy long legs accounted for this beautifully coloured fish.  Although the daddies seem to have been thin on the ground this year I wouldnt venture on to an autumn river without some in my fly box 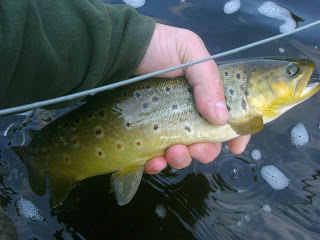 Posted by Becks and Brown Trout at 09:59

I enjoyed the picture as well as fishingstyle,thanks a lot