Following on from my last post there is a small spate river that offers a bit of sea trout fishing if water levels are up to scratch.  Sadly once again the rain gods failed to smile,  but been an eternal optimist which is surely an anglers greatest gift , that and just been do damned stubborn to give up.  I decided that one morning I would take advantage of the very hight tides and fish at the mouth of the river and sea if anything could be picked up in the salt water. 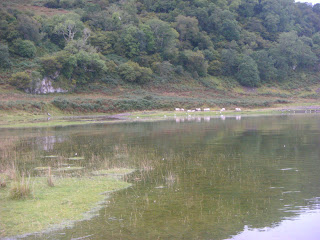 As I got down to the river mouth I wondered what the sheep were fussing about and realised that they had ended up marooned on a new island the high tide had created , they soon settled down and just watched me. I bet the lamb has a lovely flavour with them eating all the salt covered grass.

It was interesting wading out along the river bank that was now covered by a foot or two of sea water . There was some sign of activity there were a few small silver fish jumping where the sea water was meeting the fresh water. I kept a careful eye on the river bank position a wrong step and I would be in pretty deep. 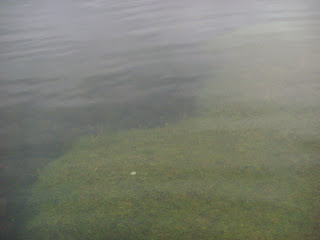 Despite a couple of hours of effort I couldnt raise anything , however I did nearly give my wife a heart attack as she said when she looked out of the window I seemed to be wading in the middle of the sea as the tide was in so far.  There was one accomplished fisher that was doing better than me on the sea loch banks.  I saw it with two fish one looked like a decent pollack the other an eel. 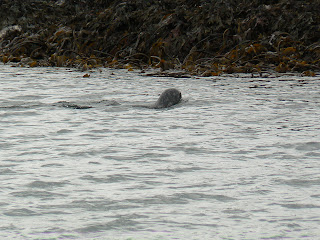 The day after I had an exploratory up the river to see if there were any little native brownies.  The local scenery here is stunning with some really inviting pools. But wet flies and dries alike failed to raise any enthusiasm. 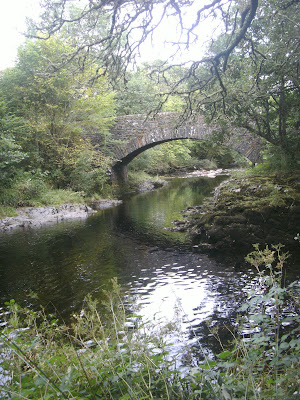 The damp climate makes for abundant growth funghi are growing everwhere . Wonder if they are edible 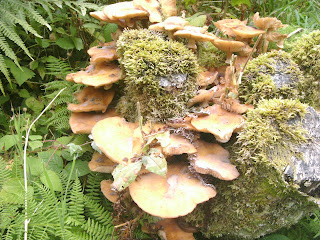 on the last full day of my holiday the rains at last came and an early morning session saw the river about 2ft up ,  In a few hours fishing I hooked into one decent sea trout ,  sadly as I drew it to the net I could see it was hooked right on the neb.  and sure enough it detatched itself pretty quickly.  The river lost that two foot of water in about three hours,  The speed of run of is incredible. 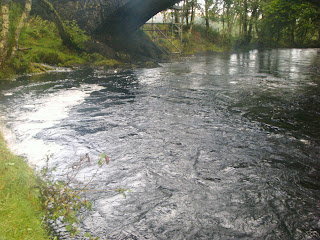 This is the pool below the road bridge I hooked that solitary fish just infront of the scaffolding.  Sadly The fish is still in the river.  The place is beautiful we watched Ospreys hunting on the river and the sea loch from the lounge window and had buzzards over the garden.

The Cottage we rented is on this estate anyone wanting a holiday for the family combined with the chance for a bit of fishing wont be dissapointed. We rented the Old Kirk...

http://www.kilninver-estate.co.uk/cottages.html
Posted by Becks and Brown Trout at 22:12

Looks amazing,you still need some luck even on holidays?

Amazing shots,thanks for sharing your holidays with me.