Lords and ladies and a stream

This Sunday was mothers day, a day to spoil the mums in our life.  My wife and mum of three announced this morning that "wouldnt it be nice to visit Nunnington Hall, we could have a picnic by the river and you can fish for an hour or so on the Rye then we could visit the hall". I have never had any doubt that I married the right woman... 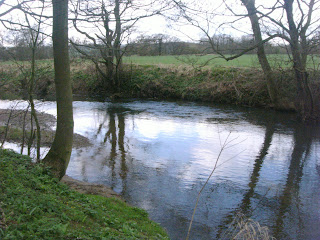 The river Rye flows through the hall gardens and the stretch I fish is not to many miles away.  After parking by the river and enjoying a chilly picnic I set out along the river .  Grey cold and damp best described the weather  The river seemed to flow with that oily texture that comes from the cold.  I made a note of the time.  Like all anglers time loses its meaning when I am on the river and this was not a day to overstay such a generous gesture. 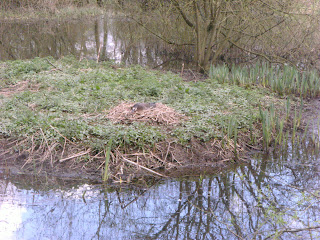 There was no rising fish and to those unfamilier with the  river you would swear it was empty. I skirted the bridge pool, readers of the blog will already know of my affinity for that stretch of water.  I headed up stream to the longer shallow glides, I felt the open banks and weak sunshine would have had more chance to raise a few insects than in the shelter of the pool.
There was no sign of rising fish even the nesting birds were sitting tight as I passed.  The signs of spring are there but they are still only signs.  A nymph worked along the creases and eddies brought nothing, the leader never wavered.  I thought about the evening last may when the mayfly created madness and  I remembered my note to myself then that the river is stuffed with fish.  Eventually I noticed a single rise in the tail of a riffle.  I worked my way up trying to remember the rise position.  I started casting to a point a few yards below. The klinkhammer had worked well for me the weekend before so I using at again.  Fift or sixth cast a grayling rose to the fly.  I knew instantly by the nice neat rise and distinctive gloop. 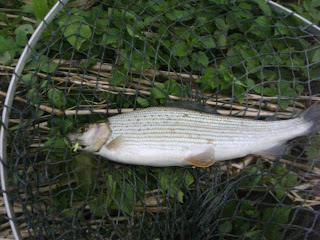 The grayling posed for a quick snap then was released, the next couple of casts resulted in two more. Not wishing to catch any more out of season fish I kept on the move. Shortly afterwards  a check of the watch revealed I had been gone about 60mins...As one doesnt ever take liberties with fishing time given on mothers day I headed back to the car.  My timing proved to be impeccable my return to the car was met with a smile and have you had a nice time?, Not are you sure you dont want to stay longer. 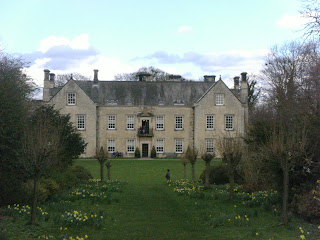 After changing we headed of to the Country House.We did the tourist route.  A guided tour followed by a tea in the garden,,, A strutting peacock wandered my way its tail spread,  As it came closer I ran through the patterns its plumage gives as I wondered about perhaps plucking maybe just one eye as it passed I heard a hissed " dont even think about it" Smiling innocently I returned the look. So that was mothers day for me  a house of a Lord and the lady of the stream.  A good day. 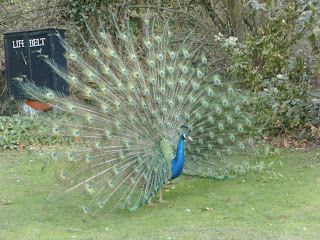 Posted by Becks and Brown Trout at 21:48

Having grown up around an rancher who kept Peacocks.... I understand the urge to snag just one plume...

She sounds like a very nice lady. You are a lucky man!

Everytime I go by the Peacocks down the street, I think about snagging a feather or two. It's hard to resist.