Monday was a day on holiday. I am enjoying the novelty of fishing the Ure and the local becks are suffering from a severe lack of rain.  March around here was the driest for 50 years and the streams are down to mid summer levels.  The drive over to the river was quieter due to avoiding the weekend.  On arrival the river had dropped another foot since the previous week and was clear but cold.  The Grannom were hatching in greater numbers but activity on the surface was ltd. 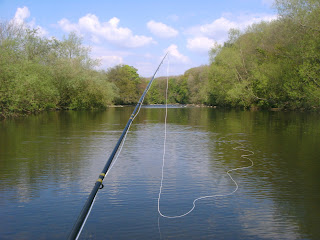 At times the river and weather  had a July feel to it , Not what you expect on a mid April day.I started on the dry fly putting a grannom through likely runs and also trying a klinkhammer.  Eventually I had wasted to long and decided that a Nymph in the deeper glides was next tactic, 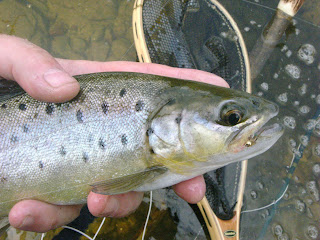 The result was pretty much instantaneous Several fish coming from the deep glides under the bushes on the little green arsed nymphs I had tied up. However that tactice worked on some of the deep slower glides but I couldnt get it work on the faster water. 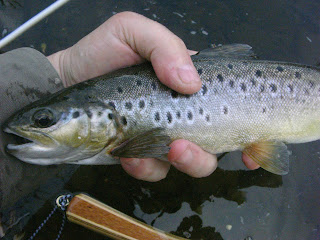 The rivers down a long way from the winter normal levels. But the bankside greenary is really building up. It is a lovely river to fish and such a change from normal haunts. 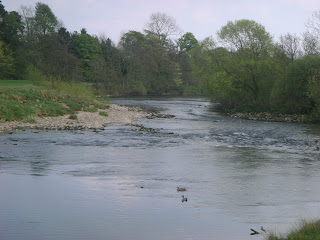 After lunch I had moved to the top section of the river , The water changes its character again here, At last there were some rising fish,  They were obviousley small but rising freely to some olives,  Eventually after changing to a size 16 olive klink. The guilty parties were unveiled as small grayling. I didnt want to catch any more out of season so that fish closed the day... 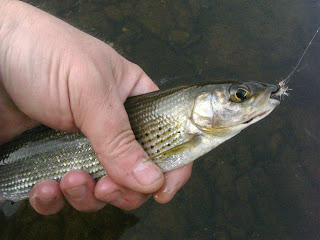 Posted by Becks and Brown Trout at 15:05

Absolutely beautiful water! Watching them rise to the Grannom there would be worth just setting down and having a nice scotch!

Sorry about your water situation. I think we got it all, on this side of the pond. Still looks like a nice flow.

As it was my birthday fter dinner I did have a wee dram.. A glenlivet french oak reserve,, A lovely malt. And shoreman the river is delightful...

Sweet! Even a grayling in the mix. well done.