The title is an old saying popular in the English language and it refers to things which are totally different ,  It  also links the two places I have fished this week rather nicely .  Not having had any significant time of work since Christmas I decided this week to have three days of.  Wednesday I planned to fish the Ure .  A beautiful Yorkshire Dales river flowing through Wenslydale .  Interestingly Wenslydale is the only one of the Yorkshire Dales which is not named after the river that flows through it ,  it is named after the town that is shares its name with .  It also shares its name with a famous cheese , Wenslydale is a delightful crumbly pleasure recently made famous by that cartoon series Wallace and grommit.   The chalk half of the saying is relevant because of the delightful Chalk stream that I was invited to fish on during Friday .  The Yorkshire Wolds are a series of rolling chalk hills that are host to a few Spring fed streams of extraordinary clarity and richness ,  it was the Driffield West beck that a Friend invited me for a day ,  but first was the Ure this was one of the first areas we explored my companion is there exploring the faster water. 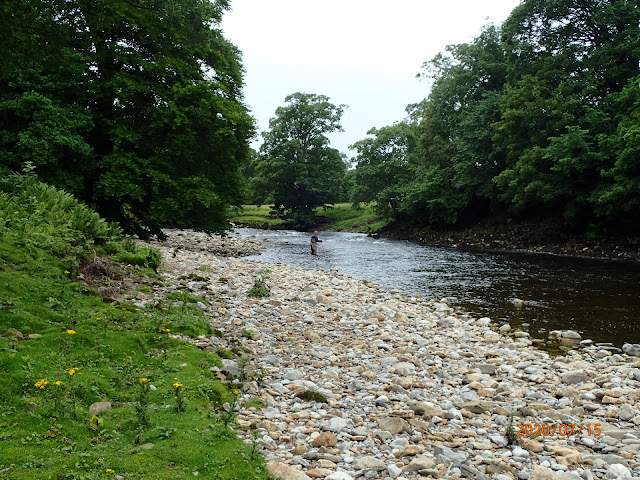 The river was at a reasonable summer level,  and was running that nice colour which can either be said to resemble cold tea or a fine Yorkshire beer depending on how you like to describe it.

For once this yours truly pictured mid stream and rather smartly photographed which would indicate that the casting style is somewhere near decent ,  Also perhaps confirming that photos can be very misleading . 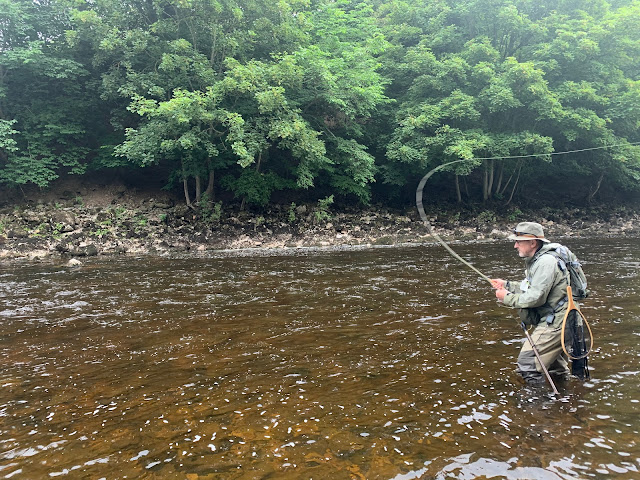 The Ure is a largish freestone river famous for its trout and Grayling , it is one of the birthplaces of Spider ( Soft hackle ) fishing ,  It is also infamous for its ability to rise with terrifying speed should heavy rain fall at the head of the valley. On the day I shared the day with a good friend who made the journey over there at the same time ,  As far as the fishing went the least said the better the highlight of the day was in the end the scenery and the sound of curlews , My Companion had the better of it , My tally was a few small brownies most came in the last hour or two of a long day .  My companion had both a a decent trout and a nice Grayling as well as other bits ,  On Friday it was a different story the fish gods shone on me . aided by some canny guiding this was the result. 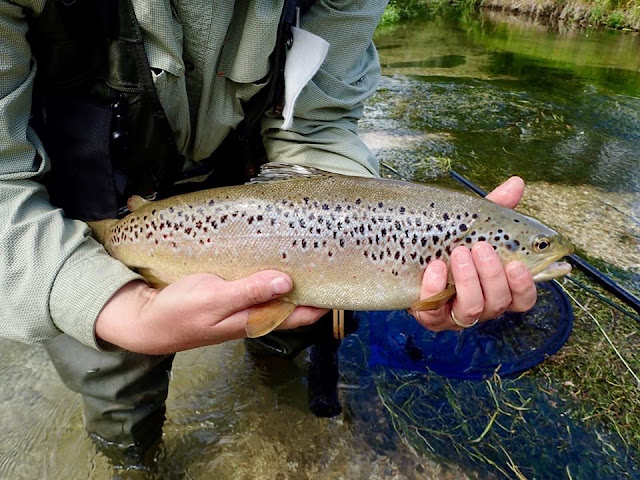 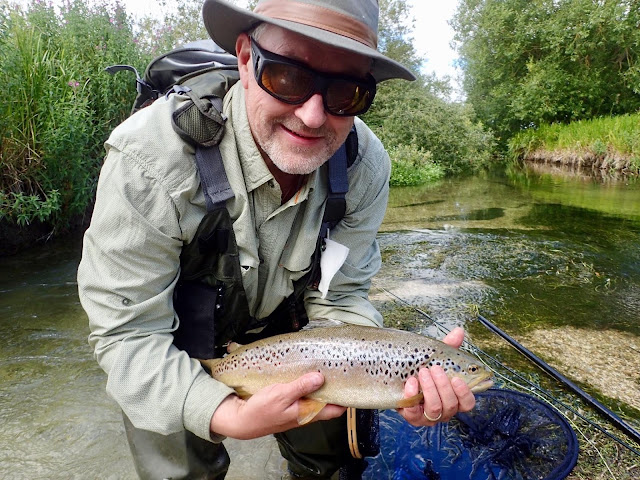 This next  picture gives an idea of both the size and the extraordinary clarity of the stream . 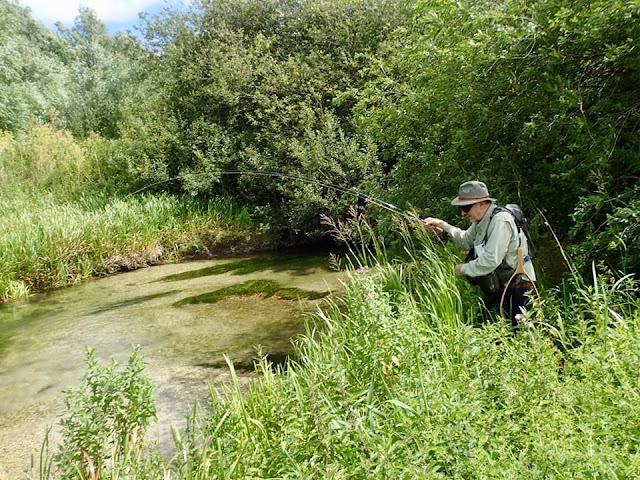 Fridays trip ending up being a totally different day ,  the day was blessed on a number of counts ,  the weather was kind , the Wolds streams can be a trifle windy ,  Or more accurately a gentle summers breeze down at sea level at my home can turn into a wind that bends trees over up on the wolds .  The fish were there in profusion and for a change Lady Luck was smiling on me .  But more importantly my host as well as being a damm fine angler is extremely knowledgable about the stream.   I was guided skilfully to where the hotspots were .  Fish of prodigious proportions were there to be seen .  Even accompanied by a native guide many were spooked . 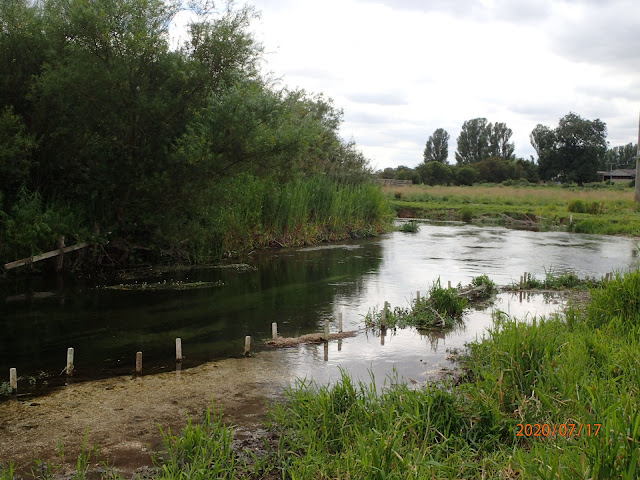 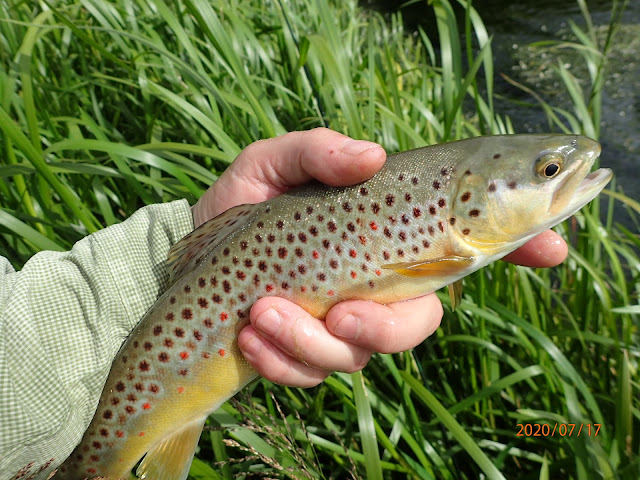 My first five minutes casting was rubbish ,  well more rubbish than my usual casting is ,  but after that I improved from awful to passable and settled into the day .  In the end I managed a good few fish the best two were carefully weighed at 3lb 3 oz and 2lb 12oz. The 2lb 12 was a stunning fish but avoided the camera , after been carefully weighed in the net as I went to hold it up a last thrash of the tail sent it sailing back into the river .  ah well such is life.  It was in the end a stunning day finished of by the last half an hour trying to tempt some large resident chub and Grayling a in a large deep pool.  The late afternoon sunshine beating down on our back was the signal that the day was done .  A memorable day with great company.
Posted by Becks and Brown Trout at 06:18

Justin
What impresses me about those streams you fish there is the easy access to the banks to cast without experiencing hangups. Another thing that got my attention on this outing was the quality trout you landed. Thanks for sharing

trust me there are plenty of difficult ( impossible ) places to get access too.

My kind of stream to fish simply because of the easy access, beautiful area, and stream. Thanks for sharing