Well the season has started pretty much as I feared …. Badly . The biting easterly wind has not stopped all week . The water is bleeding cold and over two short trips the only fish that I have got to the net are a few ever willing Grayling.  I managed to hook two small trout but released both at distance.As it says in the books the LDO have appeared during my visits hatching promply at two thirty, the only problem was the fish aren’t reading the books and I appeared to be the only one that noticed them.  I have only seen one rising fish. Simply put , as yet the fish are not looking up.  On a brighter note the rivers look stunning as clear as I have ever seen them. At good levels and looking good for some warm weather.

I did have a short chat with a guy enjoying his first ever trip on the rivers.  Well enjoying was probably the wrong word.  He was struggling with the breeze and his new gear. He was struggling for a few reasons. Firstly his new three weight rod which was a fastish action job. In the “breeze” the three weight line was hard to control and he did say he was going to get a four weight line for it. 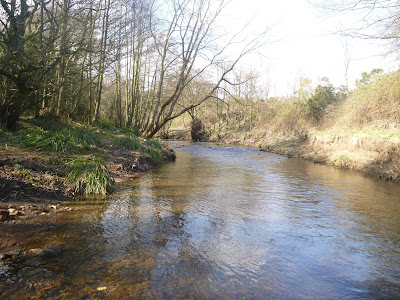 Apparently the shop he bought it from had said he may need to over line the rod. Now to me habitually over lining is nonsense.  Surely you decide what line weight you want to use and buy a rod that will fish it at the ranges you want.  As for three weights , well yes on their day for dries they are great fun but as an all round fishing rod give me a four weight any day.

Whilst we were chewing the fat he commented on my “old fashioned “waders.  A fine pair of PVC Ocean chesties. They form my Spring and Autumn wardrobe, I have breathables for summer and Neoprene for silly season fishing.  Now I cant understand why so few people wear them now. Tough / comfy / warm and getting in and out of them isn’t like the 20minute aerobics session neoprenes put me through.  Sartorial elegance they aint but they are blackthorn proof and great for sliding down banks on your arse.  But the clincher is I looked a lot warmer than he did after standing in that river for half an hour.  It doesn’t matter how dapper you look if you aint comfy you aint going to concentrate……..

Posted by Becks and Brown Trout at 14:02

So much for that Pennsylvania fur ball and his early spring. Hang in there Andy, the warm is coming.