Sunday was the first day the temperature reached the dizzy heights of double figures,  10 deg to be precise .  I had the opportunity to escape to the local stream.  So with the hope of rising fish I ventured forth.The river is still in its winter guise.  There is no sign of green other than the snowdrops and the first shoots of wild garlic. 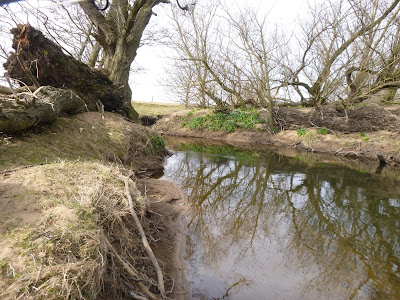 As I walked through the farmyard the bleating of sheep and lambs reminded me it is spring. The sheep are all in the process of lambing and have been brought in to the sheds for protection.  Whilst chatting to the farmer and his wife they thought it was the latest spring in living memory. Everything was at least a month behind. 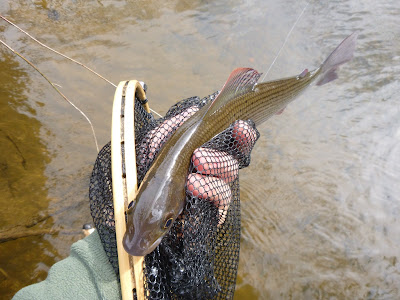 For two or three hours over lunchtime it felt like a spring day should feel.  Entering the stream the sunshine was just doing enough to persuade trickles of Olives to emerge and come sailing down.  I was enjoying the feel of sunshine when I spotted the first rise.  The next two hours brought seven fish to surface flies  all out of season grayling though.  All released quickly.   Not one trout put in an appearance .  Every time I spotted a rising fish I hoped that the culprit would be a brownie but as yet they are still laying doggo.

It was great to see hatching flies. It was wonderful to cast at rising fish in sunshine and to feel the bend of a rod and the pulse of a fish.  At last I feel the season is underway all I need is for the brownies to wake up and join in...

Posted by Becks and Brown Trout at 09:58

Sounds like we are in the same weather pattern on this side as well with a late spring and cold winds but things are starting to turn here and I am sure they will for you too!