May this year so far  has a been an odd sort of month, before that March and April were mild and dry, drier than an April and May in Yorkshire have the right to be.  May started well enough but the last week has been full of howling winds and rain , and yet in all that the mayfly have started to hatch early this year,  I say early because up here in Yorkshire the Mayfly should really be called the June fly as so often its in that month that they really hatch.  As i type this its blowing I can see branches flying past the window and the last of the wisteria blooms are spread like confetti across the garden.  May? it feels more like November.  It just looks like summer .  Today it doesnt feel like it. 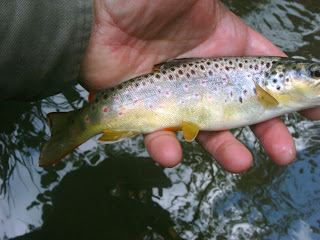 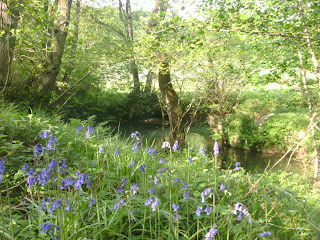 This month so far there have been a few trips memorable only as an anti climax.  Normally April shows a steady warming and in May the river really takes of, but this year in April the rivers were fishing beautifully but now we are faced with cold winds and stinging showers and becks that are already down to their bones.  A recent trip showed the Mayflies are hatching and the fish are taking them but yet with the low water and cold air things seem strangely distorted 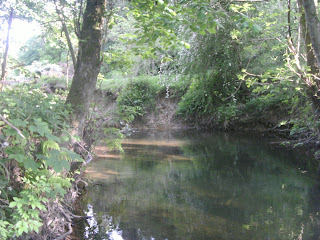 The beck here is barely 9ft from bank to bank testing your casting skills , a pool here can be the size of a coffee table and the beck can go from 6inches deep to six feet deep in a couple of strides. 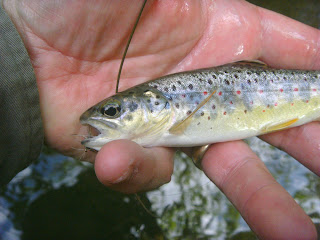 
These beck fish are beautifully coloured but a 1 pound fish here is a monster.The fish here are delightful small and feisty free rising but very timid. A careless footfall can not be tolerated here, When you do catch them the colours are superb, truly jewelled fishes as that lovely book names them. ﻿﻿This trip was a puzzle the fish in one pool would be taking mayfly and yet 50 yds away the fish wouldnt touch them but would be taking beetle patterns,  The 4 hours I spent resulted in many fish and the succesful flies varied pool to pool and included greenwells glory, mayflies, erics beetle and hawthorn patterns in fact almost half a summers patterns all in one trip.  Truly a mixed up season. 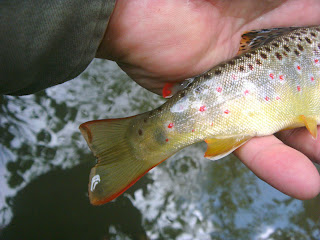 
I have fished as often as work and family allowed there has been a work party to attend and tree clearance to carry out.  It was great to see fish rising in a stretch of beck that last year seemed dead, choked by a lack of sunshine but last years work is now paying dividends.  The feeled trees are used to form features and bank protection . There are miles to clear it is some task.
﻿﻿
Lets hope these winds let up and those balmy summer evenings arrive soon , The evening rise is a truly special event lets hope that warm evenings arrive soon.
﻿﻿﻿﻿
Posted by Becks and Brown Trout at 22:07

I feel your pain..the whole month of May here in Maine has been a total washout..

may hasnt been a wash out , but it just seems that the seasons are becoming increasingly mixed up..

Been tough down here Andy. Very low water and very windy too. Quite a few mayfly about but the trout haven't really switched on to them yet

I agree, the seasons do seemed to be mixed up a little bit (at least in Colorado)...

It is one of my favourite becks and Peter It is where you were going to fish with me last year. Maybe this year we can get that trip...