So that was flaming June was it ?


Well so much for the expression "flaming June" , June was cold, breezy and harder going than It was in my day dreams when I was tying flies in the depth of last winter.  After a dry winter which meant that the rivers awoke in the spring to low water flows and cold temperatures. The rivers pantries continued to be strangely out of balance, on my local beck my last kick samples showed an almost complete lack of baetis nymphs with other species down as well. All the rivers I fish have had fewer fish rising and the Mayfly hatch just didnt .. Not that Ive had no success its just been odd.  Fish seemed to be ignoring the upwings that were hatching whilst small midge patterns were taken happily

In the winter its all dreams and hopes for the year ahead, then as the spring and summer pass it constantly amazes me how each year the fishing differs .  The chalkstream started the year very low due to the dry winter and now the weed growth is making fishing difficult.  Fish have generally seemed reluctant to rise. 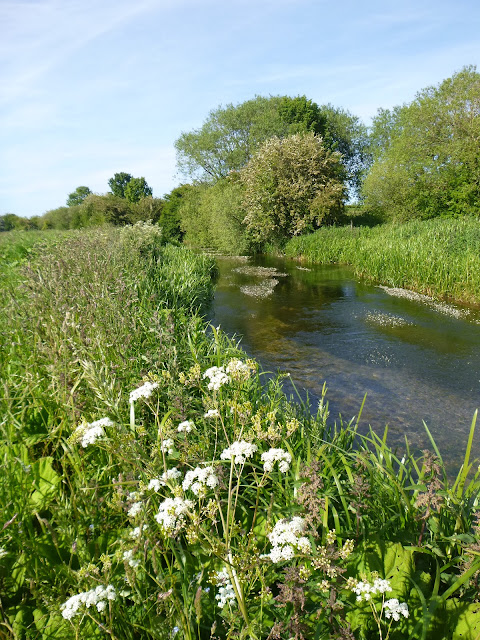 The fish are still there to be caught though.  The smaller fish coming to the surface eagerly this one snatched the fly away from a very big fish that I was targeting . Always nice to catch but I cant say I was pleased at the time though.  I had spent quite a few minutes watching the biggie , then spent ten minutes getting into position . The fly alighting perfectly a few feet upstream of the biggie and this little devil shot out from under a weed bed and took it . The biggie of course melted away. 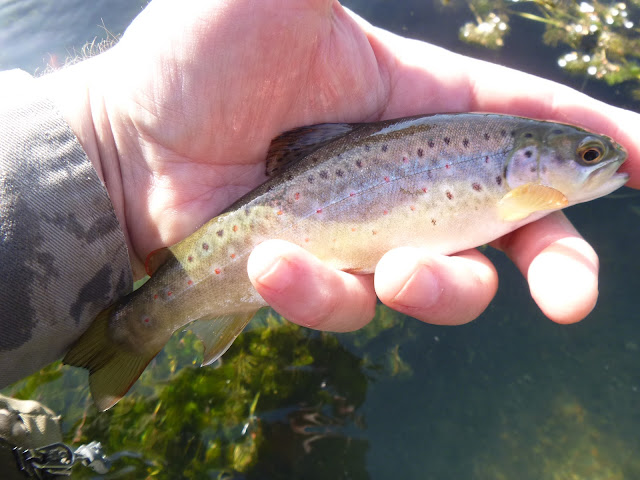 At water level you get a different perspective .  Unlike many chalk streams wading is allowed although it isnt always productive.  The trout are very very spooky and there are some real good fish in here , many in the 2 to 3lb class but they are all pretty wary. 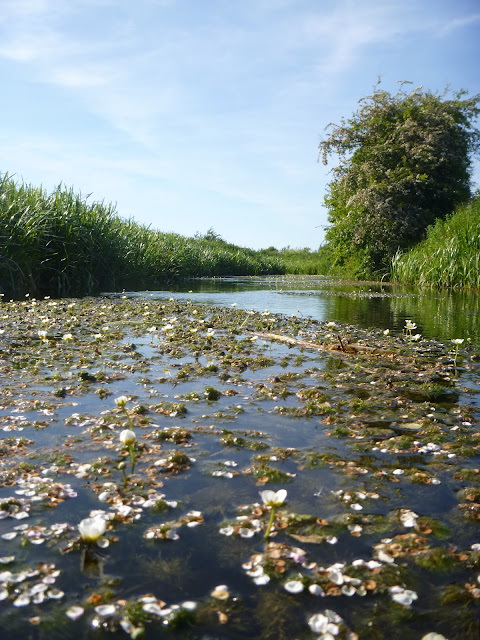 My best fish that day was this lovely little wild fish , the big fish didnt want to cooperate  . Low water bright skies meant for tricky fishing. But it was a pleasure to be out sharing the river with kingfishers, Barn owls and Buzzards. 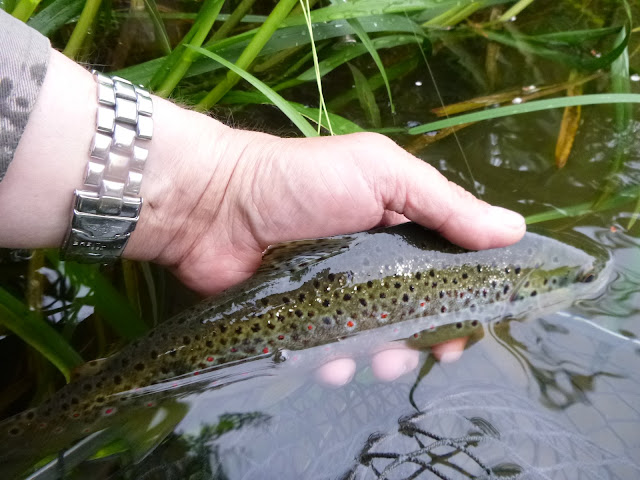 One benefit of the time of year is the long evenings . One recent evening I pottered down to the Derwent and headed of downstream. With the intention of fishing back up. I got as far as the mowthorpe sluice this is now technically the start of Scalby beck ( the beck that features so often on my blog)  or to be absolutely correct the sea cut, an artificial channel which was created in 1804 to alleviate flooding in the Derwent valley by diverting high water away down the scalby beck .  The Derwent is unusual in that although at this point its only a few miles from the sea it now heads inland and enters the Ouse many miles inland below York.  Before meeting the sea in the Humber estuary. 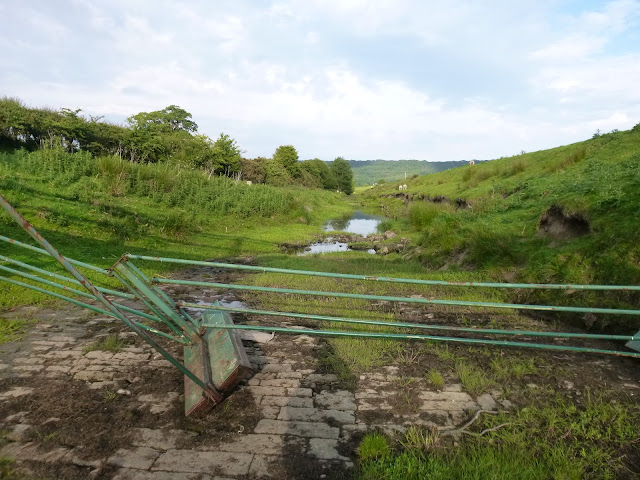 As these two photos show the low water levels mean that the sea cut is completely dry . Scalby beck doesnt really start flowing until a few miles down where feeder streams join it. 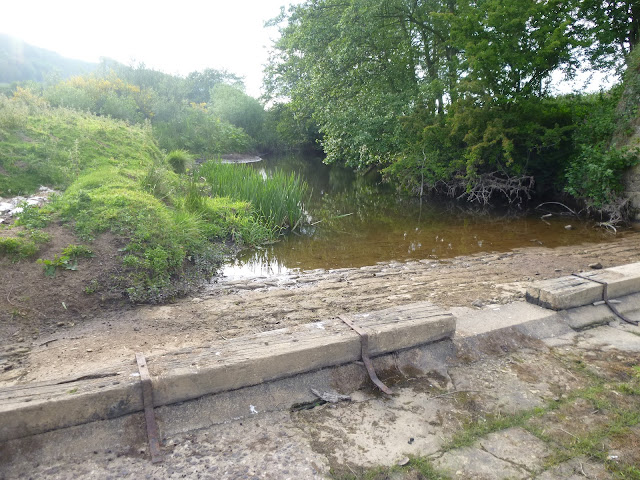 That evening we had a decent evening rise in fact I would say the best evening rise of the summer so far with about a dozen fish falling to a size 16 IOBO humpy in the space of 45 minutes.  All sorts was hatching , sedges . olives and even an odd mayfly in among the countless midges. 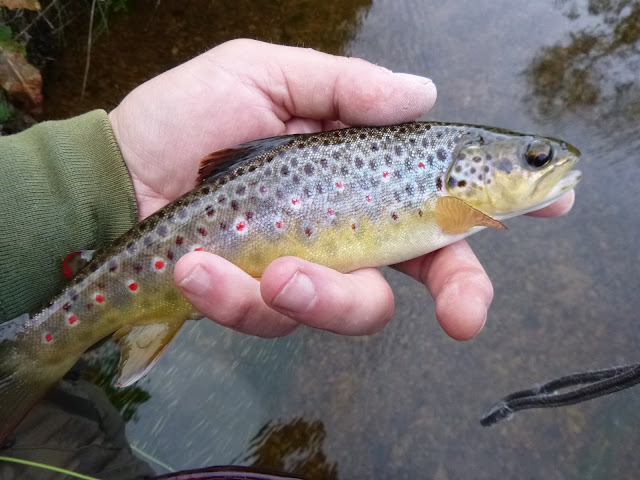 These pretty little wildies are great fun and although the river is well stocked with additional brownies and rainbows . Fishing dry fly I didnt see one stockie in the 15 or so fish I caught.  The fish were in the shallow heads of pools enjoying the evening cool and the faster flows. The stockies I think were sulking in the few deeper areas.  It certainly shows one benefit of wild fish with there apparent willingness to feed in low water conditions.  I dare say a big goldhead tossed in to the deeper pools would have found a stock fish or two but why? .  To me its not what fishing is about. 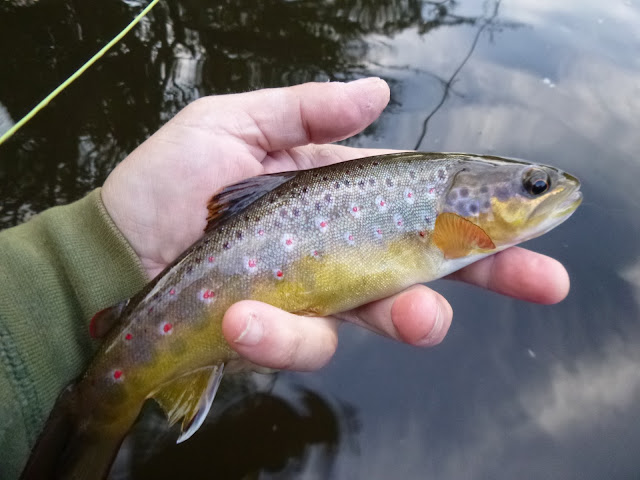 Posted by Becks and Brown Trout at 11:06

Andy looks like your streams could benefit from a very wet streak.
The browns are indeed beautiful.