I stole a few hours on Sunday afternoon.   It was one of those days that when looked at through the windows it looks like summer is here ,  but when you step outside you realise that the wind is cold enough to cut you in two. But  It was a beautiful day in a chilly sort of way.  Also the wind that was blowing down the valley was of course always in your face  making casting interesting. 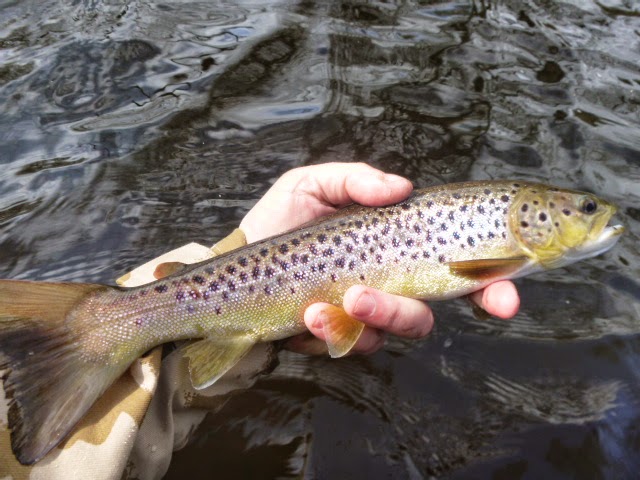 I arrived and put on all available clothing and ventured forth ,  the wind was whipping up a fair wave on the longer pools and spotting rising fish wasnt going to be easy . Assuming of course that any would be looking up.  Anyway I decided that as I hadnt fished this stretch of water for 20 years I decided that a walk along the bank would be a good refresher as well as warming me up. 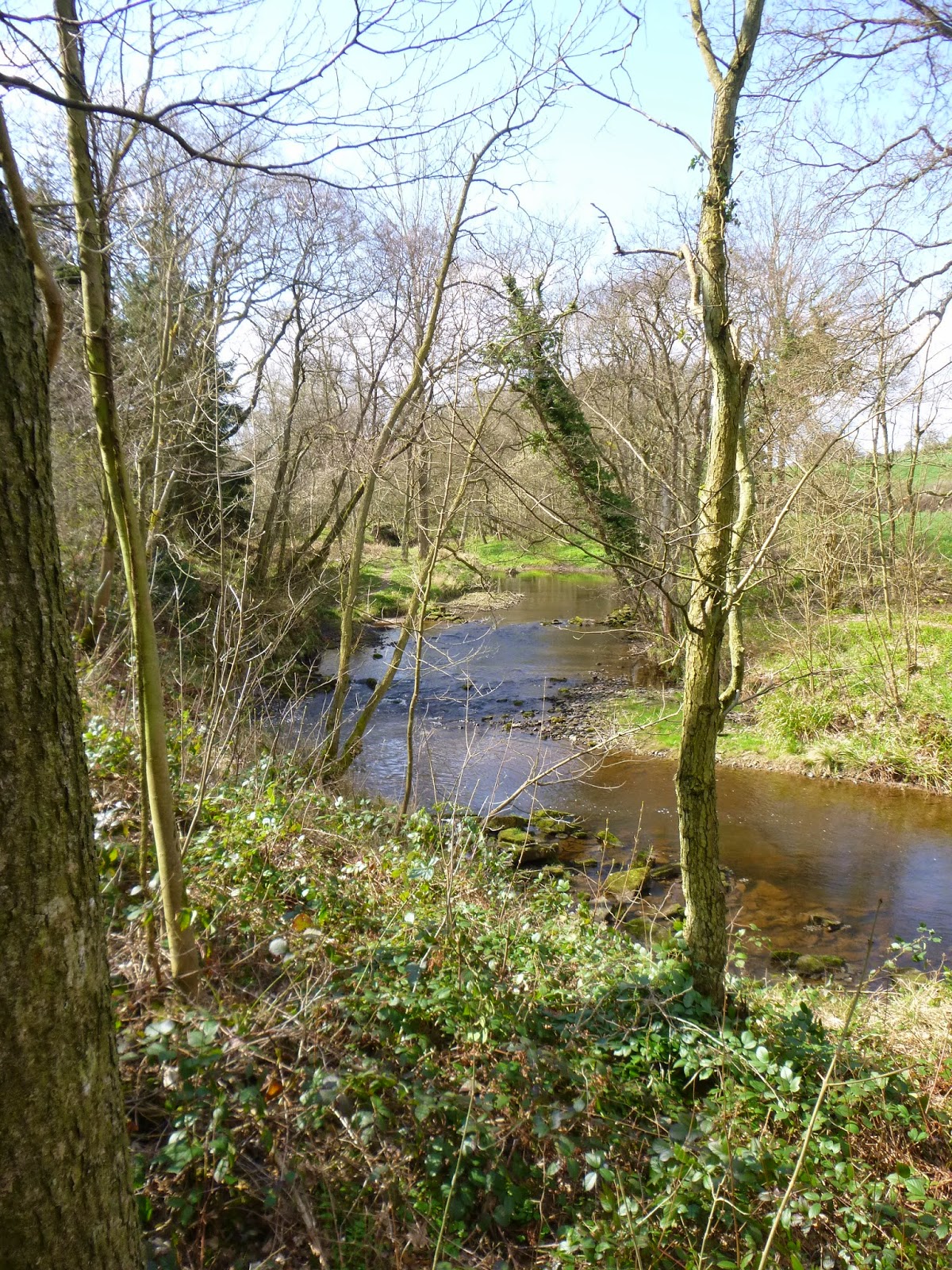 The countryside is just starting to really get going now, all the spring flowers are in full bloom.  Trees are all coming into leaf and wildlife seems to be waking up everywhere. 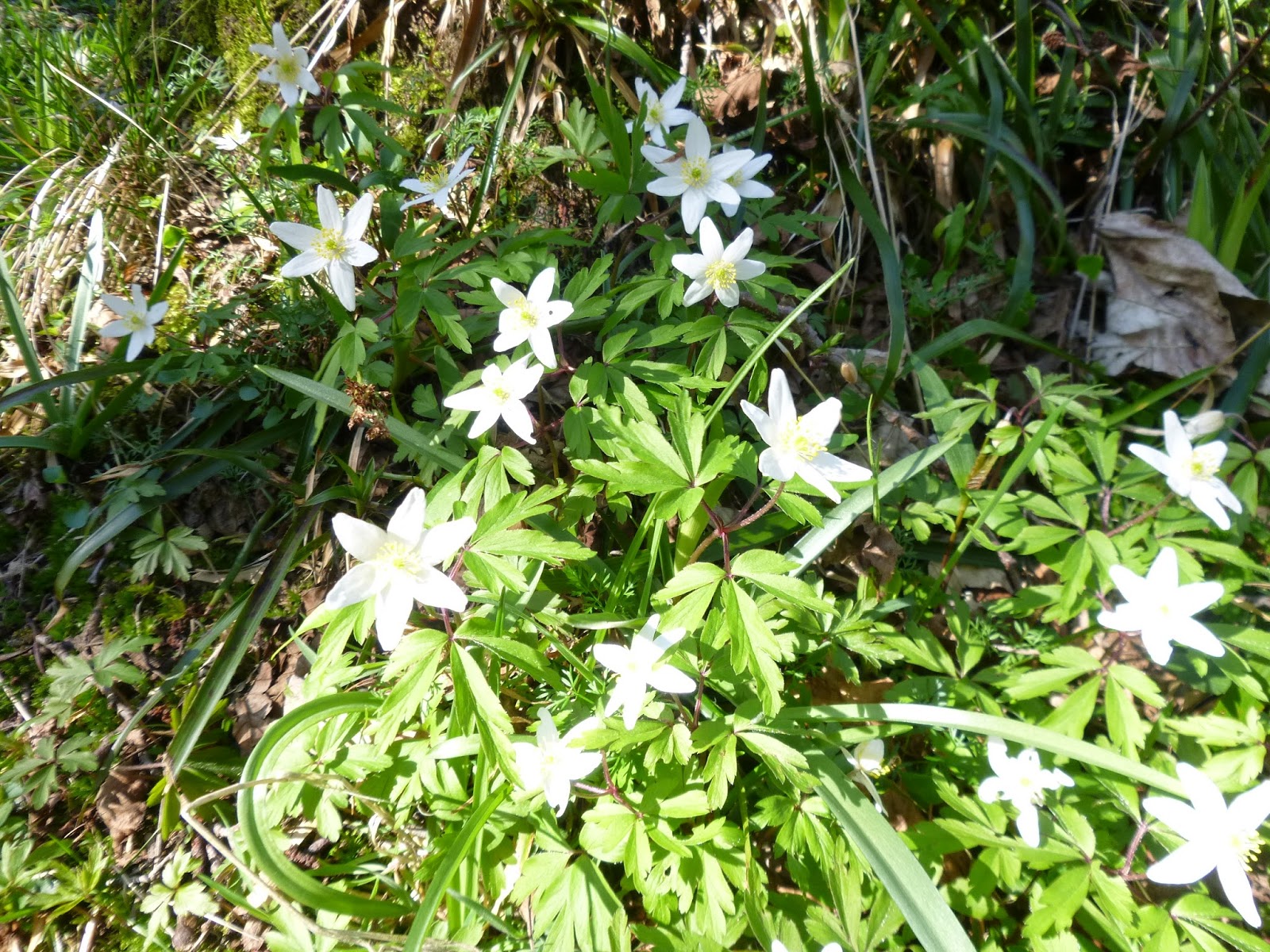 After wandering around for an hour or two with just a couple of fish to show which were gleaned with a nymph from various runs.  I headed back to my car for a drink and the possibility of heading of downstream. 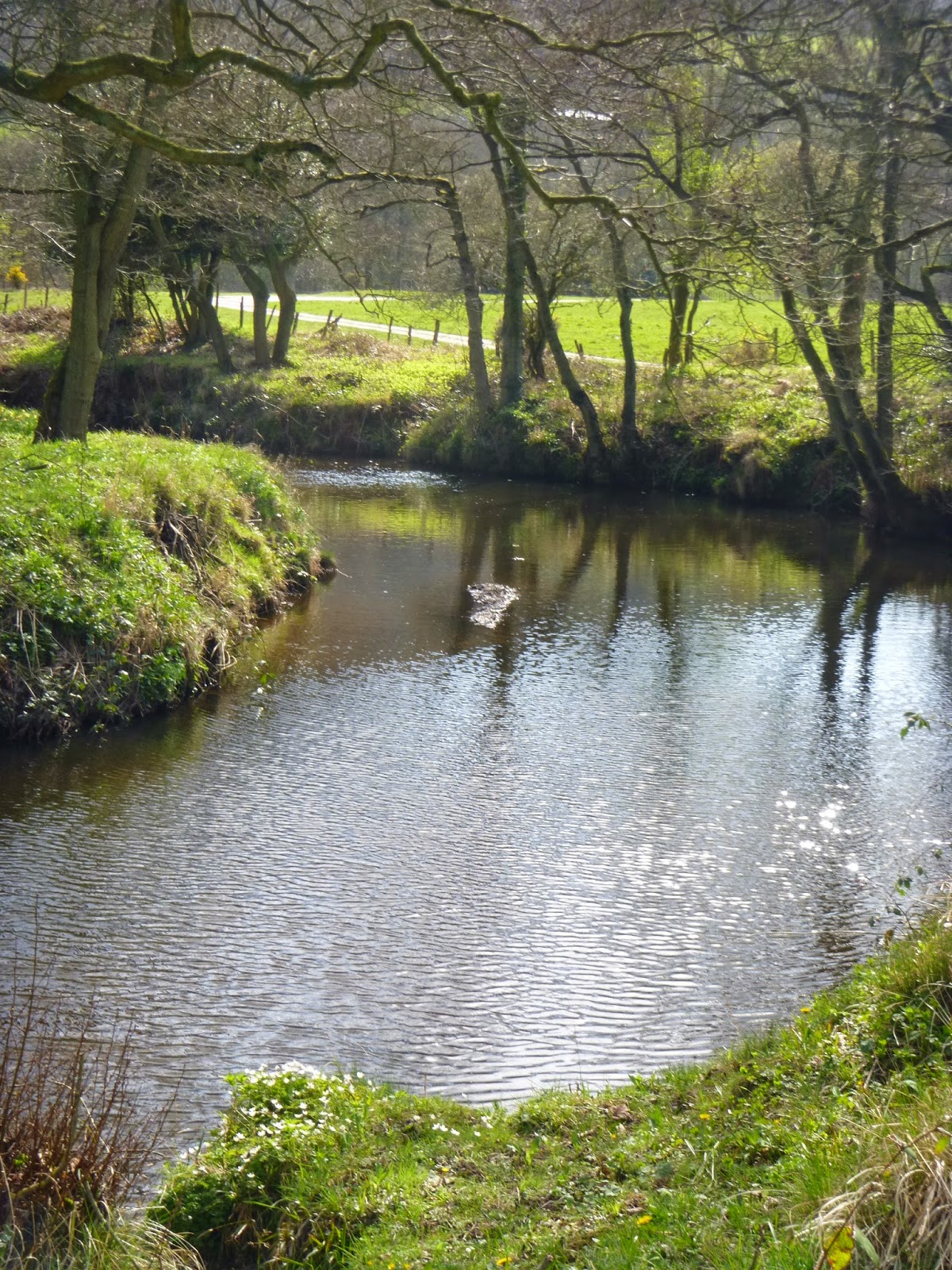 This long pool was the view from the car.  Whilst I was stood watching I thought I saw a solitary rise.  Very tight to the bank , but it could have been a wave hitting bankside vegetation .   I continued to study the area and as the wind rose in strength again there seemed to be another splash tight against the bank.  The area was the small patch of water around the tiny island of debris and leaves on the inside of the bend in the picture above.  At first I dismissed the possibility of rising fish as when the wind dropped for a minute or two there was nothing to see in the calmer water.  But then as the wind picked up I was teased with the same possibility.  Eventually I got in and worked my way upstream to where the shadow on the river is on the opposite bank in the photo. When I was there I realised that the when the wind did pick up it was blowing stonefly of the little island and the fish were mopping them up .   I ended up with four the larger fish with the outsize paddle tail which looked like an overwintered stocky  and several smaller wildies . 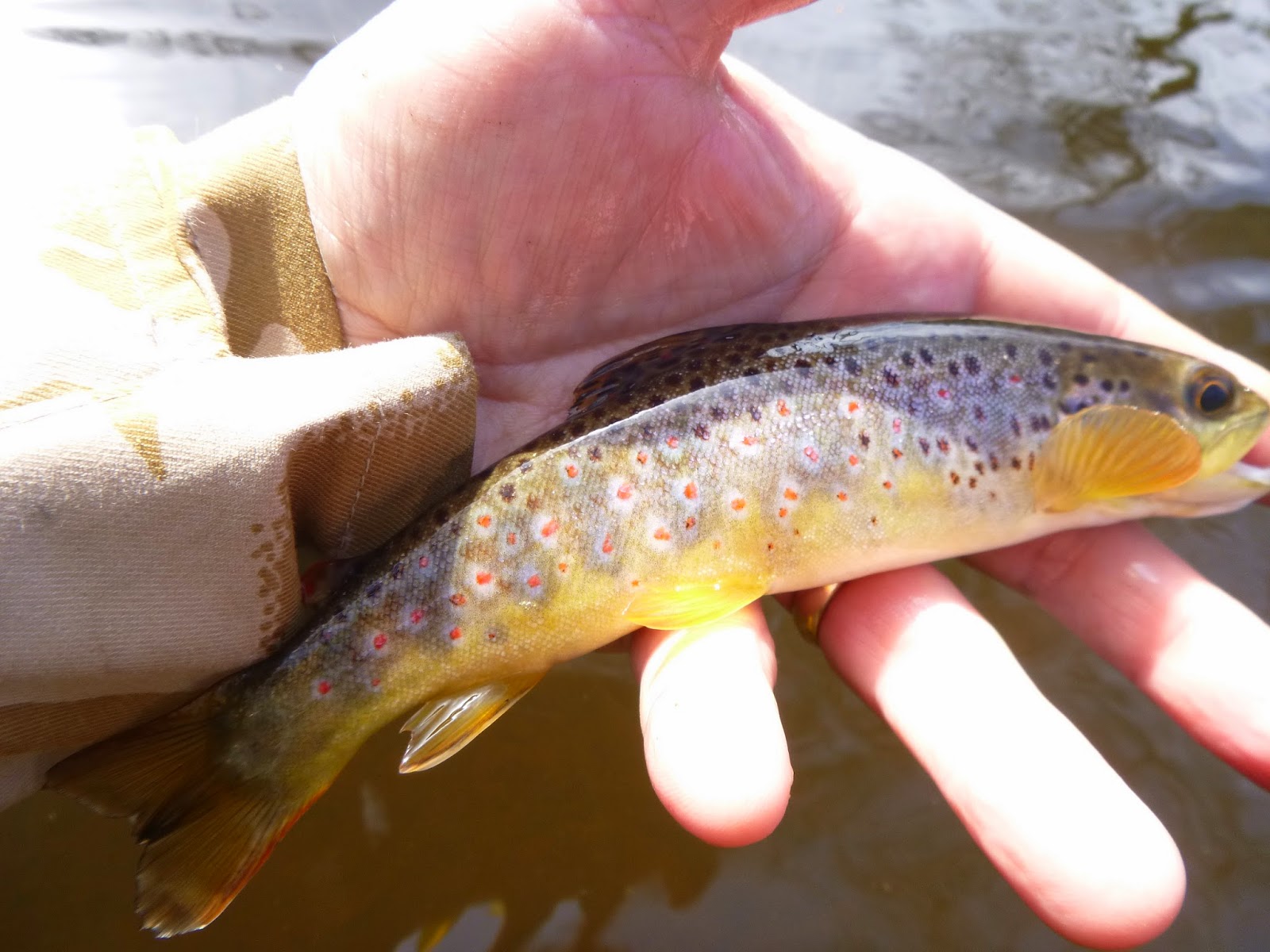 By the time  I had caught them four I had put down all further activity so I had a wade upstream to the little exposed bank of debris.  It was as can be seen below, as well as many stoneflies there were a few olives .   How easily  I could have missed this little pocket of hatching bugs. They were the only hatching flies I saw on the day .  It just gos to show how isolated these small pockets of activity can be. 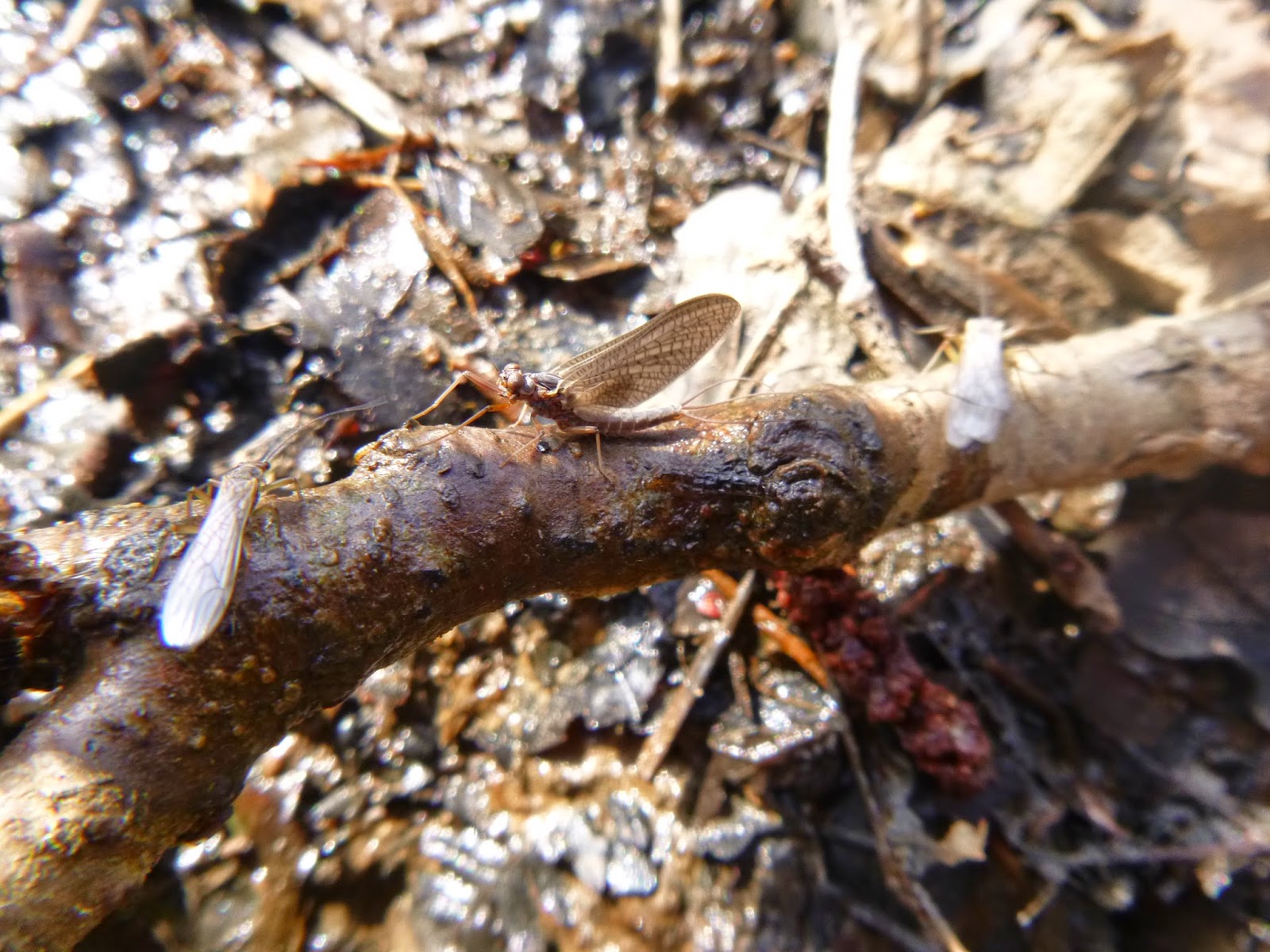 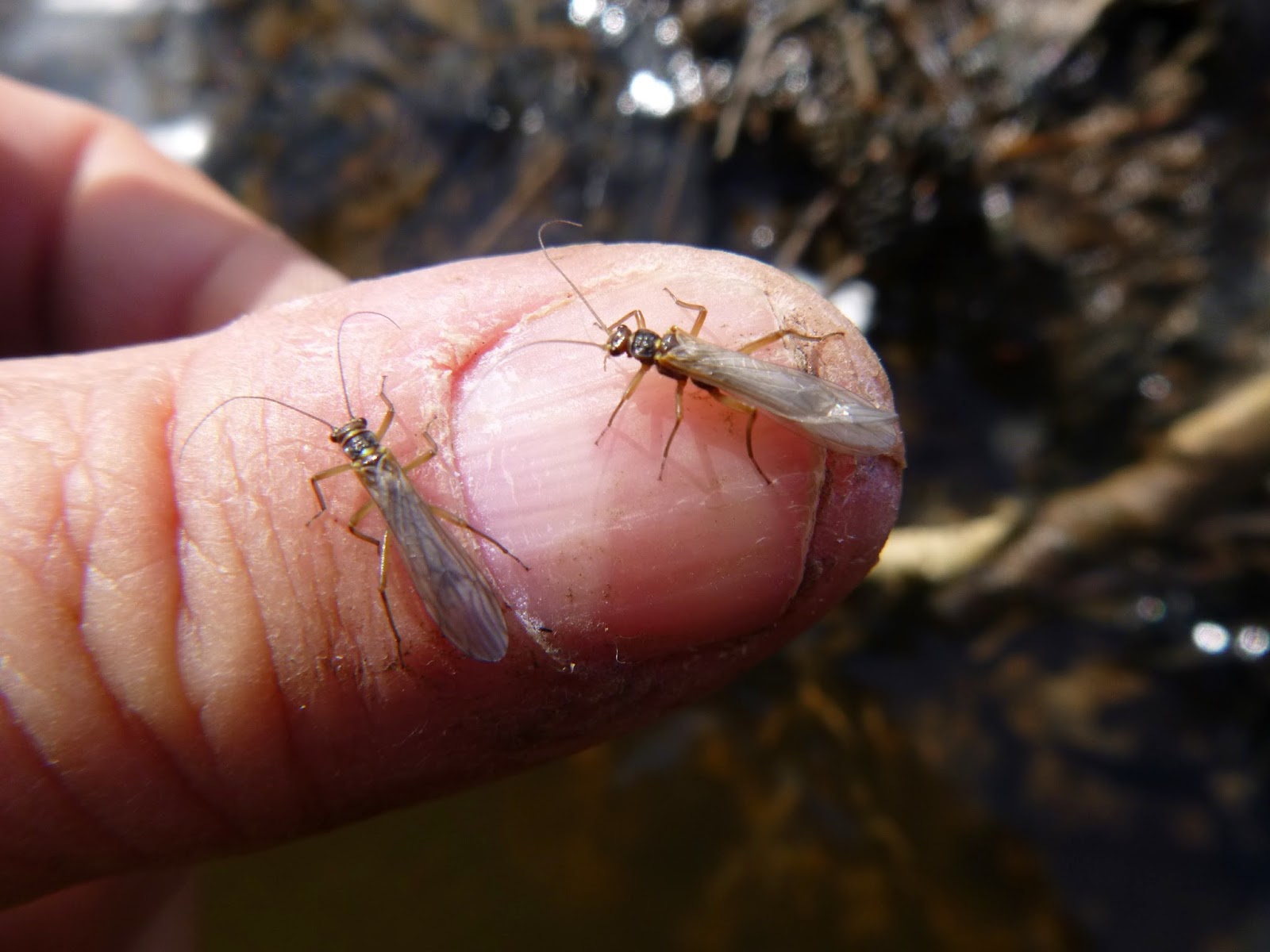 Posted by Becks and Brown Trout at 12:28

Nice job being observant and rewarded for your efforts! That really is some tail on the first brown. We are still waiting for the fish to start noticing activity on the surface but the tide is changing

I know the feeling Andy, looks great outside until you get outside, seems rude to have to put a thick coat on.