Of Grayling and Cherry blossom

Boxng day, I was given a unexpected chance to go to the river I arrived a little after twelve,  probably around an hour or more too late to make the most of the day  but getting your daughter organised for a weeks skiing trip and sorting out the other tasks allocated to me stole precious hours. The small stream was in fine form , fining down after a rise over the last few days but now running clear and slightly up on the last few weeks low levels. The river surface was dead though, no rising fish the pretence of summer seemingly gone.  Temperatures hovering around the 3 degree mark.  I fished a single nymph fished on a 8ft 3lb leader on a 3wt rod.  Searching the glides and runs for feeding fish. 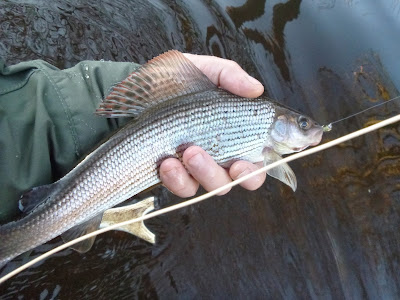 This was the first fish and proved to be the best of the day a few more tiny grayling and several small brownies came in the next two hours but there was nothing of note only small grayling pristine  in their steel grey chain mail coats .  Along with the grayling were a good few out of season brown trout still obviousley feeding . I guess the lack of seriously cold weather has allowed them to stay so active. 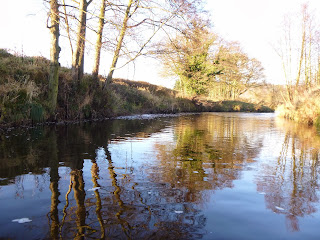 As I walked back to the car a flash of colour caught my eye. The autumn mild weather has fooled a cherry tree to share its blossom.  Another sign of what this strange weather has done .  In the last week I have seen the buds on willow and horse chestnut swelling and bursting and catkins appearing.When real winter weather appears these will receive a real shock. 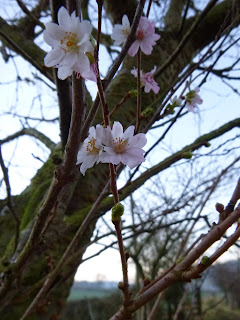 Posted by Becks and Brown Trout at 22:27

At least you got to fish before the temperature totally dropped. It might’ve been the strange weather, but it’s nice to see such a rare sight of cherry blossoms in the autumn season. Here’s to holding up until the weather gets warmer.