I have visited rivers a few times in the last couple of weeks.  A couple of weekday evenings and a few hours on the Yorkshire Derwent on fathers day courtesy of another guest ticket.  The trips have all been good but of course to varying degrees .  I met a good few other anglers out and about,  we discussed the weather the rivers and as usual at this time of year the mayfly.  How would the hatch develop? would it be good or sparse after all there never can be a bad hatch. Just as my grandad said to me as a teenager theres no such thing as bad beer son just better beer. Its worth mentioning that here in Yorkshire we can have splendid mayfly hatches but generally in June.... 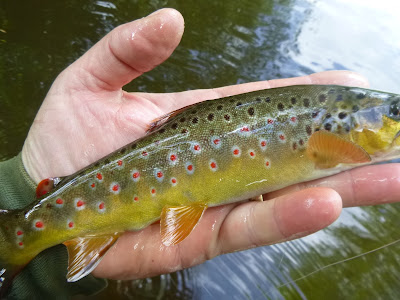 One thing that occurred to me after chatting to several brothers of the angle was how varied their perception was in assessing the success of their day.  The Blue trout below whilst scrapping like the very devil seemed to me to be dreadfully out of place in a small pretty stream .  It actually launched itself at my dry fly as I lifted it of for a recast.  It then proceeded to cartwheel down the pool like a runaway.  Personally I am not impressed with them  but shortly afterwards I met an angler who praised them highly and particularly there readiness to take.  I guess as the old saying goes you can please some of the people some of the time but.... The highlight for me was the fish. above Not the largest or the hardest fighting but the colours were amazing the picture just doesnt do it justice. 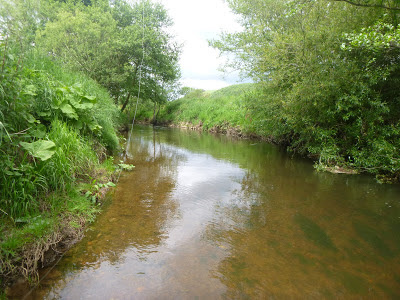 This type of stream really ticks the box for me . This is all close combat and stuff and great fun.  Stealth is required and its amazing just how close you can get to the fish without spooking them.  When I fish in places like this I can see why people use tenkara . 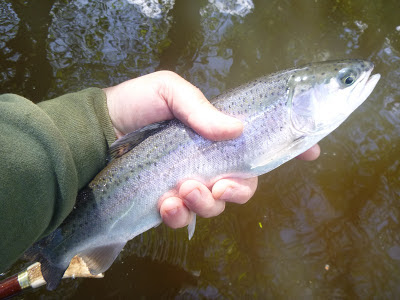 Of these two fish I know which gave me most pleasure in the capture.... I fished for a few hours on fathers day .  I caught a lot of Brownies I reckon around twenty all to the dry fly.  Many tiny like the one below but all as perfect as you could imagine.  The river also seemed to have  many stockies . I was told at the end of my session that they hadnt been in long,  in a couple of places you could see them swimming round like lost tourists. I am sure that should you have wished you could have dozens of them with a bead head ,  by the way the only fish that were rising were the native brownies. 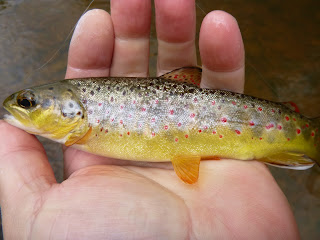 A few days ago on another stream this well conditioned stockie led me a merry dance it took the dry mayfly with a lovely head and tail rise then after that getting it into the net was fun.  It lead me a merry dance it managed to swim right around me and lassoo me with my own line .  I must be getting old  and why do they always look smaller when you are still playing them and only realise how big they are when you draw them towards the net?.  Although a nice fish though give a pretty wild fish any day . 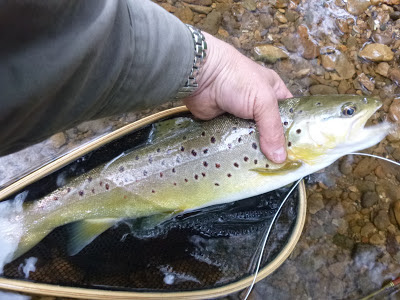 Posted by Becks and Brown Trout at 21:41