A Day on the Dove..Should have been the monnow....

Those of you familiar with the film groundhog day will understand how this last few days went.   For the last three years I have been trying to get a couple of days away with Peter ( he of walks and fishes blog ) to fish the Monnow.  But with a now tiresome regularity once again the rain gods have conspired against us .  The trip was written of.   I had booked two days leave and decided that I would still take them. The rain had affected all my local rivers but the Ure which is a fair distance inland remained in fine fettle, and so Friday saw me on the bank there.  It was a decent trip with a good few fish landed but nothing worth reporting here.
By Sunday I figured the water levels would have dropped enough to have a trip to the Dove and so... 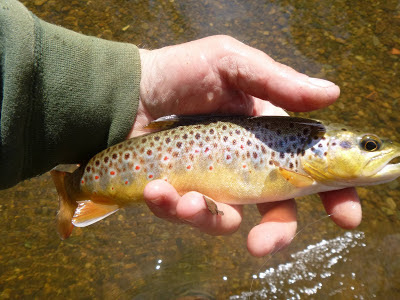 The Dove is a totally different river , small very varied and pretty challenging with plenty of cover and woody debris galore.   I decided that Sunday was the day I would give it a whirl. 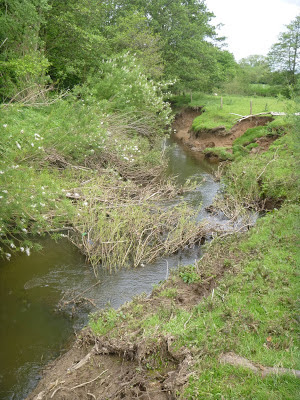 By Sunday the EA website was telling me levels had dropped a long way from the mid week high of about 4ft of flood water .  When I arrived the water was still carrying colour and was not as I had hoped. 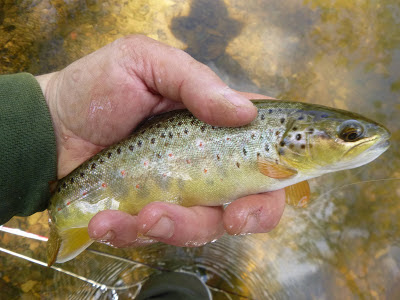 About 11.30 AM I started fishing there was little sign of surface activity and my earlier optimism took a bit of a dent,   but I had my first fish after spotting it rising tight under the bank and for a hour or so things were slow.  Around 1.30 pm things seemed to change . A small rise in temp signalled a bit more surface activity and fish came pretty regularly then for about 90 minutes.  There were clouds of very small sedges and a few olives and hawthorns but the fly that worked was a size 20 adams. 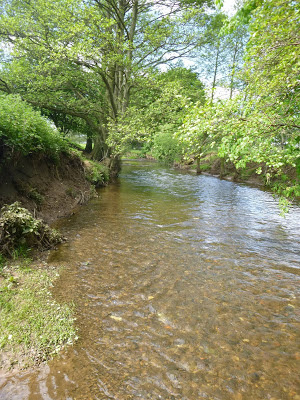 The top end of the fishery has more gravel beds and the water always seem to run cleaner.  Its a lovely little stream . 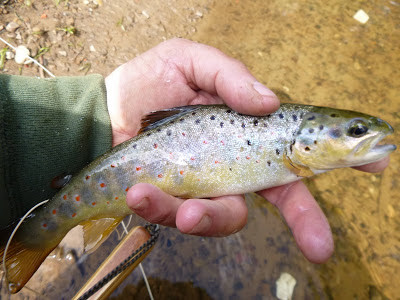 The fish came from the tails of pools and were usually tight under cover .  The fish above came from right under the bushes shown below. The cast was short perhaps 15 ft but it had to be an across the body sort of roll cast  to get the fly as tight underneath as possible.  The full flex of the little Hardy featherweight is perfect here it will cast with virtually no fly line extended. 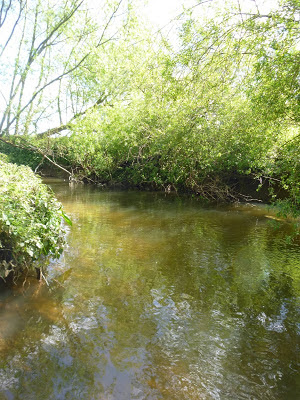 The fish were all of a nice size and put a nice bend in the little rod. 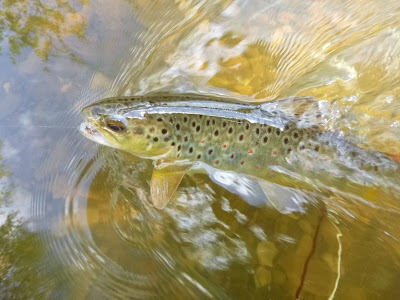 Wading on these small streams has to be ultra cautious , very slow and very quiet.  You have to fish your way upstream.  Once I am position I usually just stay still for a few minutes , Check the fly and tippet and check behind for your back cast.  I think this pause is essential  so often once in position another fish will show itself. 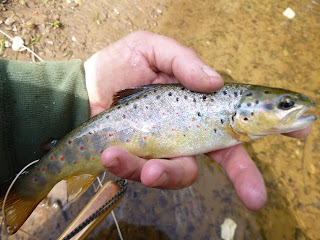 Three fish came from under the tree below.  All cast to and quickly hussled downstream and played out in the shallow water . Then I rested the swim for 5 mins before re casting all in about a 8ft long stretch of water, . I was pleased with myself to manage to get three from there. 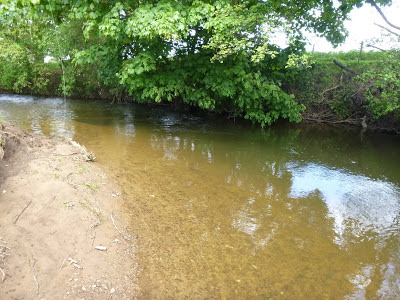 I ended the session with perhaps 12 fish  in about four hours , with most coming in the last two.  An enjoyable day .  But one day I will get to the monnow.....

Posted by Becks and Brown Trout at 21:56

Nice little stretch. is this the Derbyshire/Staffordshire Dove? I don't recognise it from the photographs.

It is the Dove in North yorkshire.....

We WILL get to the Monnow mate! Mind you, the Yorkshire Dove is a fine consolation prize

Great post. I am always struck by how similar your rivers look to the Umgeni and other streams here in South Africa, and it makes me realise why the Englishmen of 120 years ago saw to stock them with Trout.