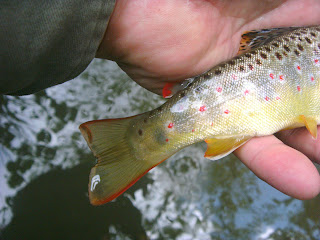 Posted by Becks and Brown Trout at 21:54

That's a farmer to treasure as is that wild brown trout in your photograph. What exquisite markings! Your last seven words of this post are filled with significance...

As ever Andy you've an astonishing way with words... I don't comment as much as I should but I read your your blog with interest with each and every update. It's almost like being stood beside you taking in the atmosphere and surroundings...