What changes for the river

I went for a walk down by my local beck a few days ago and I got to thinking how the fauna of this part of the world has changed so much in the last half century,  I have lived hereabouts all my life.  The beck I fish now was my playground as a kid and I have seen all the changes over the last near 50 years.  I have always been bit of a bird and animal watcher and one pocket in my fishing waistcoat always carries a tiny pair of roof prism bins.... Anyway when I was out the other day I saw Grey squirrels by the gang load. I saw signs of the resident otter and several roe deer and walked by a couple of active badger setts, what I didnt see was much in the way of bird life.

Now when I was a kid I remember that the woods around here didnt hold a single squirrel nor did they have any deer and badgers were a real rarity.  As for otters they were something you saw at a zoo or in books,  but the woods were full of birdlife and the little local beck side was alive with smaller finches and stuff. Now when you can see the hedgrows through the balsam and the bloody giant hogweed they seem deserted  apart from collared doves and magpies ,  even the bands of starlings so common in the past would be a welcome sight again.  In the countryside around we have buzzards in abundance and even Peregrines nesting on the castle headland but the small stuff has a tiny population compared to the past. 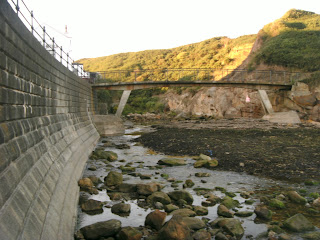 As for the beck itself well that has changed to.  I can remember seeing the banks black with the elver runs that used to come upstream in that strange annual ritual.  I could not have imagined that such super abundance could dissapear completely. In the wider picture we have signal crayfish invading and now the bloody killer shrimps.  I bet we see a lot more of those in the years to come.

We seem to continue to develop a worrying unbalanced ecology where the in vogue stuff gets supported and helped but in the process damages the rest of the system and dominant species continue to overun the rest. The ecology that had some sort of natural balance is dissapearing as fast as ever.  We hear on the news the RSPB are hailing record numbers of birds of prey.  Other bodies praise the rise in the otter population, and whilst  the birds of prey are now abundant and the Otters which are nice to see are becoming a problem in some areas.

I am not suggesting that wholesale culling should take place , but until we as a society accept that we do live in a managed enviroment and manage it properly , that is all of it not just the bit that we are been monitored and KPId on . Then it will continue to be a cock up.    In some ways we have come so far rivers now appear to be clean and the industrial pollution problems are dissapearing , Instead we have hidden dangers, fertiliser run of and the effects of hormones from the birth control pill that now get into the rivers.  Or whats left of so many after abstraction of ground water to water mono culture plants and wash more fertiliser into the rivers.

I know this was just a rant and offers no solutions but it worrys me what sort of a world we will leave for future generations and I see no sign that anyone is willing to grasp the whole bloody nettle they just want to hold on to their particuler leaf whilst the root of the plant may be dying,......

Andy
Posted by Becks and Brown Trout at 12:56

Scary that low water Andy. My trout will be swimming in gravel soon if the winter rain does not come soon?

You may think your "rant" offers no solutions but it shows that you care. Thats the first step. The second step you have also taken...your post is a warning, a call to arms, and a step in the right direction. More education for those who are unaware of the dangers is needed. The next and most important step is to act based on our best understanding of what is not only good for us and future generations but what is good for the world as a whole. There are many times I feel EXACTLY the same way as you. Keep "ranting" bring attention to what is important.

I whole-heartedly agree with your rant, Andy. It's very frustrating when people can't see the big picture, like you say...and want to save only what they care about (the cute, fuzzy or obviously amazing creatures) and forget that it takes the entire ecosystem being healthy to do this.

Those signal crayfish, with their eating up of all the cased caddis larvae, if we don't eradicate them soon will be responsible for the extinction, at least locally, of not just the cased caddis flies but of all the creatures that rely on them such as Daubenton's Bats and we will see a big drop in the numbers of dippers too...