A hard but good day on a chalkstream after grayling.

Wednesday was a day that I have anticipated for some considerable period.  The venue for the grayling expedition was Mulberry Whin on the Yorkshire wolds. It is nearly a year
since the same trip last year was cancelled due to  freezing weather which resulted in the following post.

My box of Grayling bugs and nymphs was up to scratch. From size 14s to size 20 with lead or tungsten or barely any weight at all...But would any work there magic on Thymus,,,

Well this wednesday the reorganised day arrived.  It was somewhat overshadowed by the news from one of our party who is an accomplished angler and even guides on the beat when he had announced that conditions were tough, this translates as bloody difficult for us mere mortals.  The river was very low, flow was canal like and this pristine of chalk streams carried an unusual murkiness that meant sight fishing to individual fish was very hard as the gravel bottom was silty and weed beds obscured the fish. 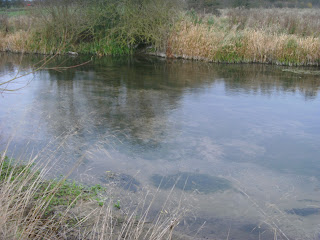 Even though the fishing was very tough grayling were caught ,  none  to my rod I must add.  My success was with a couple of out of season trout. They were two of the very few rising fish that I saw that day.  But the

day was great, interest and enthusiasm constantly refreshed and challenged by the glimpses of the large grayling that populate that stretch I saw several fish that must have been 2lb plus and the beat holds fish that greatly exceed that 2lb milestone. 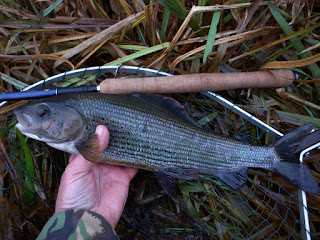 I saw how effective a tenkara outfit can be for close range nymphing and suffered the frustration of missing countless takes as the fish toyed with my less than perfect presentation. When you could cast to visible fish I watched my nymph drfit past them, my attempts at unducing a take were treated with distane. I am certain the my nymph was taken by the fish only to be released within a nano second , my gentle strike seemed to take place about a century to late, 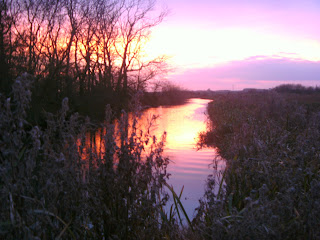 But at the end of the day I reflected on an enjoyable day. It was a lovely river with plenty of good fish there was good company and that ever present anticipation of what the next cast might hold and at the end of the evening there was even a fishermans sunset to send us on our way.

Addenda : I fished this in late 2017 ,  sadly the decent levels of fish seem to have crashed and very few fish remain ..
Posted by Becks and Brown Trout at 19:28

enjoyed it immensely Andy, even though I was the only one to blank!
Regards
Peter

I am not sure what surprised me most, Catching more than you or you not falling in....

That is one fine grayling on the ITO. Looks like a you had fun!

It was a fine Grayling just a shame it didnt fall to my rod...