Autumn is on the way the Grayling are here

Surely the Grayling is amongst the most impressive of our fishes. The grace and colours make the description " the lady of the stream"  richly deserved. It is my favourite fish. 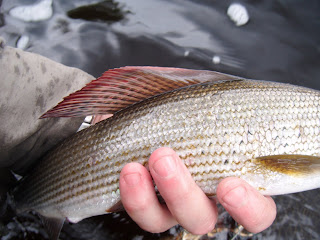 The Ure has now reurned to a sensible level and colour after weeks of extremely low water thanks to  the spates of a couple of weeks ago the river is now at a nicely fishable level.  In the pic below A couple of weeks ago the stones were dry out past the overhanging tree now we are showing a river at a healthy level..  The water now has a deep brown colour but not cloudy.Just like a good strong beer. 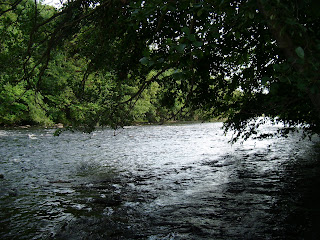 The grayling are in the faster runs but fishing with a dry klinkhammer was difficult the water was so turbulent keeping sight of the fly was a problem . I had to resort to a klink with a bright red foam post.  Not a fly I would pick naturally but given the circumstances,,, 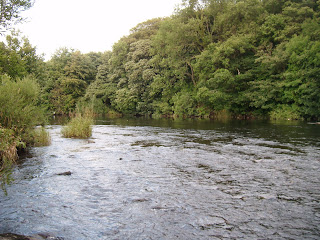 There were were many Olives hatching . You would describe it as a heavy hatch. but surprisingly hardly a fish was seen rising.  I fished a klinkhammer into the faster runs the result was four grayling three of which were of the " three to a pound" variety the fourth a better male fish pictured here.  Not a big fish but a good fish none the less on a day when fish were hard to win.  I didnt see a trout rise all day. 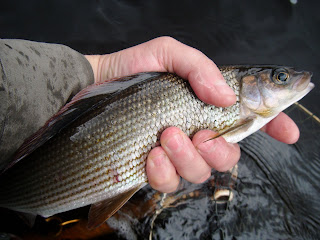 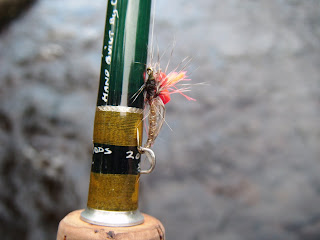 The foam post klink. Not a subtle fly but  workman like and now well chewed .  The Grayling at least seem to enjoy it.  Great for fishing the duo but also good for just staying afloat.  However I muct improve my tying as from time to time the fly was stuck on its side in the surface film,  a position when its not going to fool anything... 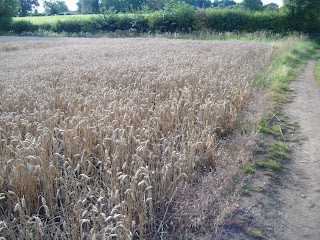 The wheat fields shows that Autumn is on the way.  Much as I hate the winter the months of Sept and Oct can bring such great fishing ,  a late sea trout run and the Grayling fishing can make a stunning end to another year. 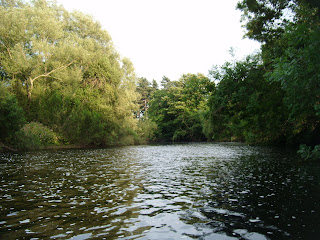 Posted by Becks and Brown Trout at 21:55