I guess a few of you may remember that the post title was also the title of a TV prog many years ago that looked back on the weekand at politics through a humerous perspective .Well this week has made me look at this strange way of life we pursue , Calling it a sport really doesnt do it justice.  Obsession and passion are words which seem to fit the bill better.

As you will have seen from the posts among others I fish the Ure , a largish rocky bottomed river in the Yorkshire dales , a river that isnt supposed to have much of a mayfly hatch well when I fished it the other day there was thousands of big mayflies and the fish were rising beautifully to them.  That was on an afternoon when I nearly didnt travel to the river because of lack of time and the wind that was blowing pretty well. In the end I had the best few hours fishing I have had for some time.

I also fished on a couple of local rivers with the two gents who bid generously for a days fishing with me on my local rivers. That was in Aid of cancer charities. The prospects were good for that day.  Good forecast, the best date for a chance of the mayfly but in the end it was a a real hard day . Low water and bright sunshine meant that the fish sulked and hardly a rise was seen all day.

One thing became apparant to me that day, and that is that it doesnt matter what age you become infected by this obsession it takes hold just as hard...  I think he will read this and hope he doesnt mind me saying but One of the guys was  past retirement age and a bad back was giving him grief and was new to the sport but oh what enthusiasm . It will remain as one of the season highlights seeing his face when he held the trout for the camera. Anyone who wants to fish that much will become a  good angler because he will go when the weather isnt perfect or the water levels wrong. He was eager to learn too. 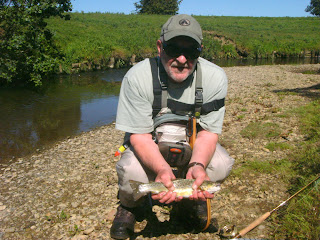 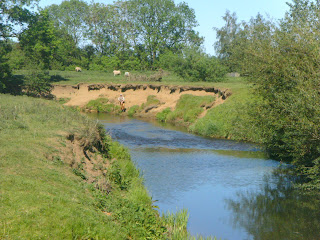 The other guy was a good angler and was happy to be pointed in the right direction and left to fish. I hope he didnt mind been abandoned for so much of the day.  A shame the fish werent more cooperative.

So remember just go fishing , sod the weather if you can go just go. Some of my best days have been on occasions when I nearly didnt go. Days like the day on the Ure just reinforce that.
Posted by Becks and Brown Trout at 00:00

Great reminder. I've had some of my best fishing days, and just best all around times out, during crap weather too. Nice post!