Best fish of the season 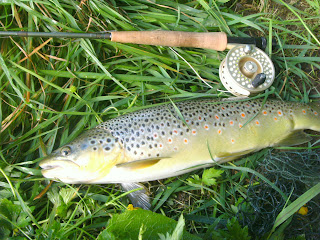 Went for a short session on a local river Yesterday .  Nearly didnt go as the weather was very changeable.  In fact I spent half an hour parked at the river bank listening to the cricket test match on radio as the rain beat down on the car.  After it faired up I went of to the bottom of the fishery by now it was blazing sunshine . This was the view of the river .  Such a pretty view just a shame swans are such unfriendly buggers.  Anyway fished for a while and had two fish to a  mayfly . 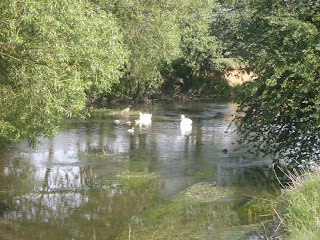 They were not huge but nice enough, then worked upstream avoiding the swans and just got into a deep corner pool and the heavens opened again.  Now how you are supposed to fish a dry fly when its pelting down, but I did although I didnt catch anything. Though I just got wet and tried to shelter from the worst of it under a tree...Anyway I nearly went home but as I walked back to the car the sun came out again and the sky cleared, no wonder people say Britain doesnt have a climate it just has weather.  Anyway the rest of the evening turned out to be beautiful and the showers had maybe kept other anglers away as I didnt see another angler all day.

I worked upstream past the big pool.  I picked up one more fish that was rising tight under the bank and then wasted the best part of an hour trying to get a rise from a small pod of rising fish that were in the most infuriating of places. It didnt seem to matter how well that fly landed drag set in straight away.  During that time I saw smoke out of the corner of my eye quickly turning around I realised it wasnt smoke it was the steam coming of my back as the hot sun dried me out. What we do for fun eh? 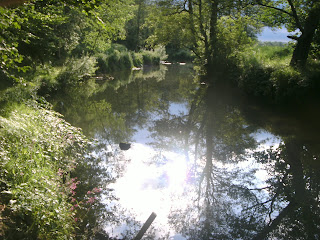 After returning to the car for a coffee break I headed back to the river.  A few fish were rising there were  enough to keep you going but they werent rising with the abandon that can happen when the mayfly are on the water . This year the hatch has been very poor and the fish havent really switched on to them.  I worked my way up a stretch of water casting not to rising fish but to where they should be.  After standing for a while and tying on a new tippet and fresh fly my first cast brought a gentle rise , I tightened and the rod hooped over and a powerful fish dived for cover .

After a hell of a scrap on the little 7ft6inch 4wt St Croix Avid , which I must say handled the fish superbly . I landed the best wild brownie that I have had for many years.  In this part of the world a 1 lb wildie is a good one . I didnt weigh this but it was over 18 inches and was in superb condition. Anyway after ringing to share my good fortune  with the fishery manager I fished for the last hour and had a few more but my mind was still on my best fish of the season... I am pleased to say that the trout swam away strongly and  hopefully we will meet again one day...

Posted by Becks and Brown Trout at 11:42

Good for you for sticking the showers out and landing a very nice wild brown, bet it fought like a ton of bricks !

Very nice Brown! Congrats to you.

Great looking Brown! Glad you stuck it out and were able to hook up.

Thanks for the compliments . I think what made the fish special was just the look of the thing seemed as perfect as a wild trout can get....

That is a beautiful brown. Well done!