Another year ends but has a silver lining...

As this year draws to a close and I reflect on the season there have been plenty of lowspots.  But there have been high spots, which include fishing related ones.  This years mayfly hatch was extraordinary in its abundance and the summer drought whilst taking some of the smaller becks I fish down to their bones allowed some of the larger streams a long settled summer and they fished superbly.  I have fished from the tiniest of becks on the top of the moors and caught trout from pools the size of a dustbin lid and have fished a large river for the first time in many years,  that beautiful river Ure in North Yorkshire.  I intend to return to it many times.

This years pre christmas freezing weather and  heavy snow have done little to extend the grayling fishing.  At first the roads were impassable and then the rivers themselves became choked with ice.  However last weekend I was determined to have one last fish in 2010. But as the report on my previous snow bound fly fishing expedition related I think that for me it needs to warm just a little for the fly rod to return. 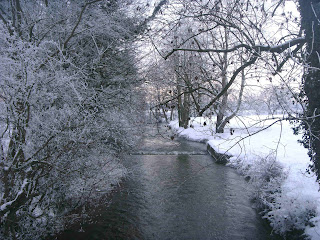 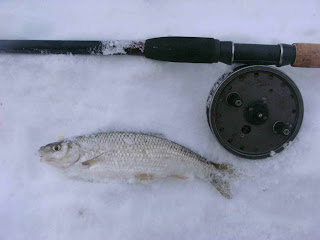 So I decided to get the trotting gear out of the store.  However much I love fly fishing there is still sufficient of the small boy within me to love float fishing.  There is a real satisfaction in watching a small bright float been carried along by the current . Its path relating a constant report on the river bed,  that dragging weed bed the hidden snag that sudden depth drop of.  Properly fished and interpretated watching a floats progress is an absorbing way to pass a hour or two.  The constant anticipation of the bob and slide away of a take lends that endless anticipation.

The fishing on the day as could be expected was slow and the water oh so cold,  But after a couple of out of season small brownies the the float once again slid away , a different fight this time not a trout for sure but what a grayling? , after a short tussle the answer came, a dace.  A fish I havent caught for years.  That beautiful lttle bar of silver came to me to finish the year.  I hope that it is an omen for the year ahead...and  however next year gos that it should at least end with a silver lining.... 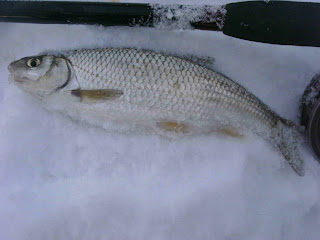 Posted by Becks and Brown Trout at 16:58

Found your delightful blog today, and see we both have the same passion for small streams. I have just started my blog,, and the layout of yours is giving me some inspiration.

Have a look if you wish at;

Good to see someone else likes dace too. Thirty odd years ago I used to look forward to the winter bait fishing at Chatsworth just for the enormous dace that used to live there. Yes the grayling were great but the dace were unbelievably big. It was a matter of discipline to catch them though. No chuck it and chance it worm or maggotting, trotting down searching for takes. It was a case of working out their winter holes and carefully strett pegging for them with anchored, grape-sized balls of soft bread paste. I often wonder if they are still there, have they survived the excessive stocking with trout that has pushed the coarse fish out of so many parts of the Derwent's once great mixed fisheries?