An old itch is bothering me,

I was recently out in the car between home and York .  I drove over a bridge over the river Derwent at a place where I fished probably 35 years ago . As I wasn`t in a rush I decided to stop and take a look at the place I caught my first Yorkshire Barbel.  It was a memorable and strange day that has stuck in my mind for several reasons firstly for the fact I remember well that I had set out to catch some decent chub , So the capture of a first Barbel was a surprise , a modest fish by current standards but at just shy of 5lb a good first fish , sadly in those days a camera did not always go with me fishing so all that is left is a memory of watching my little samson scale not quite hit 5lb  , What was also a surprise was hearing a voice behind me as I lifted the landing net under the fish and turning round to see Michael Clegg of Cleggs people stood on the bank behind me now those young readers will not know him but he was an interesting character a professional museum curator and naturalist  who had a TV show travelling around interviewing and meeting people.  There he was,  large bearded and imposing smiling and offering congratulations.  He sadly confirmed that they had missed the fish capture being filmed but nonetheless he stopped for ten minutes he was interested in the fish as it was the first he had seen in the Derwent and he stayed for a chat until his camera man told him it was time to go .  Was a shame that I didn`t make it on to the TV , my Dad was a great fan of his show he would have been capped ( Old Yorkshire Expression ) to see Son on the TV ,  Sadly not to be .

This is Clegg, older readers may well recall him for the Yorkshire TV series 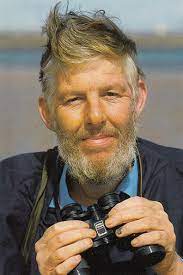 Anyway enough rambling the point is that standing there on the bank a few weeks ago has irritated that old itch to do a bit more coarse fishing , To that end I have opened communications with the club that now runs the stretch of river and am hoping that membership may be a possibility as early as next year .  I even spent an hour in the garage finding where my coarse fishing stuff is stored , It is probably about 20 years since I have done any serious coarse fishing ,  apart from occasional Grayling trips in Winter the rods are still there MK4 Avons , Float rods all sorts Reels too Mitchells , Shimano all carefully put away certainly the lines will need replacing . Luckily the bag with keep and landing nets has been hung up high above mouse range.  Even the bait droppers and float tubes were still good to go.  The seat box was given away years ago ,  Anyway these days I think my rear end and back need something a bit more comfortable .  As I unboxed and reviewed everything on the patio in the sunshine my Wife happened past ,  She just looked at the mountain of stuff , looked at me , shook her head and went back inside after so long married she knows the signs...

The Fly fishing will always be my first love but well I keep getting that itch so watch out on the blog next year for a bit of Coarse fishing ,,,,,,

Posted by Becks and Brown Trout at 09:18