January..Fishing without fishing and bamboo and silk

So January so far I have had two trips.  Most years it is about the same maybe three on a good year.  It is difficult to get motivated about standing in a ice cold river whilst searching for Grayling that are hugging the bottom . Up until Christmas you can console yourself with the hope that around lunchtime with a little bit of weak sunshine a small hatch may encourage the Grayling to look upwards.  Assuming the water is clear enough of course .  But the reality is despite what the books tell you lunchtime rises aren`t a common occurrence. 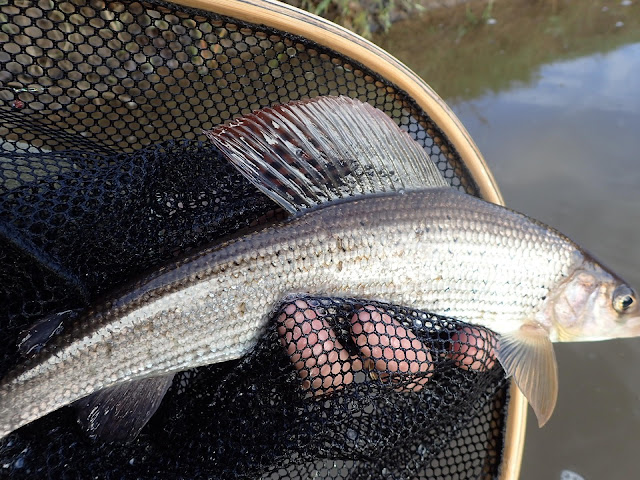 The good thing about January is that the whole business of planning your seasons fishing starts again ,  I have just paid my first subscription which was Jervaulx on the river Ure .  lets hope the rain gods are kinder this year . It fished well for trout early last year.  but the dry summer and brutal low levels made things very difficult otherwise,  Elsewhere I am involved with helping to run a couple of small clubs and the business of getting things moving has started.  The secretaries do most of the work I just tag along  spout a bit of rubbish at the AGM and go fishing.

It is also the time of year when I need to focus on tying some flies and organising the fly boxes ,  The fly boxes always start the season in fine form rows of flies lined up like troops ready for battle at the season start ,  But by the end of the season they resemble the straggled remains of a well beaten military expedition ,  out of formation and in varying states of undress with half their kit missing.  Which also reminds me I need to invest in some new tippet. But focussing on tying flies is a good way of trying to avoid my close season habit of convincing myself I need a new rod or reel or line... Something that I seem to be able to do with remarkable ease ,  despite having plenty of stuff ,  although I guess as my son is now fishing and I am encouraging my daughter to have a go I really do need to consider some new things.  It is amazing how  a little bit of resistance to new purchases can melt away when faced with such blindingly obvious logic.  See it happens every year.  Trouble is fly fishing stuff is so damned appealing ,  A friend has an online fly shop I was fishing with him one day and was catching and he wasn`t he nicked a couple of flies of me that were small and drab and pretty shit looking but they worked ,  he approved but commented that no one would buy anything that looked like that.  Reels that look good just say buy me ,,,apologies about the hideous backing colour but the silk lines are all cleaned and tucked up in their boxes until the season gets going. 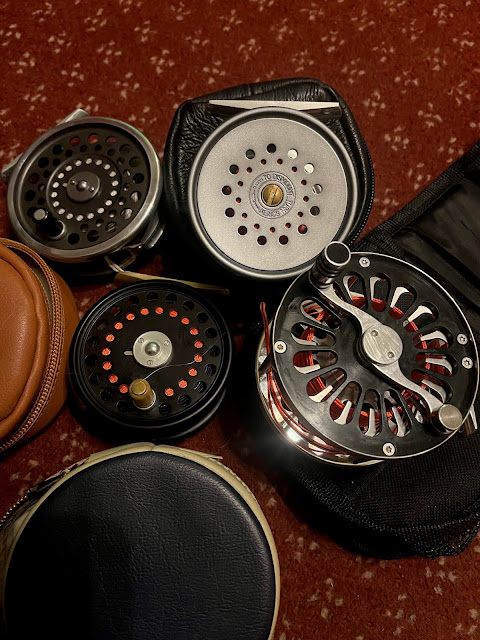 One development and some would say an illogical one in my fly fishing activity has been my increasing interest and fascination in split cane rods or Bamboo as our American cousins refer to it. Many of my friends have said that it is a romantic view and carbon is king.  But on certain types of fishing they fit the bill perfectly and to some extent they are the perfect solution and yet nowadays are hidden in plain sight.  The modern Bamboo rods are a different beast entirely to the heavy things of a few decades ago and although expensive offer good value .  Also along with the bamboo rods I have developed a small collection silk lines , 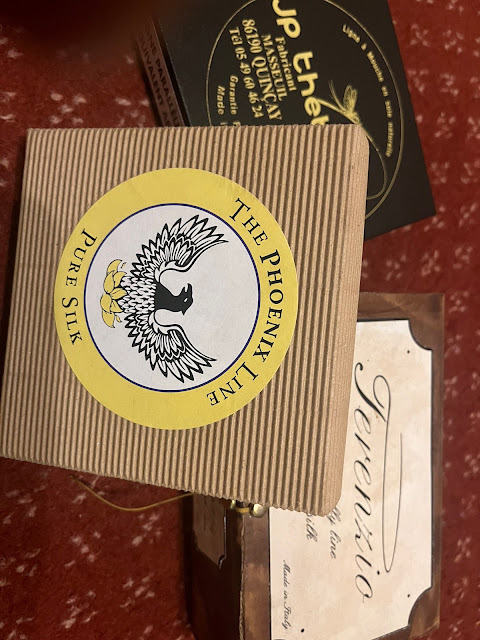 I have never been a fan of fast action rods. Small streams and close range fishing means that improvised casts and roll casts particularly are the order of the day ,   I have found that bamboo rods tick all the boxes and the silk lines are very effective and not nearly as hard to look after as is often stated.  Their  ability to cut through the wind and unroll with such accuracy is brilliant and roll casting is a joy .  The silk line floats on the surface film by repelling the surface tension ,  the Plastic lines sit in it by displacement as a boat floats on the water.  So roll casts benefit greatly both in terms of less disturbance on lift of and more delicacy on the landing due to there smaller diameter ,  I am a convert to them.  there is no reason why you cant fish silk lines on carbon rods.  But to me it wouldn`t seem right and proper.  I am not saying I do not fish carbon any more I still use it the most but on a warm evening fishing the evening rise on a small stream there is a certain harmony from bamboo and silk. 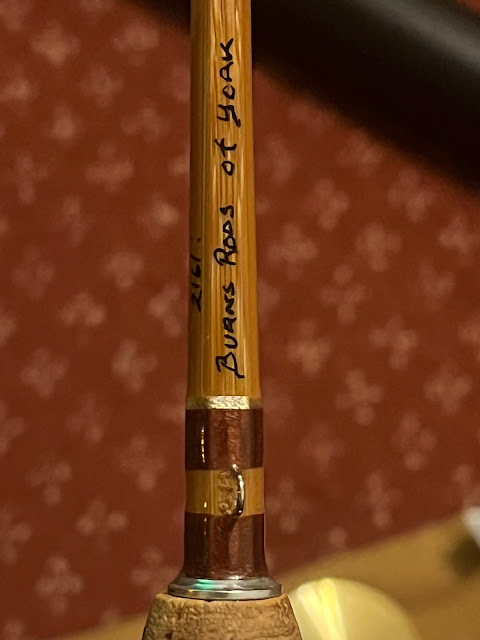 This is the rod that infected me with the sickness ,  I fear it is already to late for a cure.  It has now been joined by some new friends ,

Posted by Becks and Brown Trout at 11:49

Hi, I just read the “Fly Fishing Opportunities in North Yorkshire” page on this blog and I wanted to ask you a couple of things re sea trout fishing along the holderness coast. Sorry for the off topic, but I couldn’t find a way to comment directly on the “opportunities” page.
Do you have any more info about sea trout ? E.g. what time of the year people catch them? Do you reckon Bridlington or Hornsea areas could be suitable spots (I live in Hull but I haven’t got a car so I need a place accessible by public transportation)? Thanks in advance!

there are few traditional sea trout fishing opportunities at Hull. But fish are recorded in the river Hull. Goggle can be your best friend.

I will add a comments cox to the page thats a good idea.