Remembrance of a fishing companion

Sorry dear Blog readers I am going to be serious for a moment.  As we are nearly at remembrance day and it is 100 years since the end of the war to end all wars. I will give thoughts to  the family members who fell and particularly my Grandfather on my Mums side . WW1 veteran Born January 1899 joined up at 17 lying about his age  just in time for  the Somme and then at Passchendaele with the Northumberland Fusiliers.  He was the perfect Grandfather.  Always willing to tell me about the war always full of the tales Grandfathers should have.  Although his tale telling was usually when we were out side the house often in the Greenhouse. Grandma didn't approve of him filling my young head with war stories so usually when I visited them after a few minutes it would be "come outside lad there`s stuff in the greenhouse I want you to see" That's when he was in his territory the house was Grandmas .  Big guy in every sense 6ft tall which in them days was unusual. 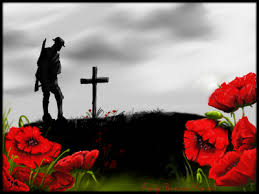 He was very proud of been a crack shot in the war paid 6d a week extra ( about two and a half pence in today's money)  .  He was a devil with cards and told me loads of time about him fleecing his army mates of their money.  He never gave an inch when playing cards with me either guess he thought I should learn the hard way. I do wish i had been older when I knew him there are questions I would love to have asked him with a more mature head.  He had a elder brother who died at the Somme. Also on my Dads side of the family there were two victims of the war Sydney who is buried in Belgium and won the MM.  Visiting his grave a few years ago was a sobering experience .  There was another brother who until recently I was not aware of he was invalided back to England in the war after been gassed , He died after a couple of months .  What a terrible waste it was.  I bet they would have all had made good grandfathers given the chance . 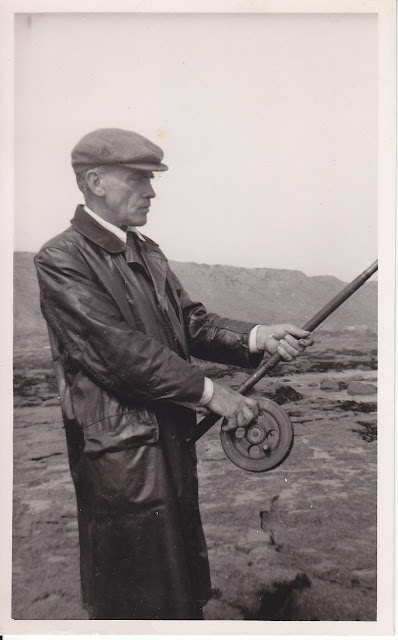 As can be seen in the picture he was a keen sea angler to .  I remember with immense fondness our trips together as much for his company as for the fishing .  I remember a day we were fishing on the sea front at Scarborough . That rod Lent against the railing and the lead weight about 40 yds out firmly anchored on the bottom .  Along come three Blokes on holiday.  "Doing any good mate "  was said to Grandad , had a few came his cheery response , "Wheres your float Gramps " quickly followed . Now knowing Grandad wouldn't like the term Gramps I wondered what his response was , "That's it out there lads" was his response as he pointed to a Crab pot buoy about 400 yds away .  Giving me a sideways glance and wink.  What happened next was unexpected as Unfortunately the three blokes proceeded to lean on the railings to watch his float for activity.  After about ten minutes I couldn't resist a cheeky "isn't it time you checked your bait Grandad " the result was another glance and a friendly scowl.  Eventually the three lost interest when they had moved away he bust out laughing I thought they were never going to go he said .  Its worth adding we should never complain about modern rods and reels . I still have the rod and reel in the picture . It weighs a ton. and casting a 8 oz lead weight with that gear is I can tell you difficult and is it some risk to your hands and knuckles as that 8 inch Scarborough reel has no brakes.  No doubt our generation has had it easy in lots of ways.

Posted by Becks and Brown Trout at 17:01

Great story. As you know, following NCT, I've been researching my ancestors. I have stumbled across several who died in WWI and are buried somewhere in France. It's a very eye opening experience.