Best part of the day

This weekend was the annual August bank holiday.  Which living in a tourist town is a real double edged sword.  The town needs the money the visitors bring .  The crowds, litter, traffic jams and campfires and rubbish up the beck are the flip side of the equation.  Also the weather usually manages to behave in a proper bank holiday manner.  Heavy rain and strong winds are the usual and sure enough in the run up to the weekend we had seen havy rain which had put all the local rivers up which meant any fly fishing was scuppered .  My only chance of any fishing was on my local beck where the recent overnight spate and suitable high tide late at night gave a chance that an early sea trout would nose up the beck. Saturday early weather forecast  promised a window of opportunity, to be honest all in all a pretty remote chance but just realistic enough to make an early morning trip up the beck more than just a folly. 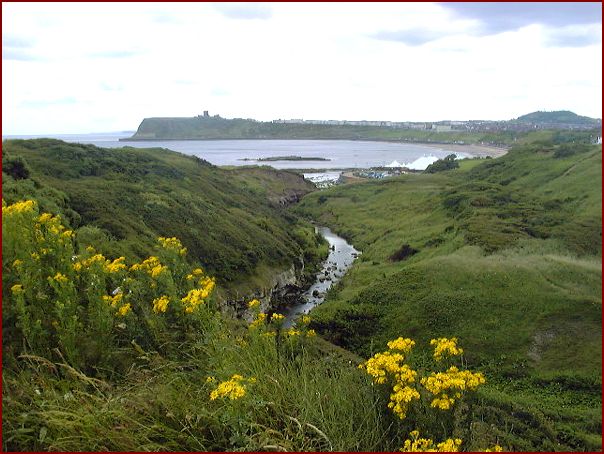 The morning was perfection , the north sea was like a mill pond allowing the castle to cast its shadow on the sea .  Only a few hours later thick clouds had blown in bringing a heavy swell and rain.  Sheltering visitors arriving mid morning missing the early morning splendour.  Oblivious to having missed the "best part of the day"


Climbing up from the sea front and looking down into the valley gives a glimpse of the beck hidden in the valley bottom.  Clambering down to the first pool its hard to realise that the high tide line is only about 70ds below this first pool.  The fishing is about searching the sea pools with a spinner , usually a mepps, chucking metal as the unkind call it.


Another two hundred yards up stream the bankside is covered like a cottage garden border. I love this stretch of the beck , Wild orchids compete with basking slow worms to grab your attention.  This deep slow pool has delivered up some fine fish in the past.  Truth is there probably hadnt been enough of a rise in water to make running fish very likely neither was it late enough in the year to make running sea trout very likely.

Heres a pic you wont see very often on my blog my old faithful shakey spinning rod and ABU cardinel reel.  A combo that Ive had for probably ten years and gets used about twice a year.   Truth is I am not a great fan of spinning after a couple of hours Im bored. It just doesnt float my boat .  I am not saying its unskilled because in its way it isnt .  Fishing the spinner well is indeed very skilled and we have a few guys in the club who are damn good at it . But I aint one of them .

I have caught sea trout in the beck on them but the big deal for me was catching one on the fly years ago.  But this morning ended up been a walk by the beck with a rod for company but without a sniff of a fish.

A lovely report. Hope the final few weeks of the season are fruitful. Regards, Colin. P.S. I really do enjoy reading your blog keep it up!

I'm not a fisherman, but that's my type of fishing. A slow running river with no-one around. My only problem was actually getting something on my line; it interrupted my snoozing.

Very nice blog. I like reading it. Keep enjoying your fishing time. Thanks for sharing such a nice relaxing pictures!!!!!
Kelly