Something missing and something found..

Over the last 9 months or so  or so. Something hasnt been right , not the weather or anything else tangible but inside me.  I have felt as though something has been missing.

Then the other day  I think a part of the answer came to me I was somewhere near Peterborough sat on a train heading back from London towards gods country wedged on an aisle seat between passengers frantically trying to preserve their personal space whilst standing in a crowded train and on my left I was wedged against a fat woman who had an iphone in one hand a kindle in the other, a laptop on her knee on the keyboard of which was balanced a bag of toffees which she was juggling to her mouth by balancing them on her mobile and steered them towards her mouth.  I must confess to being hypnotised it was like watching a cat toying with a half dead mouse whilst batting a ball of string around.  I looked around me deperate to avert my eyes and everywhere I looked I saw people staring at mobiles or with headphones on and eyes shut oblivious to the world about them. The astonishing thing was that I was the only person not on a phone or with a laptop.  Then as I trie'd to look out of the window I saw it, that unmistakeable twinkle of a river only a fleeting glimpse from the train but a sweet looking stream none the less with the sunshine sparkling along it . 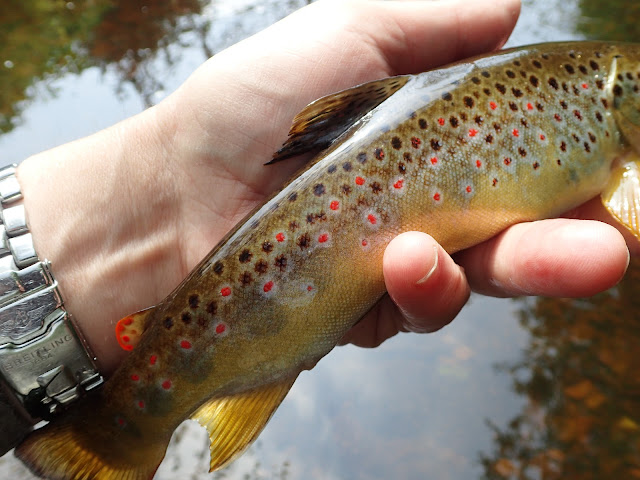 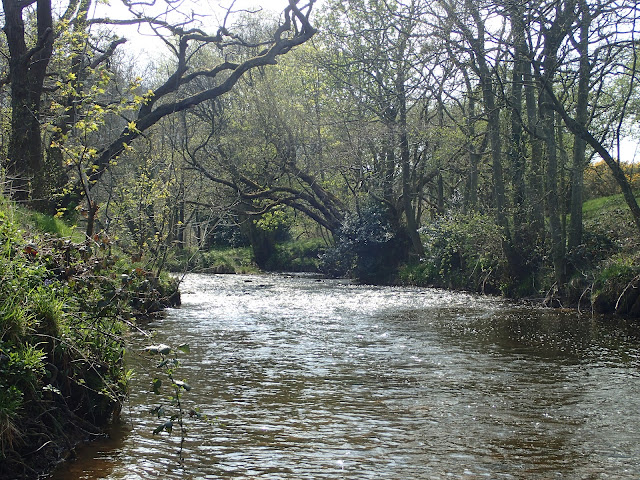 It was then that it dawned upon me what was missing, actually there isn't anything missing , frankly what is wrong. There are too many people and what was missing was solitude. The sight of the stream made me realise how long it's been since I had a proper days fishing .  Now to me a days fishing isn't just a statement that I have taken a rod to the river to deceive a trout.  "Gone fishing " is more than just a saying its a statement that you have entered another place entirely . Less to do with fish and more to do with a state of mind .Henry David Thoreau had it right " Many men go fishing all of their lives without knowing it is not fish they are after " 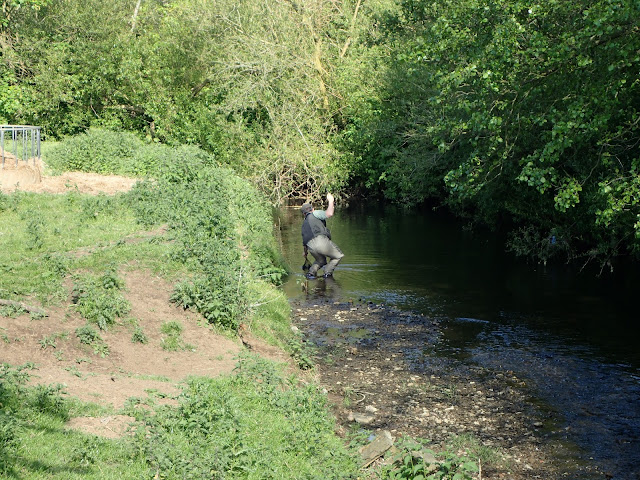 With my renewed urgency I knew I had to do something about it. So a couple of weeks ago the winner of my WTT auction lot on the Yorkshire Dove enjoyed reasonable weather and although it didn’t show its best at least the stream gave us both a few rising fish.  On the day I even saw an odd Mayfly Dun, surely a harbinger of summer if ever there was one. Either I missed them or the hawthorn “hatch“ this year failed to materialise to anything much. Sure I caught the odd fish on them but I think the really cold spell we have endured has messed around with the rivers clock. 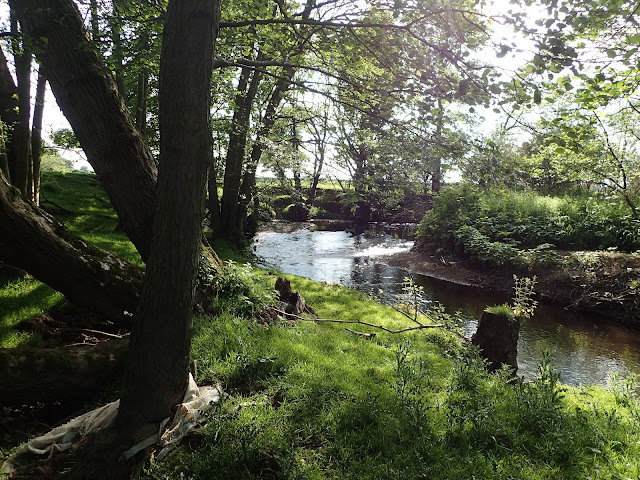 Only in the last week has warm weather really showed its face and as my long suffering wife was working all weekend what’s a bloke to do but go fishing,  I visited the Yorkshire Derwent a river that is a  mere 10 minutes from my door and a delightful place to while away a few hours.  As I arrived the usual car parking spaces were full of cars, picnickers and walkers as well as the odd angler people were in abundance.  Like migrating birds people seem to arrive in flocks with warmer weather.
Parking up I wandered down to a favourite starting point in anticipation of fishing the riffles and broken water up through a tree lined section.  It was a very hot and bright day.  I figured the shade and broken water was the place to be.  After about half an hour I rounded a bend to look up a long straight which is a series of shallow pools and faster water.  Now about 15 yds above me was a favoured crossing point for anglers, the steep banks have wooden steps down into the water on both sides as it’s immediately adjacent to a car park. 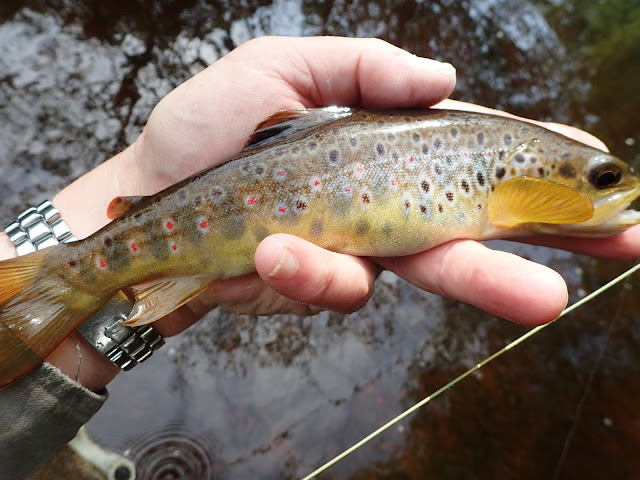 The keeper does a great job in maintaining these steps as many of the members are not as agile as they once were.  Anyway as I looked upstream I thought I saw a dimple right under the bottom step.  Sure enough there it was again a definite rise.  Not sure what it was rising to a size 20 IOBO was on the tippet and  without moving a cast was despatched and second drift it took.  Not a huge fish but a very nice wild brown and probably the best of the day.  After I released it I waded up to see where I had taken it and of course when you think about it a perfect lie.  The fish was sitting right in the foot hole as people step down of the steps.  It got notice of approaching anglers as those from the steps above and the opposite bank would be in plain sight.   But not only that it would bolt upstream and probably spook a good few.  Certainly this anglers future approach to that stretch has now been altered forever. 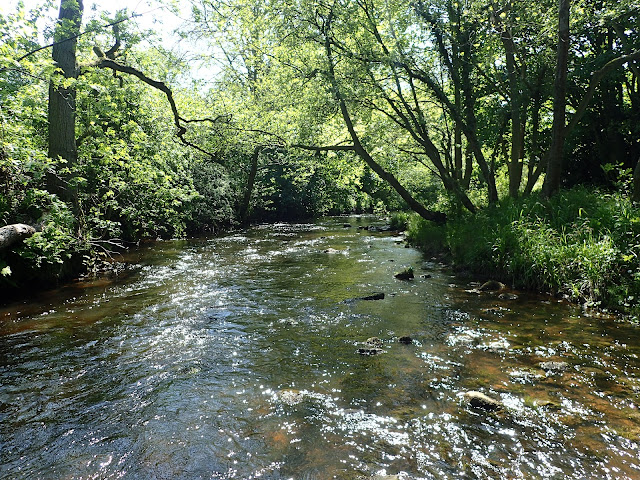 As I made my way upstream picking of small wildies in the pockets and broken water. “Skinny water” as Dave Southall and others refer to it.  I came across a father and son fishing in a deep long slow section stood midstream and short line nymphing, stood in the sun it looked hard work and slow going, Son was fishing and Dad stood behind.  Must admit to some envy as sadly neither of my two sons or my daughter has ever showed signs of sharing my obsession.  But it did occur to me that they would have had more chance of success and fun in the faster water picking of risers. But I am also sure that such thoughts are best kept to yourself. 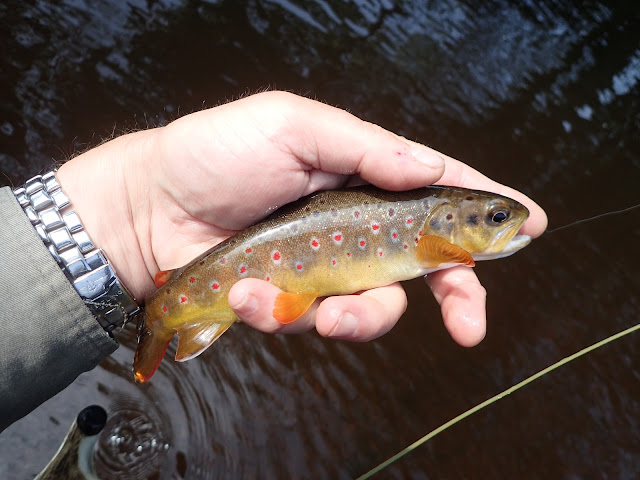 Anyway I moved of upstream.  As the afternoon developed the cool breeze got up and the rising fish disappeared but I had fished for say three or four hours and ended up with 20 + fish , none large but tremendous fun.  With a lesson learnt and knowledge stored away for the future as well. In all a very good result.

Posted by Becks and Brown Trout at 22:09

Nice pattterns on those trout, and great pictures. Thanks for sharing.