This year I am way behind with things.  Jobs around the house, work everything. My crumby start to the year has left me playing catch up.  Work has come first and now I am back on course with that. Now jobs around the house have been prioritised; Two categories; more urgent than fishing preparation and not .  After careful thought the more urgent list has become quite short and dealt with quickly, its worth saying that the shortness of the list was the matter of some discussion between myself and my good lady.

Most years my fly fishing preparation starts with fly tying which usually starts straight after christmas and the vast majority of my fly tying is done in January , February and March. Fly tying whilst been enjoyable is not the fascination to me that so many fellow fly anglers enjoy.  I tie flies because I am largely disappointed in what you can buy.  CDC flies seem to be very difficult to get and any fly other than a size 14 or 16 was hard to buy when I started tying.  My tying is best described as fit for purpose ,  the flies catch fish but wouldn`t win a prize.   I suppose I should put more of my flies up on the site it may persuade those who either don`t tie there own or who have tried and failed to realise that the flies often shown on the net as superb examples are no better catcher of fish than those with scruffy hackles, untidy heads and lumpy dubbing.  Something my own examples demonstrate to perfection.

Years ago I bought a copy of Oliver Edwards fly tyers masterclass and I set myself the task of creating the mohican mayfly .  After countless hours and I mean countless I produced half a dozen passable examples. The mayfly hatch that year was heavy and the fly worked a treat but my old faithfull packing foam special as below worked just as well and lasted longer.  Also I was a lot more likely to risk that tricky under the bushes cast to dislodge a good fish when the fly hadnt cost me hours of effort and many cups of coffee.  Now I am sure that under certain circumstances that mohican mayfly would perhaps fool a fish my simple pattern wouldn`t but in my world of percentages I will stick with something simple. 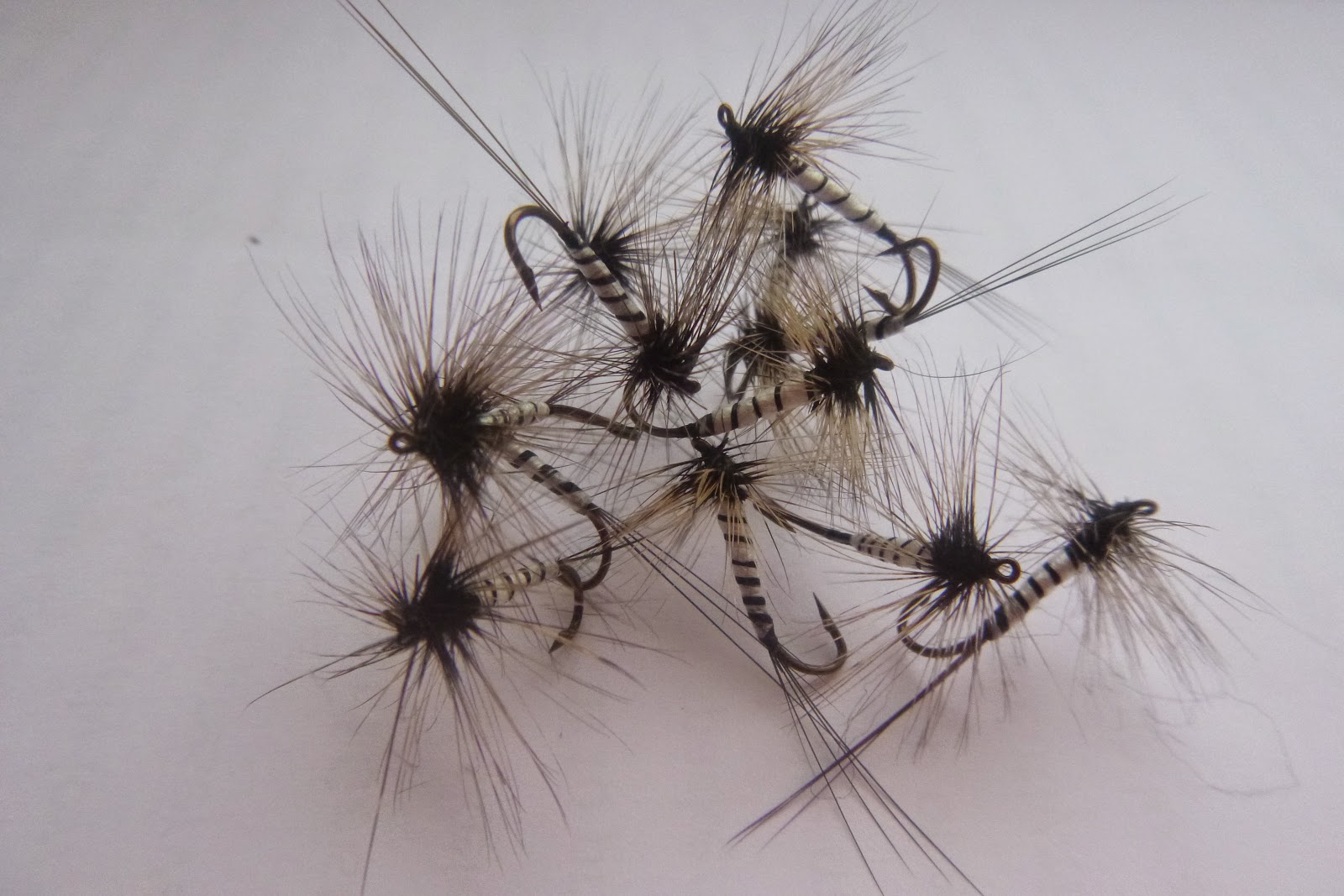 For the interested amongst you this is the pattern I have used a year or two. The foam body makes the fly just about unsinkable , the fly is dead simple tails are black micro fibbet or PT fibres if you dont have microfibbets ( paint brush fibres also work well) the body is that really thin packing foam you get around electrical items. I cut it into 2mm strips and wind it on ,  the ribbing is black floss . Hackle is of course a badger hackle. The hook is a size 12 longshank from a packet I have gained over the years their age betrayed by the fact they are in a small wax paper packet and the size of the hook barb which I have flattened with pliers.

Anyway I will continue through March and hopefully restock the boxes before April which is trout season around here.  I may even show a few more of my efforts to inspire the struggling amongst you and to amuse the more accomplished.....

Glad to hear you're feeling better Andy - all the best for the coming season, I hope you have a good 'un!

Cheers Matt and you too...