Shorter days and colder nights foretell the coming of winter there has been a frost and this week has seen mornings with shrouds of fog and fallen leaves starting to carpet the roads and verges “Taking of their clothes before going to sleep” was how my Grandad described autumn trees to me when I was a small boy. It is a time when all angling opportunities need to be seized, the slide into winter offers less and less opportunity for fly fishing. Both myself  and the grayling become lethargic once Christmas has arrived. January and February ..tend to be the time when more than any other I tie flies and contemplate the forthcoming season.  March is keenly anticipated but to often does not realise its is spring time

Regardless of the calender I view the first of October as the first day of Autumn, the trout season has now finished and the ladies of the stream the Grayling become my target for the next few months. I have come to regard them perhaps even more highly than the brown trout. Present in the local rivers since the last ice age they are a fish of simple beauty and offer an enigmatic quarry to pursue through the winter. They really do offer the river fly angler a quarry that reaches its physical peak as the rivers head into winter. 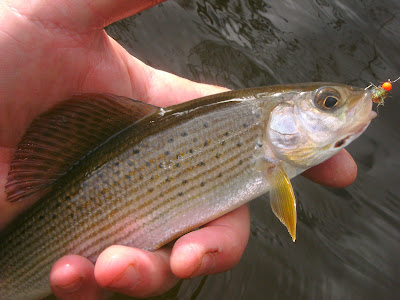 A recent weekend was my first in pursuit of the ladies. I started with dry fly but catching three brown trout on the bounce made me switch to a nymph to try and find the ladies. Above was the first Grayling of the season , small but showing the beautiful markings and delicate lines.

This out of season brownie was one of the few I caught that day . I do not recall a season end where the brownies have been in such superb condition some of the local becks seem to have been brimming with above average fish. 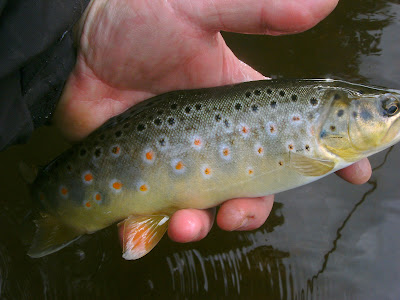 So far this month I have fished little a solitary trip to the Yorkshire Dove and a visit the Ure with a guest when the river was high and coloured .  The wading was challenging and the fishing hard but a few fish were caught.   For the next few months fishing is confined to weekends and short visits.  Restocking depleted fly boxes is now a priority .  One recent development is courtesy of my good lady who after suffering years of me spending winter evenings in a different room to her tying flies has bought a new bureau for the lounge its tucked away in a little corner and half of it is all for me After years of working at the dining table I now have a fly tying station .

Its next to the wood burner and comes with its own bottle of malt. Suddenly the winter doesn`t seem so bad

Email ThisBlogThis!Share to TwitterShare to FacebookShare to Pinterest
Labels: Grayling

cant beat it Andy, the malt is a definite bonus.

Is that a bottle of Bowmore I spy?

it is indeed Bowmore a great aid to tying I find....