Blowing the Cobwebs away

I think I am getting old,  today after a fishing trip the process of getting out of the neoprenes resulted in me breaking out in what can best be described as a muck sweat, if I was so foolish to engage in a post christmas weight loss routine then my exercise routine is sorted.  Whoever created neoprenes clearly intended them to be a fiendish torture tool for the overweight and underfit. 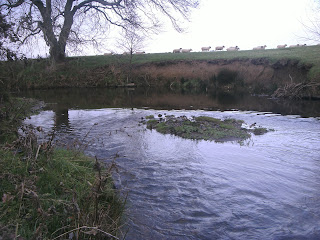 The day started well the wind had dropped the weather whilst been cold had been settled long enough for the rivers to settle and fine down.  Fishing trips at the moment are at the mercy of the shorter days and wayward river levels so the opportunity was siezed, I fished czech nymphs, a method that I can use but one that doesnt give me the pleasure of other methods , three hours of concentration and repeated casting resulted in one sprat sized grayling and a potential case of repetitive strain injury.   For the last half hour the sight of a rising fish inspired me to revert to a klinkhammer. There is something uplifting to the spirit to see that surface fly drifting with the current.  As I have posted before I am a slave to the method and know  its a habit i need to to kick but a depressing december afternoon wasnt the time to go cold turkey.

The rivers are curious this year.  The cold water has dropped clear and the water reveals that the summer weed beds are still intact.  We have had no really cold temperatures and no large spates to rip out the summer weed beds,  it will be interesting to see what effect this will have on the river next year if the weather pattern remains.  Even the sheep are still out on the bankside pastures , which are still displaying an unusual degree of fresh growth.

Anyway tomorrow brings a new year,  I wish you all tight lines for it.  My fly tying starts in earnest now to fill those boxes ready for the new year . First will be my new found delight . North Country spiders. Watch this space.
Posted by Becks and Brown Trout at 10:04

Good luck 'fishing away' the excess of mince pies and turkey. Come May and those neoprenes will slide on. I'm looking forward to future reports.
Regards
Alan

Now you know how a woman feels putting on panty hose. When my wet suit got too tight, I gave it to my son. Now it's too tight for him. A wet suit passed through the generations.

Don't feel too bad, Christmas is a devil for me too and I'm only 18... the first few post-new year rugby/gym sessions have left me feeling about 3 times my age!
Tight lines for 2012 :)